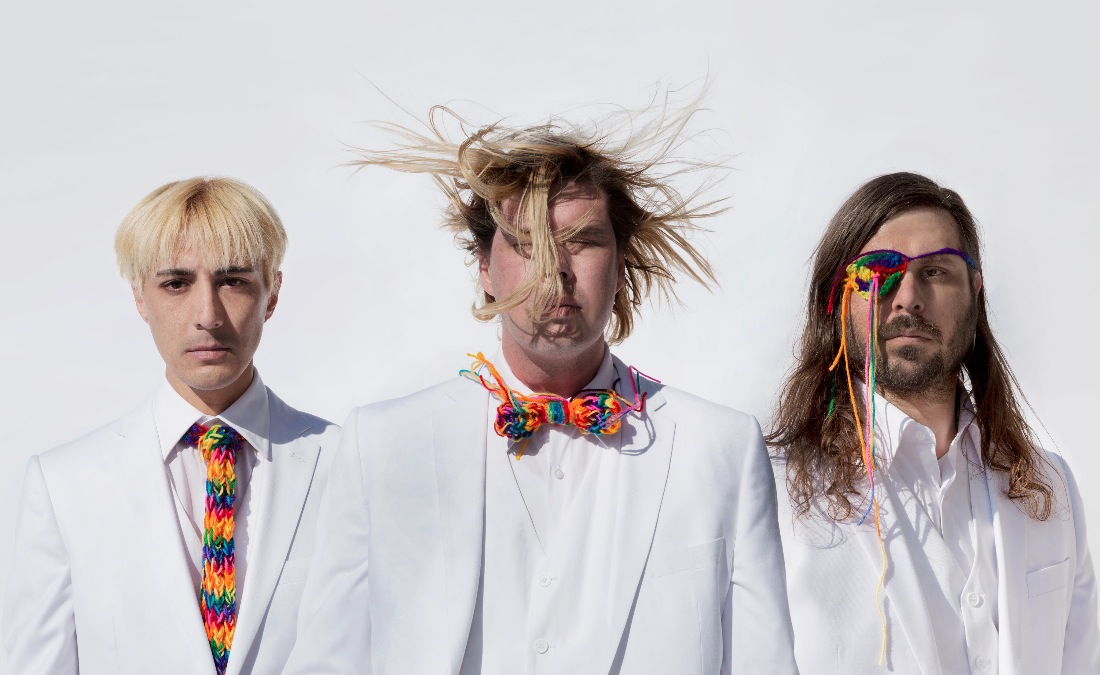 LA-based trio Liars are back with their seventh album Mess. It’s abrasive, it’s fun, and at times it’s completely terrifying (Check out my review here). We had a chat with singer, Aussie-born frontman Angus Andrew about the ideas behind the new album, performing electronic music live, and the concepts behind conceptual art…

How long did Mess take to record?

Not that long really, maybe a few months, it’s definitely one of the shortest amounts of time it’s taken to make a record.

You’ve said that with Mess, the aim was sort of to put the fun back into the recording – how did you do that?

Just by being spontaneous, and not overthinking everything too much, which we can fall prey to pretty easily. I think we had learnt a bit more about using the electronic tools that we were interested in, so it allowed things to flow a lot better than on the last record. It was just about working fast and having fun with the choices we were making rather than worrying about them too much.

It’s interesting you say that – when I was listening to it, there were points at which I wasn’t sure whether it had been recorded spontaneously, or if they’d been written really intricate to make it sound spontaneous

How did you come up with the idea for behind the Mess on a Mission video?

We collaborated with a Spanish director called Luis Cervero, he had some pretty crazy ideas. At times I didn’t really even know what was going on, it was a pretty bizarre shoot – but I’m glad it worked out.

Mess on a Mission deals with idea of feeling anxious and overwhelmed about everyday decisions and choices. What were some of the other concepts you wanted to explore throughout the album?

Those elements of anxiety and fear that have been there throughout the music we’ve made, even though we’ve done some pretty different types of records. Really with Mess it was the first time that we acknowledge those flaws in ourselves and tried to push them towards a more cathartic, optimistic result. It was the first time we did that.
I think it’s interesting how you were describing your experience listening through, it’s pretty similar to the way I was thinking about it in terms of a mess. I’ve always liked this idea of artwork on the borderline between whether or not that is something that is very detailed and worked on, or if it’s just something the artist has slapped together. It’s that classic scenario: if you go into a gallery with someone and they’re like, “Well I could’ve done that at home.” I always really liked that idea because it really shows something about how subjective your perspective is on these things, on artwork and music and the way people internalise what they’re seeing or listening to. There are elements in Mess where things were very worked on or agonised on, but the idea really was to make it quickly, and to force it on ourselves that in the end we didn’t really know if it was a mess or something that was very strategically figured out. And I like that duality of it.

Mess is sequenced different to your past albums – the first and second half are so different. Previously it’s been like one heavier track, one softer, one heavier, but Mess build up completely, and then it tapers off. For me, it meant that by the time the album came to an end, a lot of that earlier anxiety and uncertainty had resolved.

Yeah, it’s interesting. I’d always felt like the sequencing of one track verse the other kind of flow was the way to do it, and it had something to do with tension and release. With this one I really wanted to think about it differently, by establishing a level of intensity and keep it there for a while, and then allow the second half of the record to be something a bit more abstract and cerebral. I hadn’t really ever considered doing that, and I liked this way of doing it.

Have you thought about how you’ll perform it live?

Yeah, we played quite a bit of it in a run of festivals at the end of last year, before we’d finished making the record, and we got a sense of how to do it then. It’s always a challenge. It’s a quandary with this kind of music that is mostly generated within the computer, how to inject an element of physicality to it which , which I think is important. It’s like making a new record, you’ve gotta rethink everything  – the instruments and how to make the sounds.

Are you planning on a trip back to Australia any time?

Yeah, I think we’re supposed to be there mid-year, that should be good

In a recent interview you spoke about how you really liked The Knife, and their performances – how they treat their gigs more of a physical performance than a gig. Do you think Liars would look at something like that?

Interesting question, I actually went to see them last night, and I don’t know, honestly. I really command and admire what they’re doing, and I think it’s an important, really interesting statement, but there is a part of me that yearns for the reality of someone actually doing a guitar solo. It makes me sound very traditionalist, but that’s what’s interesting for me, about how I reacted to the show I saw last night. I really loved it and I loved what they did with it, but at the end I was almost drawn to a more traditional approach to music and performance than I had been before I saw it.

Yeah, I find that whenever I see an electronic performance I find that it’s so much stronger when they incorporate live instruments. I imagine that’s the big challenge with performing Mess

It’s true, it’s a very modern-day dilemma, and I think it’s great that The Knife are addressing it.

In that same interview you spoke a lot about how you’re fascinated by conceptual art and conceptual artists. You spoke about the idea that the the idea which the artist instils is more important than the final product – do you think of Liars in that same way?

That’s a good question. The way I can relate to that issue as an artist myself, is more to do with how I judge a successful project or a record – what I feel like I get out of the process of making it. Rather than necessarily how people respond to it, or whether people love it or hate it. For me, a great record that we make has to do with the period of time in creating it, not so much the end result of what that is in terms of other people’s minds. I guess that’s my relationship with that idea.

And how did you find the process for Mess?

Well it was really successful in that way. My goal was to make it this fun , expressive, exciting process that wasn’t too bogged down in an over-intellectualisation of the process, so it was really perfect in that way. I was really happy with it. But it’s quite often that I’m happy with the way a process goes because I set t it out that way, and more often than not the process goes as I hope it will. That’s why I’m still making music – I’m happy with the way I’m still making it.

In the future are planning on exploring electronic music more?

It’s hard for me to say at the moment, but I wouldn’ t be honest if I didn’t say that whenever I finish a project that involves a certain way of working, I always yearn for a completely different perspective on making things. For example, the idea of sitting in a blank room with an acoustic guitar and a microphone sounds really appealing right now. It just works that way for me, I’m not sure if that’s what’ll happen, but that’s my knee jerk reaction.

Were you listening to anything in a particular during the writing and recording?

I’ve really figured out that the best thing for me, while I’m writing and recording is to block as much stuff out as possible. I find that when I’m honest with myself, I’m a pretty easily influenced person. I could get in the car and drive down the street, turn on the radio and hear a Nirvana song, and then come back into my studio and really just wanna make that kind of song. And that’s not really the best thing for me when I’m trying to focus on an idea that I’ve begun, or something I wanna achieve. Ultimately the best thing is to try and make sure I don’t listen to anything, so what comes out of me is really what I wanna hear.

Mess is out now. Get it here or here