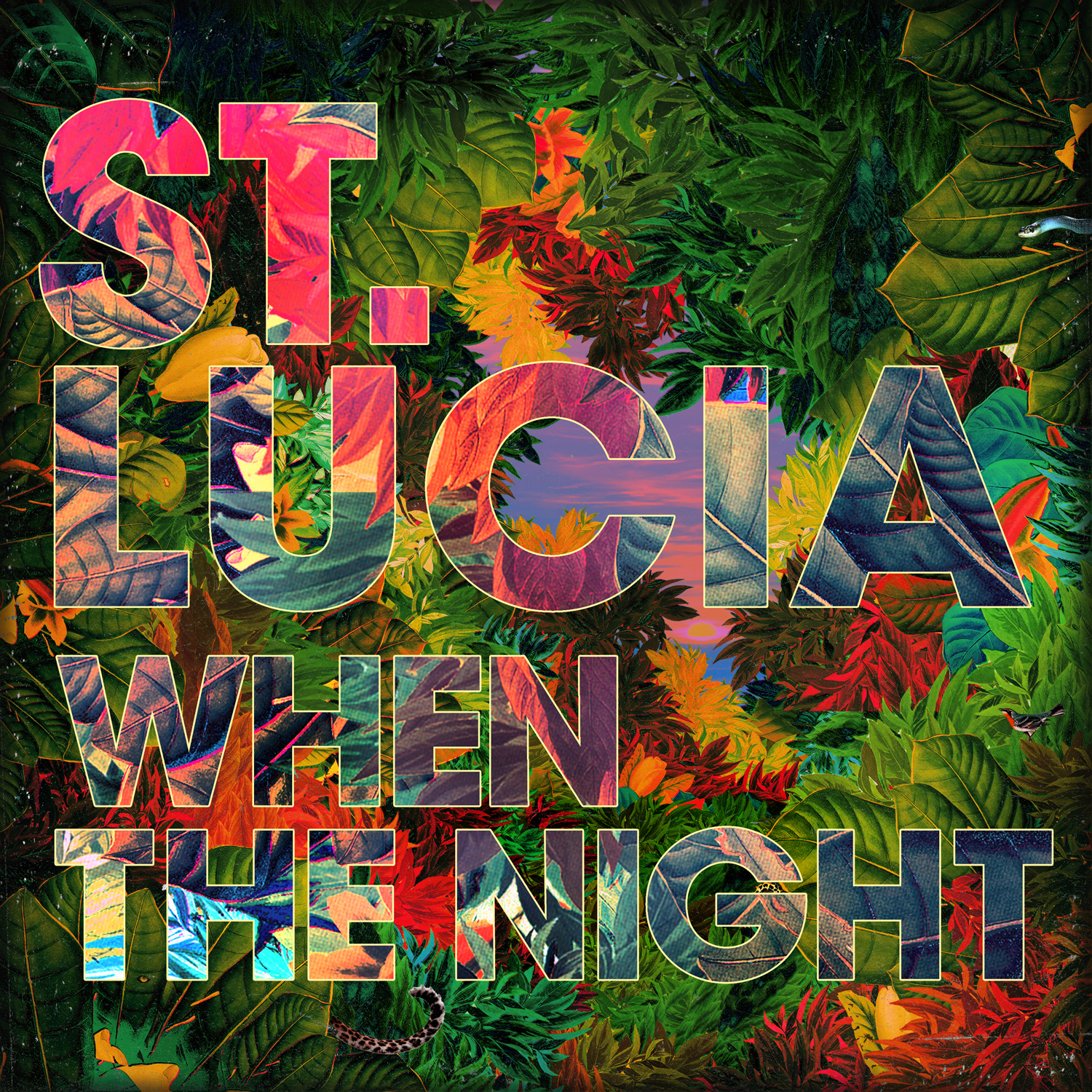 Jean-Philip Grobler, whose music project goes by the name of St. Lucia, is currently touring around Australia. Supported by The Griswolds, his first gig is at The Zoo in Brisbane. We caught him this morning to have a chat prior to everything kicking off.

Hey mate, how you liking Brissy?

Great, beautiful weather. We went to the koala sanctuary yesterday, and then to Surfer’s Paradise as the sun was setting. So it was a really perfect day.

Last time you were here, you were touring with Parklife Festival. Now that you’re back, you’ve got three headline shows in Brisbane, Melbourne and Sydney. How do festivals compare to your own shows, and which do you prefer?

With your own shows, you’ve got a lot more time to make sure everything is right. With festivals, you’re kind of flying by the seat of your pants. You get on stage and just hope everything works. There’s very little time to set up. But there’s also this amazing energy in playing for a whole bunch of people. There’s great things about both.

You have a decent following down here Aussie land, your last album, When The Night, was received really well. It got a fair amount of airplay on the likes of Triple J, our national youth broadcaster. Did you ever think your music would be so far reaching?

I always had high hopes for my music, but never had high expectations, if that makes sense? I hoped it would go far and that we’d be able to come to places like Australia, but I never really expected to. So whenever we do hear about being successful somewhere, especially so far from where we live in New York, it’s really exciting. It make you kind of think, “Oh hey, maybe we were doing something right for a fleeting moment in time.” Haha.

I think the way your music first reached me was through playing FIFA on the Playstation.

Yeah, September was included in the soundtrack for one of the games. Given that FIFA sells millions of copies, how do you feel about the exposure that it gave you?

I feel like games like that get into homes in a way that something like radio, or blogs, or publicity can’t. You have all these people buying the game, who maybe don’t even pay attention to music, or anything on that side of life, listening to your stuff. My wife, who plays keyboard in the band, and I, we take this kickboxing class in New York, and one of the instructors actually knew us through playing FIFA and hearing our music. And he’s the sort of guy you can’t ever imagine being into our stuff, so it shows what kind of audience you can reach through something like games.

Totally. Opens you up to a whole new demographic and market. I didn’t know you did kickboxing, that’s pretty intimidating.

Haha. I try not to beat anyone up. It’s more like an aerobics class that features kicking the shit out of a padded bag.

Haha, so now you can quickly dispose of anyone trying to jump on stage.

Haha. So you’re in Australia. First show of the tour in Brissy tonight. It’s appropriate to ask: who are some of your favourite Aussie artists?

Oh man, Cut Copy! I really love Cut Copy. Tame Impala, The Presets are great, I was a really big Powder Finger fan back in the day, Cat Empire, Nick Cave, obviously. You guys are really blessed with an amazing music scene. It’s incredible for the size of your population, the number of great bands and artists you produce. And Kylie Minogue of course. Love Kylie Minogue.

You’re with Neon Gold, along with the likes of Passion Pit. Another band with them is Haerts, who you’ve worked with as a producer. How did that compare with producing for yourself?

It’s like wearing a different thinking hat. I find I get caught up less with the nitty-gritty stuff. You’re not personally involved with the music, so it’s freeing and enables you to be a little more experimental than what you might be with your own music. When I’m working on my own stuff, I get so caught up with trying to think of the big picture at the same time as the little details. And thinking about how the song is going to affect my career. With someone else’s work, I’m thinking about them. It’s almost like taking a vacation from yourself. I really enjoy it. It’s great.

I’d definitely say multi-national musician. I lived in South Africa til I was 19, and that was my childhood and adolescence. Then I went to England for four years in Liverpool, and now The States for seven and a half. So I’ve definitely been formed by a huge part of all those music scenes. The really interesting thing about being a musician in The States, is that everyone is working at such a high standard, so it forces you to work at your highest level at all times. Which is both daunting and inspiring at the same time.

That African influence is really apparent in a number of your songs. Is that a conscious thing, or will it always be inherent in your music, given your upbringing?

I think it will always be there. When I make my music, I really try not to think too much, or too consciously about stuff. I don’t go, “Oooo, I’m going to make an African influenced song now. And now I’m gonna make an electronic inspired song.” I think whatever I’ve been listening to, will filter through my sub-conscious somewhere.

There’s a real 80’s throwback vibe to your music as well, really nostalgic. Who have been some of you biggest influences?

You should hang out with my mum; she loves Fleetwood Mac. I kind of grew up with it.

Yeah my mum as well! That’s how I got into them too. Well it was only really later on in life that I embraced them as a band that I love.

Yeah, it’s not cool when you’re young to like the same music as your mum.

From that era I love Peter Gabriel, Kate Bush. On the guilty pleasure side of things, Phil Collins, Lionel Richie. And then of course Michael Jackson and Prince. Recently Cut Copy was a big influence of mine for a while. But I could really keep going on.

Do you find yourself listening to past or present music more?

It changes a lot. Last year I was listening to heaps of old stuff. Recently I’ve been listening to a lot of this band, I don’t know if you’ve heard of them, they’re called The War On Drugs?

Haha, yeah. You’re the second person I’ve interviewed this week to have mentioned them. They’re great.

Their latest album has been on constant repeat for me. I’ve really been into Future Islands’ latest album as well. Last year I loved the Haim record and the Chvrches’ record. It’s funny with Chvrches, and other bands that are contemporaries of ours, I find it difficult to listen to their albums and just listen to them without, kind of, comparing our stuff to theirs. Not in a weird way, but it’s hard to sort of just relax and absorb it.

St. Lucia are currently touring down the East coast of Australia with The Griswolds. 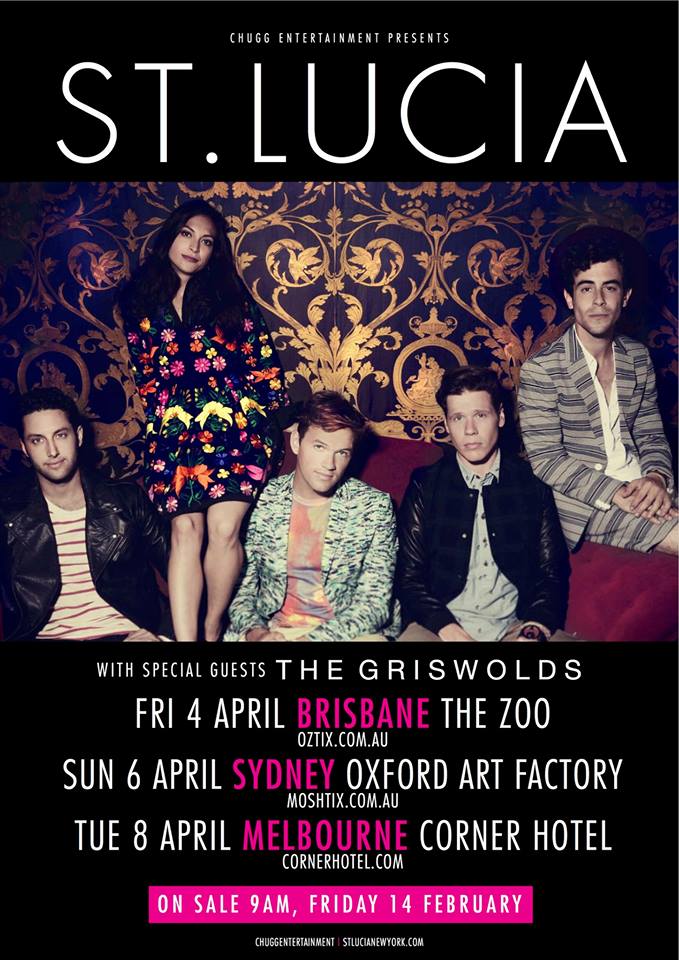