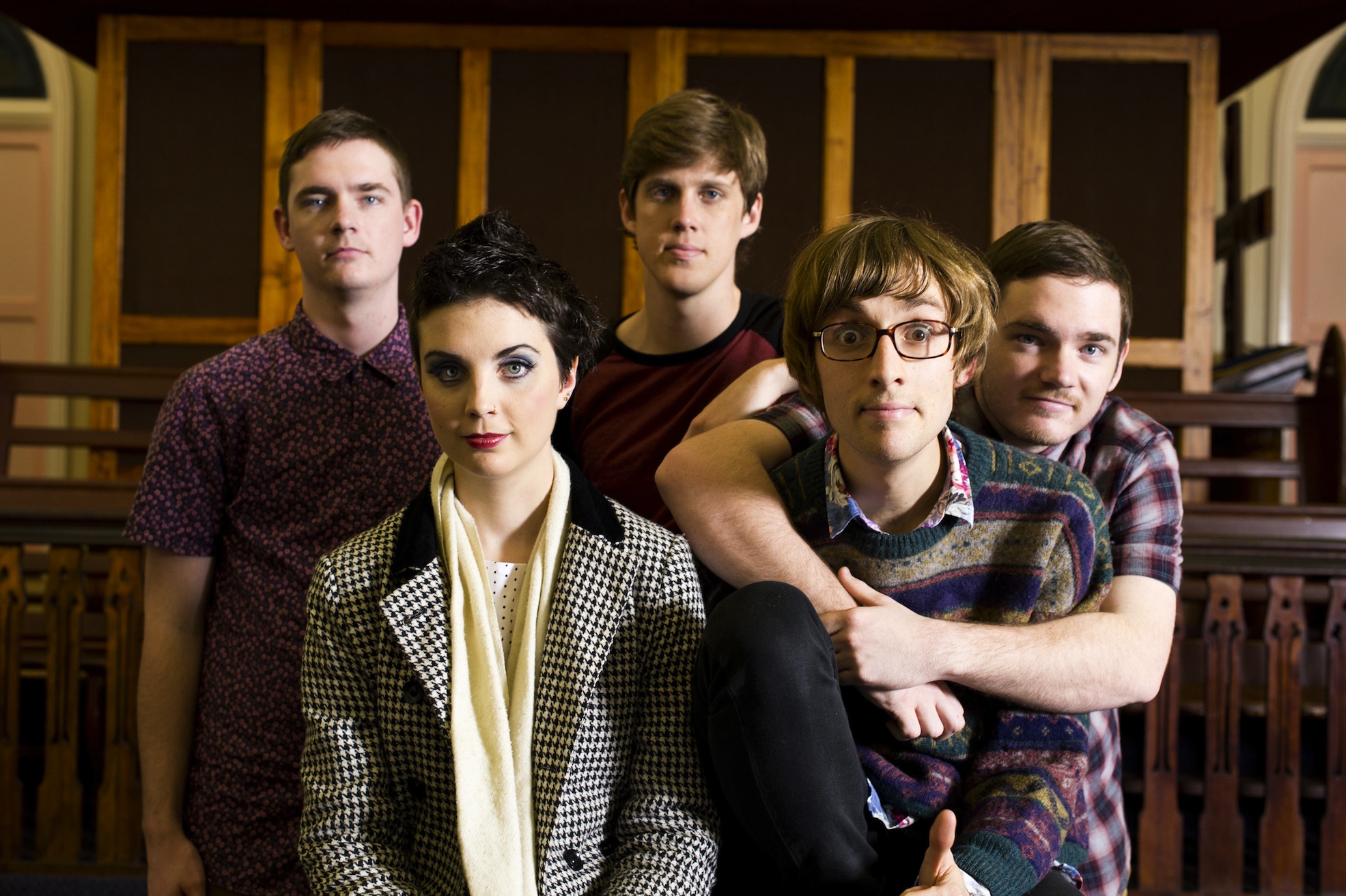 Last Saturday I was lucky enough to ﬁnd myself amongst the smell of pre-teen sweat and sticky ﬂoors at Ball Park Music’s Puddinghead 2014 Tour at the Metro theatre on George Street in Sydney. The ﬁve-piece indie/rock band ﬁrst met in 2008 at university where Ball Park Music was born.

A quaint little theatre, much smaller than I had ﬁrst expected, although big enough to carry the awesome sounds of Holy Holy, Papa vs. Pretty and Ball Park Music, and still have a personalised feel to it.

When I ﬁrst walked into the Metro I was greeted by the duo Holy Holy, whose rich vocals melted like honey. The laid back atmosphere of Holy Holy’s set was relaxing and the audience seemed to reciprocate with the crowd swaying to and fro, while going crazy at guitar solos.  Papa vs. Pretty had some technical issues while setting up their microphones, but never the less acted like pros and energised the audience with Tom’s quirky dance moves, their up tempo rock songs and real-to-life lyrics. Half way through their set Tom jumped up on the drum kit while singing, shocking the crowd with his brazen moves and nonchalant attitude to the whole situation.

Then the act everyone came for, Ball Park Music entered the stage, and without saying a word shrills and whistles from every corner of the room made it impossible to hear anything else.

Kicking off the show with “Struggle Street”, a song from their newly released album Puddinghead, the whole audience was singing along, hanging on every word that was sung, as if Sam was revealing life’s secrets.

‘Holy crap, you guys can make some fucking noise!’, Sam’s uncensored and raw nature is adored by the sweaty teens who were clawing for the band’s attention, although I couldn’t say the same for their guardians standing in the over 18’s section with their cold beers.

Singing hits like “Surrender” from their second album Museum, and “iFly” from their ﬁrst album Happiness and Surrounding Suburbs, which the band dedicated to Sam’s sister who is ‘here tonight and sober’, rather than their last failed attempt at dedicating a song to her, in which Sam describes her as being too drunk and being kicked out of the venue before they could dedicate it to her.

The sweet sound of honey that is Ball Park Music, who are just as good, if even better live. I was transﬁxed the whole night on both Sam’s quirky dance moves which were a concoction of both Michael Jackson/ John Travolta from Grease, and this mysterious gong hanging at the back of the stage behind the drum kit.

‘Thank you Sydney for being so so so so fucking fantastic!’

Singing a mix of 16 songs from each of their albums, and before ﬁnishing their set with “Coming Down” from Museum, and even though “Coming Down” was one of my favourite songs of mine, Ball Park Music still hadn’t used their gong and honestly it was starting to bug me.

After “Coming Down” they told everyone to ‘have a great night’ and left the stage.

Although those of us who frequent gigs know that they’re not over until the house lights go on.

They were still off.

The crowd was screaming ‘encore’ as expected, and slowly but surely after a couple of minutes, just enough time to let the audience sweat, Ball Park Music came back on stage with an announcement – ‘Did you see our gong?’, (thank goodness I thought, i’m not actually crazy!) ‘Did you think we would bring it all the way to fucking Sydney and not hit it?!’

They announced that they were to perform a cover song, they didn’t say what it was, Sam only said that ‘I’ll let you work it out’.

‘One, two, three, four, Is this the real life? Is this just fantasy? Caught in a landslide. No escape from reality…’ And I have to say that it is probably the best cover of Bohemian Rhapsody that I have ever heard in my entire life. You should seriously check it out:

Nearing the end of the song, which mind you is about 6 minutes long, Sam yells to the crowd ‘Sydney want to see this fucking gong hit?’ who in return obviously scream in delight at the ﬁnale to this tension I was feeling all night, just from the sight of this gong.

That in mind, Ball Park Music put on a, to quote Sam, ‘fucking’ fantastic show that displayed their vast array of mystical sounds, with Sam’s creamy vocals, smooth harmonies and eclectic instruments.

The energy and amazing music brought to the stage by Holy Holy, Papa vs. Pretty and Ball Park Music created a memorable night for all. Even those dad’s in the over 18’s section attached to their beers all night.