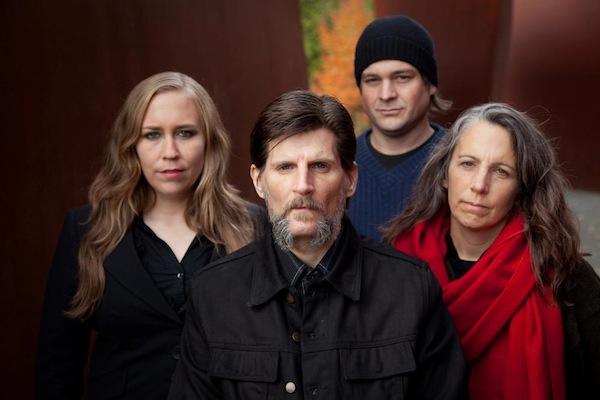 Seattle veterans and founders of drone/doom metal, Earth have been hugely influential in the metal subculture for a long time. They’re a little.. different to most of what I listen to these days, but it’s something I’ll always love. I was really, really excited to hear that Earth will be visiting Australia next month for the second time ever (their live shows have been described as a ‘religious awakening’) and jumped at the chance to interview frontman and founding member, Dylan Carlson.

46-year-old Carlson has led a difficult life, to put it mildly. But having moved on from a life of drug addiction, incarceration, and a notorious friendship with Kurt Cobain, he’s doing a lot better today. He’s touring the world (alongside wife/Earth drummer Adrienne Davies), recording new music and reflecting on past decades.

We had a chat about the forthcoming Earth record, The Grateful Dead, and whether or not he considers himself a rock star.

Hi Dylan. Whereabouts are you?

I’m in London right now, played last night. Playing in Amsterdam on Saturday and then I will be flying from London to Tokyo, and then to Australia and New Zealand

Last time you toured in Australia you’d been really ill for a while before hand. How are you feeling these days?

I’m doing quite well. The liver medication seems to agree with me, and there’s been some liver improvement which they hadn’t expected. You do get a little more tired after flying than I used to, but other than that I’m good.

That’s really good to hear! I also heard earlier this year that you were mixing some new tracks?

Yeah, we just finished the new record, just approved the CD master and now waiting for the vinyl. We were hoping to get it out in time for the tour, but the release date will be September 2nd. I’m hoping we’ll have some CDs at the shows, at least. We’ve got the reissued vinyl for Hex; [Or Printing in the Infernal Method] and The Bees [Made Honey in the Lion’s Skull] and then we’ll be playing most of the new album on the tour. One of the songs on the new album we actually wrote in Perth.

That’s cool. Does travel influence your music in some way?

Yeah, sometimes. Sometimes in sound check we’ll come up with something, and then have to remember it, haha.

What can we expect from the new album? You’ve said it’s going to be heavier.

It’s called Primitive and Deadly, and yeah it’s more of a return to the hard rock/heavy metal roots of the band. There’s three tracks with vocals, two of which have Mark Lanegan singing and one with Rabia Qazi from Rose Windows. I guess it’s harking back to the Pentastar [in the Style of Demons] era.

What influenced the decision to go heavier?

I don’t know, maybe it’s a mid-life crisis, haha. My usual thing is I sort of go back through music I’ve always liked and listened to. Lately for some reason I’ve been listening to a lot of stuff I grew up with like Scorpions, UFO, [Judas] Priest… maybe that has something to do with it.

When you’re writing and recording, is that something you primarily do for yourself, or for the listener?

Well, music is a weird thing to me. Ultimately you have to do it ‘cause you love it – especially the music we do. We’ve done quite well, but we’re not driving Rolls Royces or flying in private jets, so you have to be doing it because you love it, not to be huge or whatever. And music has always been weird to me, because at the end of the day it’s the audience who determine your finest moment. You can be really hyped about an album or a song or a show, but it’s the people and the crowd who determine that moment for you. It’s a lesson in not being a control freak.
It’s one thing I’ve always thought – I’m a big Grateful Dead fan, which I know is bad to a lot of people, haha. But I always liked their attitude, that the audience is a part of it. Everyone there is part of the experience, so no one’s bored or more important than anyone else. I always think it’s weird when you see bands who are kind of mean to their fans, like, if it wasn’t for them you’d probably be in food service or something, hahaha.

Especially with music Earth makes, it’s something the audience really has to take on and immerse themselves in.

Yeah, definitely. It’s always interesting when someone says “Oh, I felt this way about this song” and it’s the same thing that you thought about it, even though you’re not saying what it’s about, or what you’re supposed to feel. It’s cool.

In an interview a few years ago, you mentioned that when you started the band, like everyone else, you wanted to be a rock star.

In some ways, Earth kinda are. I mean, you’ve pioneered an entire genre and spawned so many bands under that. Do you feel like a rock star?

Some days you feel it, some you don’t, hahaha. [lots of laughter] Sometimes you feel like you could walk on water and sometimes you struggle to get out of the van.

But I’m really lucky. I got a chance, and after fucking it up I got another one. So I try to not be an ego-maniac about it. I’m just grateful.

You had a nine-year hiatus, but overall Earth has been around for 25 years. What are some of the biggest changes or differences in the music industry today?

Well, before, you did well on an indie [label] or you toured a lot, and then you signed to a major. And then the career arc unfolds. That just doesn’t seem to happen anymore. A lot of people are self-releasing now, there’s so many more ways to try and do your thing. In a lot of ways I think it’s good, I mean, I don’t think the majors really did a very good job. But it’s also a lot more difficult in a certain way, ‘cause you have to be a lot more on your game, especially with social media and stuff like that, it’s a big part of it now. Sometimes I feel that Earth is a bit of a dinosaur, we still record in studios, and now you can just record at home.

Haha, I’m trying to picture Earth being recorded in a bedroom studio…

Hahahaha, I don’t think we could quite get away with it. We shot ourselves in the foot, Earth fans expect a certain quality. We can’t really record on Garage Band…