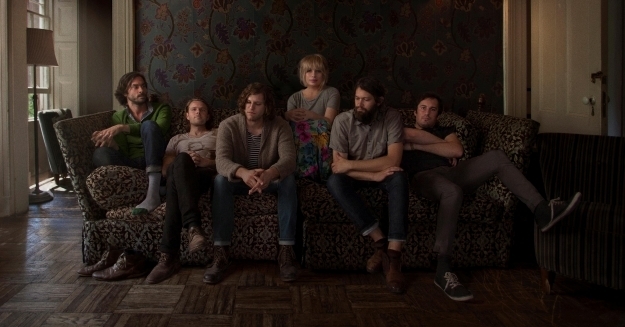 Interview: The Head and The Heart

Seattle indie-folk band The Head and the Heart have come a long way since meeting at an open mic night. Their songs have been featured on How I Met Your Mother and Silver Linings Playbook, and they’ve been selling out tours and playing to full festivals crowds throughout the world. We’ll be lucky enough to see them at Splendour in the Grass later this year.

We had a chat with Keyboardist Kenny about their tour, the story of how they came to exist, and they’re first Australian winter.

Hey Kenny, How are you?

I’m good thanks, how are you doing?

Good thanks. So how’s the tour going so far?

It’s been really good. We’ve only been out for a couple of weeks, then we have another week or so, but the show’s looking great. We have five weeks off after this trip, so we’re all kind of looking forward to the summer vacation.

It’s good, we’ve had a mix of festivals and stuff so it’s always nice to change it up a little bit.

Yeah definitely! Are you guys in Seattle at the moment?

No, we’re in Baltimore, Maryland. We’re out here on the east coast for most of the rest of this trip, we end in Tennessee next Friday, then we all fly home on Saturday.

It’ll be nice to have some down time.

Yeah, we’ve been pretty busy for most of the year so it’ll be our first real chunk of time to relax a little bit, which is always good. We’re pretty much done until we head down to you guys in July.

So I heard you guys all met at an open mic night in Seattle. How did you guys end up forming The Head and the Heart?

It’s really funny, a lot of people when they hear the story they don’t believe it because it sounds like a TV show or something [laughs]. I had moved from Los Angeles to Seattle looking for a change in scenery and I liked the city. John and Josiah, our two male singers, had also moved up six months prior and met at this open mic. I went to this bar to have a couple beers and watch a basketball game, and it happened to be the same night as the open mic. I saw them that night and was impressed by them. I introduced myself and the three of us started hanging out over the summer, and would play this open mic every week. Our bass player, Chris, was the bartender there and he would see us play every week. We knew him just from going to the bar and eventually he asked us if we needed somebody to play bass for us and we said yeah. We met Charity at the same bar through mutual friends who showed up at the open mic one night. We were just hanging out and drinking, and she started playing with us. Our drummer Tyler was the only one who somebody in the band knew outside of just meeting randomly – He was John’s buddy in high school. Once we recorded a couple of demos, we sent them out to him and he moved to Seattle to be our drummer. Besides him we all just met at this random bar under random circumstances. Eventually we started playing around town. Just the right place at the right time, I think.

Where does the name come from?

Josiah came up with it. I think it came from the idea of doing what you want to do rather than what you’re told, or expected to do. Which, for more than one of us, was how the band started out in the first place. I’d left my home in L.A behind to go and give music a shot and move to a different city, and he was at school and gave up school to do music full time. Two of the other guys moved across the country for the same idea. We all had the same thing going on in our lives separately, and then we happened to meet. Really it’s about the idea of following what you’re passionate about or what you really want to do with your life, and taking a chance with that rather than just living your boring, monotonous desk job life – which is what we probably all would’ve ended up doing if we hadn’t taken that chance.

I actually first heard of you guys because I love Pretty Little Liars, and Troian Bellasario was in your music video for Another Story. I watched it and fell in love with your music.

What was the concept behind that music video?

To be honest I did not have a whole lot to do with that personally. That was John’s – the one member who is in the video – he had this idea, he had met the director in L.A through mutual friends and he asked the rest of us if he could take the reigns for that video. It was during a really busy time so I think a lot of us were totally fine with that [laughs]. We were like, “yeah sure, you do the work.” So he worked with the director, and we kind of had a vacation while they filmed that, I wasn’t even there for it or anything. I have no idea how we got Troian to be in the video, maybe it was through mutual friends, but that’s all I can really say about it, I didn’t have the biggest part in that video [laughs].

Did you have a part in writing that particular song?

It’s always different depending on the song – the initial ideas for songs have come from each and every one of us at different times. That song was John’s originally – at least the lyrics and the basic structure of it, then he showed it to us and we tore it apart. There are definitely parts of that song, and every song, that have input and ideas from every member of the band. But that was definitely a John song and he felt very personal about it, which is why he wanted to take the lead with the video. It was like his baby.

What types of things inspire what you guys write songs about – subject wise?

We really write about what we’re going through. If you listen to the first record, a lot of the songs are about the struggle of leaving home or going somewhere new, taking a risk and trying something out you’re not comfortable with. I feel like the second record has a lot of songs about not being home and missing home. The whole idea of Let’s Be Still is let’s take a break and cool down for a bit, we were literally on the road touring for three years straight. We went from never having done that in our lives to being gone 10-11 months out of the year, always on the road. We definitely want to take a nice chunk of time off, early next year, to live normal lives, so we’re not just writing about being on the road all the time – ‘cos that can get super boring. But yeah, they’re really about what’s happening in our daily lives, there are not many ‘story’ type of songs, or ones based on fiction.

Are there ever songs that you guys have written that about certain people?

Definitely – relationships and people that you’re close to or that are going to inspire stuff. When you’re a musician and you’re a songwriter, you have to get emotions out in that form. I can’t throw out names, but there’s always going to be people who are close to your lives or people that you don’t like [laughs] or that are making your life harder, and they will inspire writing.

Do you ever feel that those people figure out a song is about them?

Most of the lyrics come from John and Josiah, so it’s more of a personal thing for them when it comes to the lyrics of our songs. The rest of us focus way more on the dynamic and the sound and the interpretation of the songs, and trying to get those emotions across. They could talk about the meanings of each song for days, and that’s their part of it and they’re good at it. I trust them with that [laughs], but my role is very much more the music side of it.

So personally, what inspires you musically?

That’s such a hard question, everything really. You know, life and travel, everything. It’s something I think about all the time. Every daily occurrence in my life is going to inspire whether I want to play music or not, or whether it’s going to sound like I’m pissed off [laughs] or I’m really happy. It just comes out all the time. It’s the worst when you feel like you need to be proactive and be writing more, but you’re in a funk and just can’t do it. It always comes out when least expected, when you’re having a totally normal day and randomly write something that sticks. It’s when you try to force it that it never happens.

So you guys are playing over here at Splendour in the Grass at the end of July, is this the first time you’ll be playing in Australia?

This will be our second time, it’s been almost two years since we were out there for some of your summer festivals. In January, for Falls Festival, we did some shows for a couple of weeks. That was the only time, so it’ll be our first Australian winter. That’s something I’m really curious about, I hear it’s not too bad.

Yeah it’s not too bad, definitely not as cold as Seattle would be, so you should be fine.

Yeah I’m really excited, we love it out there! We had the best time ever when we went on that first trip, it was a break from winter. It’s was so cold in Seattle, and we got to leave that behind for a couple of weeks and hang out on beaches.

How’s the festival circuit different to headlining your own tour?

I really like it. I feel in Australia you have these festival circuits where you do like one after the other, almost like a festival tour. What we’re doing right now is we’re headlining shows and once or twice a week we’re at a festival. I kind of love that because it switches it up a bit. When there’s more variety you don’t get as bored doing the same thing every day, and you get a chance to see other bands and artists, which is always really nice on the road. They both have their upsides and downsides – obviously when you’re headlining you have move time to sound check and make sure the show’s perfect. Festivals can be kind of stressful – you just get up there and hope that it sounds alright. That spontaneity also kind of makes it really great, and we look forward to playing festivals a lot.

You can catch The Head and The Heart at Splendour in the Grass in Byron Bay on July 25th.
Splendour will be releasing an additional ticket release of 2,500 tickets at 9am on Thursday 12 June via moshtix.com.au.