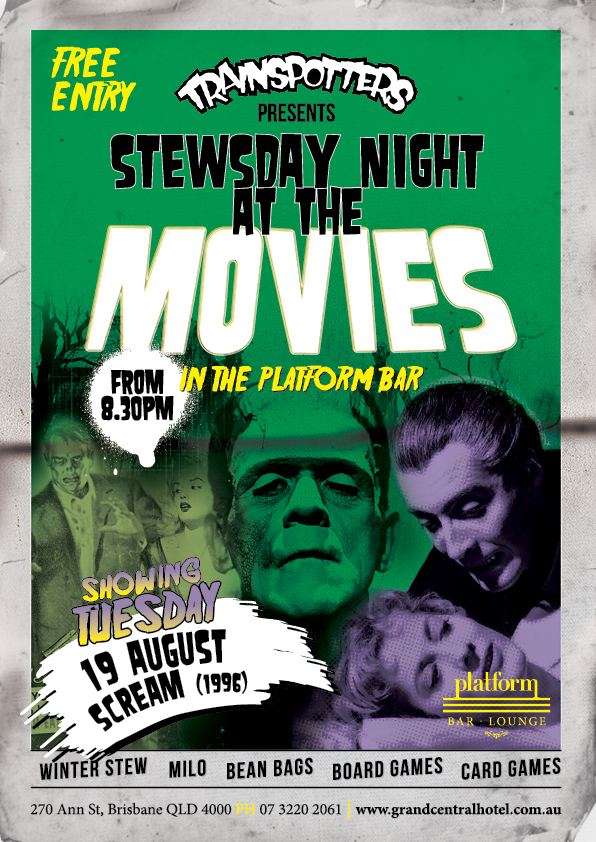 Tuesday nights can be a bit dull, especially for Brisbane. Too close from the weekend just gone, too far from the weekend to come, and most places are actually closed. Not anymore! The cool dudes behind Saturday night staple Trainspotters are here to save the (Tues)day, one cheesy horror movie at a time!

Stewsday Night at the Movies has you sorted, with the second ever event happening on August 19. Complete with winter stew, hot milo, bean bags, blankets, comfy couches, board games and card games, this round will be showing Scream (1996) and, if Trainspotters is anything to go by, will be cementing itself on Brisbane Social Calendar in no time. For those under the proverbial rock in which they surely must live if they’re still unaware, Trainspotters is a weekly gig which is held at the Grand Central Hotel, and is a guaranteed good night out, with cheap drinks, good music, fairy bread and free entry! The success of Trainspotters speaks for itself, with a monthly Thursday night gig, Off The Rails happening as well. It’ll only be a matter of time before I spend every night of the week there! We asked a few questions to get you more in the know.

Trainspotters started as a weekly Saturday night gig but since then we’ve added monthly Thursday night shows, monthly movie nights, started a (shitty) blog and are currently helping to book Blurst of Times festival to be held in Oct.

Where did the idea for Stewsday Night at the Movies come from?

Is it on every Tuesday?

Nah, just the 2nd last Tuesday of each month at the moment. Maybe we’ll do it more frequently if people seem to enjoy it.

Is there a theme or trend in the films being shown?

Yeah, mostly cheesy horror movies at the moment. However we have had requests for sci-fi films so we might go down that alley eventually.

Which other films will be shown in the coming weeks?

Well, we’ve got Scream next month and it has multiple sequels so they could be the logical next step but to be honest it could go any direction. I also really like zombie movies.

The Big Lebowski… It doesn’t really fit with the current horror movie theme but it could definitely make a showing.

Which board games will be there?

I’ve been trying to find Mouse Trap but it’s proving difficult. At the moment we’ve got Cluedo, Jenga, Monopoly, Uno…that kind of stuff.

How much milo is the perfect amount of milo?

At least four tablespoons…. Anything less than that and you’re just wasting everybody’s time.