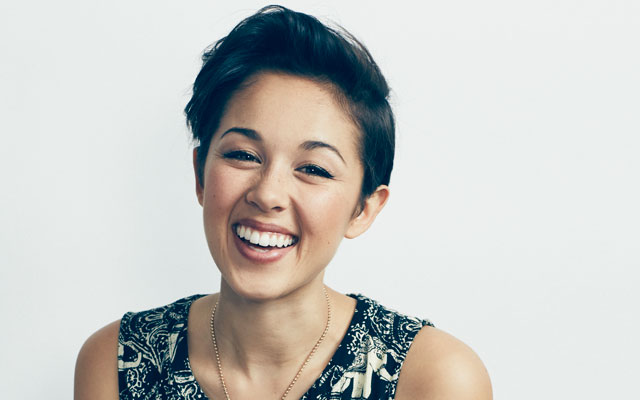 Californian singer/songwriter Kina Grannis warmed the hearts of the hundreds of chilly fans on Sunday night at her show at The Tivoli, Brisbane. Grannis, along with her band, treated the crowd to a wonderful fifteen-song set as part of her Elements tour, supporting her newest album of the same name.

First to take the stage for the night was Sydney based musician Patrick James. Over forty minutes, James alternated between his acoustic guitar and piano, playing songs off his most recent EP Broken Lines and winning the hearts of audience members with his beautiful voice, heartfelt lyrics, good (okay, great) looks and ability to be an A-grade wingman for his manager (who is still single, by the way).

Shortly after, all bar the stage lights dimmed as Kina Grannis took to the stage with her album’s debut single, Dear River. Grannis went on to perform her second single from the album, The Fire, before ‘giving love to Stairwells’ with Cambridge. As Kina’s voice filled the Tivoli, you could’ve heard a pin drop in the audience.

Kina doesn’t just give the crowd her music, she gives the crowd her stories; often pausing before songs to explain where the idea came from – no matter how short or long the story may be. A particularly touching story is that of Forever Blue which, with teary eyes, she told the (also teary eyed) crowd she’d written last year following the death of her grandfather.

The Elements tour is the first time that Kina has had a full band behind her, which came in handy when it was time to snap a picture of the crowd. Rather than just having the crowd smile and wave in silence, the band played a Doobie Brothers tune while the photo was taken because, well, why not? After a chat about the internet and a sincere thank you was said, Grannis played her internet hit Valentine, before bringing her husband (and backing guitarist) out to play an absolutely beautiful song of his called I Knew This Would Be Love.

Keeping with the theme of acoustic internet hits, Kina simply said ‘jelly bean’ before playing In Your Arms, a track which went viral with a video clip that contained more than 288,000 jelly beans, and almost forty times as many views.

Grannis finished the night with an encore featuring an unplugged version of Message From Your Heart and (appropriately titled) The One You Say Goodnight To before meeting the entire audience in a post show meet and greet.

As a long-time fan of Kina Grannis, I knew I’d be getting a beautiful show; but what the audience received was far more than that. We were able to see Kina on stage in her element (see what I did there), a musician so in love with where she is. Her incredible voice did not fault and, despite a few false starts and awkward pauses, the show ran wonderfully. With a voice like hers, there is no need for elaborate sets and costumes to make the show… She does it all on her own.