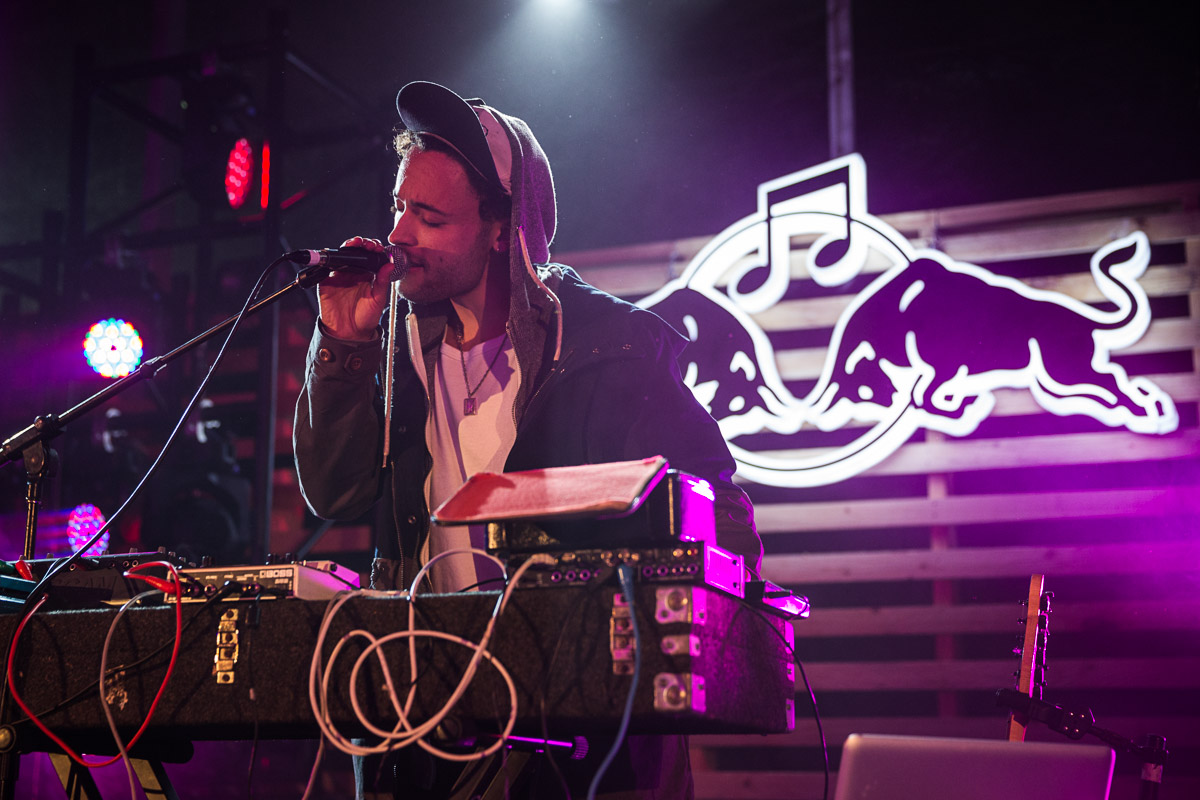 Melbourne singer-songwriter-producer-multi-instrumentalist Oscar Key Sung first came to attention as one half of Oscar and Martin, before branching out on his own. I chatted with Oscar a few months ago around the launch of his latest EP Vessels., and hhad the chance to catch up with him again at the Red Bull Music Academy stage at Splendour in the Grass 2014, where we spoke about his year so far, his personal ambitions and the importance of truth and beauty in music.

So how are you finding Splendour?

Great, I’ve been here the whole time but I’ve been staying in Kingscliff, so I’ve been hitting the beach, going for beach runs, it’s been pretty good.

Who else have you seen so far?

I’ve seen a lot of friends like Black Vanilla – they were amazing. Hiatus kaiyote, Kelis, Outkast, that was cool.

How did you get involved with Red Bull Music Academy?

Through Jamie Bennett and one of my good friends who works for them. I think they just think that what I do suits their vibe, so they reached out.

Last time we spoke you were saying that you wanted to work with some more rappers and singers – how has that been going?

Yeah, I’ve been working with a couple singers and I’ve reached out to a couple rappers. I haven’t successfully worked with any new rappers yet, but it’s something I’m gonna do eventually. Just gotta find the right project.

What else have you been up to in the last few months?

I did some touring overseas in Japan, London and New York, it was cool. Playing in Paris was a big highlight. The crowd were so good, so responsive, I think they really liked it.

Has your recent travels influenced any new writing or work?

Probably nothing too direct, but I wrote quite a bit when I was there, so I’m sure there’s some influence.

Last time we spoke, we were also talking about books and some of your favourite writers – what have you been reading lately?

Last book I read was called ‘Dancing Girls’ by Margaret Atwood, and I’ve just read David Byrne’s book ‘How Music Works.’ I also read a really cheesy book called ‘The Alchemist,’ but I really enjoyed it! I read it on a morning when I was really hungover, it was like watching nice action movie.

Well I’m releasing a new single in August, and I just wanna record a lot and finish the record, but it’s a bit slow sometimes. I’ve got a tour with Andy [Andras Fox] and a lot of other stuff that’s up in the air. But I’m definitely gonna record a lot.

Will the record feature anything really surprising or new, or is it more a continuation of the style you’ve been creating already?

So do you have confidence in the music you currently make?

During the writing process I tend to get quite insecure and freak out a bit. One night I’ll be like, “oh my god, this is the best thing of all time! What have I done?” And other times I’ll be like, “this is so stupid and shit, why did I think this was good yesterday?” and it’ll go back and forth.

Do you think you’ve got a good instinct about your tracks?

I think I know when something’s finished. With songwriting, you’ve really got to come to terms with what you believe and who you are, because you’re making a statement. Your lyrics and words are adding to the mass of sound garbage out there – there’s so much sonic landfill. You’ve gotta express something and you’ve gotta take responsibility for it. You can’t say something that isn’t true, or that you don’t believe in, because then you’re a liar. And if you’re a liar… you’re a dick!

What are you trying to express in that sense?

I’m trying to say a number of things at once. Some of the stuff I’m talking about are things that have happened to me, emotional ideas I’ve had, but I never want a song to always mean one thing. I want it to mean a few things at once.

And do you want people who are listening to it to interpret it in their own ways?

So there’s truth in everything you do?

So when you’re listening to other music…

…You can feel when something’s fake. I can tell straight away.

Does that ruin it for you?

What’s an example of something that really speaks to you in that way?

Stuff that’s really authentic is always really special, not the most popular or the most exposed. Because with those tracks, someone is doing it because they want to, not because they have to. A lot of the stuff I really like in that sense is sad folk stuff – Vincent Gallo, Moses Sumney, I love his stuff. Arthur Russell too, stuff like that is the best to listen to. You’re in somebody’s own special world and you trust them and believe in them.

Do you feel like you’re peeking into someone else’s life or that you’re being invited in?

Different music has different contexts and makes you feel different ways. Sometimes I feel that way, like that new guy, Spooky Black. Some of the lines in his stuff, I’m like, “oh I shouldn’t have heard that, it’s full on.”

Do you listen to music that doesn’t reflect in truth, beauty or any deeper level?

I love a lot of highly sexual music that doesn’t mean anything other than to dance or be sensual. Dance music is more visceral, more physical, more of an aesthetic. But it’s still about atmosphere. There’s still types of authenticity that you can find in dance music too.

So when you say you want to better your music, it’s that openness and authenticity that you’re looking for?

Yeah. To put more into it, say something that’s more interesting and to have it sound fresh. Try and better myself, to just do better than the other stuff I’ve done.