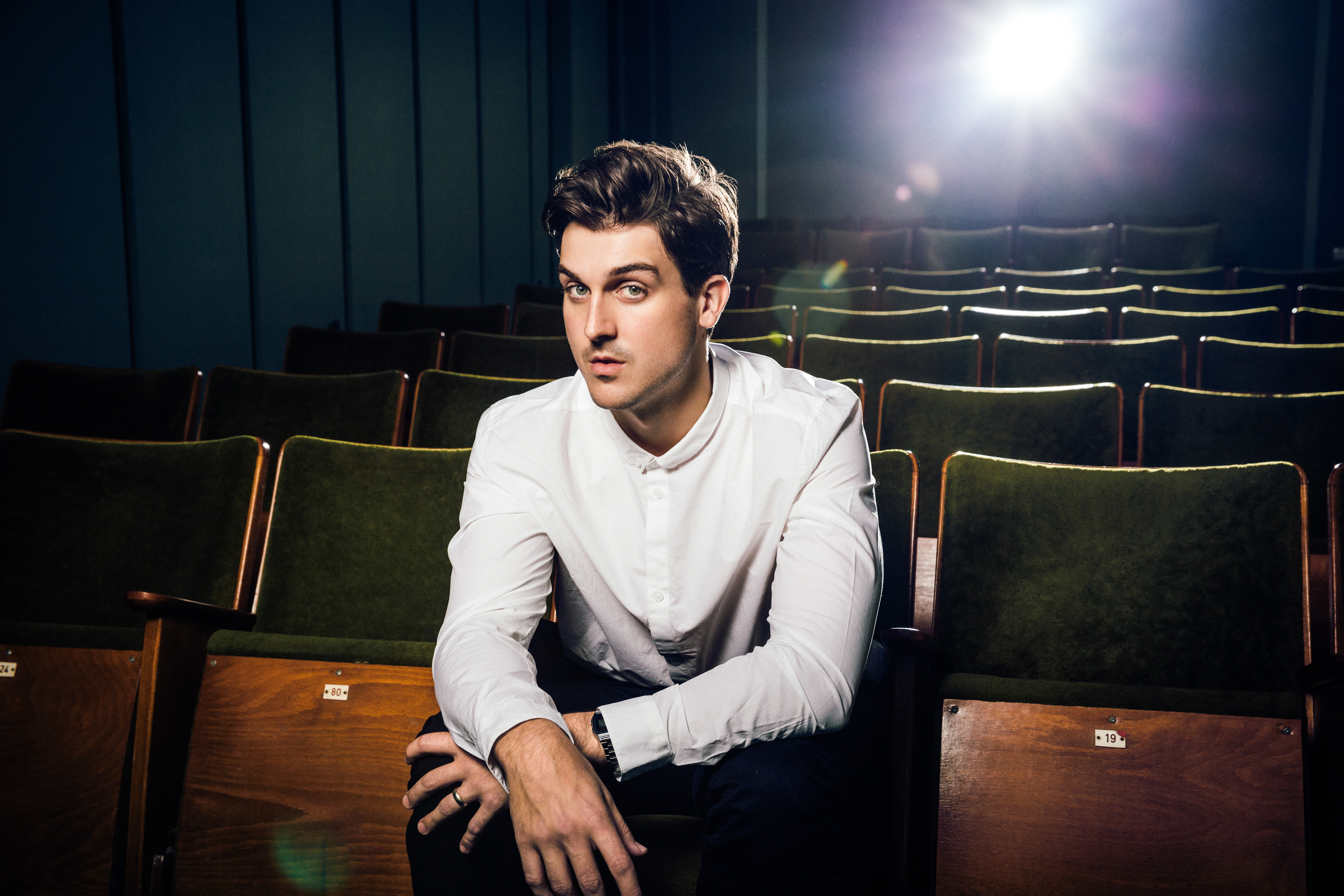 I’ll admit it – I’m a little biased when it comes to Andy Bull. I’ve loved him since his song Dog, with Lisa Mitchell, graced my unsuspecting ears in 2009. I didn’t think it was possible for this love to get any stronger, but yet, with each release it grows. Andy’s second album, Sea of Approval is no exception. After five years, he is back and better then ever! Older and wiser, Bull’s album is infectious, with already-hits Keep On Running, Baby I Am Nobody Now and more recently Talk Too Much (featuring Megan Washington), paving the way for what has become probably one of the best Aussie releases this year.We caught up with him for a chat ahead of his national tour to get a bit of insight into one of the best up-and-coming acts of 2014.

Can you tell me a bit about the name of the album Sea of Approval? Does that tie into any central themes of the record?

I meant the title in an ironic sense. I think a lot of pain comes from seeking acceptance, or approval, externally.  This sea of approval, it’s an illusion; at best a carrot being dangled always out of reach, at worst the Sword of Damocles.

As Sea of Approval is your second LP, did you find any of the typical second album pressure a lot of people find?

No, no typical album pressure. As I understand it, typical second album pressure applies when the first album has been both recent and very successful, neither of which particularly applied in my case. There was nothing to “measure up to” as it were, at least not in my mind. It was a pretty fresh start, no way to go but up. A lot of work went into it, but for its own sake.

It took you a few years to complete Sea Of Approval, were you working on it consistently in those years, or did you come back to it in intervals?

It took me only 12 months to complete Sea of Approval. Some ideas that made the record were brewing before that, but only in the form of a phrase here, a chord idea there. Once I sat down to do this album, it took about 12 months, on and off. Although it has been a few years since releasing music, that time in the interim was spent working on other things. Some ideas are best worked on in intervals, best not to force things when they want to take time. Gentle nudging! Sometimes you know you have a good start on something, but a good finish seems a little more elusive, waiting until the right moment, and you cant predict what that moment will be. You just have to show up and be patient. The epiphanies seem to sit the laps of the gods, dispensed at their discretion. I could have kept on working on SOA longer, but I got a very strong sense towards what would be the end that it was time to finish it and move on, whatever the outcome.

How have you found the record being received? Has it been positive for you?

It seems like the response has been quite positive. There is, of course, a mix of responses, but I think I’ve been happy with all of it. Mostly people have been very generous in their assessments, but even those appraisals that are less favourable have sort of satisfied me, in a funny way, because the things that those people haven’t enjoyed were at least done intentionally, and are things I am myself pleased with. It makes me feel as if I have managed to be articulate.

Just different sounds, and different approach to recording; writing and producing at the same time, using synthesizers and just trying to exploit the technology available. The biggest change was doing it all alone. But these are all differences in relation to the last EP, which was finished four years ago, and seems pretty distant to me now. These ‘big’ changes happened gradually in the time between. I think my overall aim was different, and has changed as a result of time and experience.

Your collaborations are pretty impressive, but with this record you’ve taken a step away from that – has your creative process changed much because of this?

Yes. Working alone changes things a lot if you’ve always worked with others. Working on your own time is liberating in a lot of ways and challenging in a lot of ways too. I think the biggest change is just that in my solitude, I felt free to try things and reflect on things without an undue fear of judgment. There was the space to investigate and experiment, space to fail, to adjust, to take my own time, or rather to let the ideas take their time. I think all these things are good for you sense of autonomy, and your capacity for creativity. I wouldn’t go as far to say that aloneness is always the right approach, but in this instance it gave me what I needed. It was something I really wanted to do.

The album is a bit of a story, isn’t it? Can you tell me a bit behind what’s going on?

I think, from time to time, I thought of it as if it were the soundtrack to a film. That’s at least partly how I was thinking about it when I was making it, and when I hit a sticking point, it helped guide some of the decisions about what to do, what to include.  I did a video for the song Baby I Am Nobody Now, and in it I played this character, who I thought of as ‘Nobody’ or as ‘The Actor’ and from time to time the songs throughout the album became thought of as the accompaniment to what I imagined his life might be.

On the topic, I think people often reflect on their lives in narrative, symbolic terms. Its how we learn and remember, interpret and predict. If it weren’t that way, we probably wouldn’t have any need for songs, stories, films, novels, even religion; there’d be no reason for it. I think it can be problematic, for sure, particularly if you fall into the trap of thinking that you are the main character of the whole universe (which is crazy, dangerous and solipsistic) but the fact that we interpret life in narrative, symbolic terms is also at the core of why anybody is driven to create anything that might be considered ‘art’.

You were lucid dreaming whilst making this record – was that an influence on a lot of your work, or did you hone it in for a few particular songs?

I’ve always been a pretty vivid dreamer, ever since I was a kid, and often I have the kind of dream wherein I know I’m dreaming. It’s pretty surreal, very enjoyable, I wish it happened more. I think that dreams are interesting because they connect so many things that are in your mind in strange, novel, and sometimes disturbing ways. Conscious creative ideas seem to be similar in that they come from this place where thoughts connect laterally, but it happens while you are awake. You peek behind the curtain. You only get to peek, because anything more than a peak might be madness. But a glimpse is enough: enough to spark a song, a film, whatever. Private dreams, amazing as they are, aren’t useful to the world because after all they cannot be shared. Songs on the other hand can be. Making this record was like taking a little peek behind the curtain, and then doing a lot of hard work in the waking world. Dreams and inspiration are a part of the process, but certainly not the whole thing.

Who/what else were some of the other influences for this record?

I tried not to listen too much to other stuff that is currently happening, not because there isn’t amazing stuff currently happening, but only because I didn’t want to be inadvertently influenced by trends. There is sometimes a threat that by keeping too abreast of what’s hot, you will inadvertently end up second-guessing your audience, trying to do what you think they will like depending on what is momentarily popular, which is understandable, but is a very unhappy road to go down. If there were influences, they tended to be older personal favourites with private significance. Speaking of which, I was pretty happy when Todd Rundgren remixed Baby I Am Nobody Now, because some of his records, like A Wizard, A True Star, were favourites of mine growing up.

Can you tell me a bit about the clip for Talk Too Much? It’s actually one of my favourites I’ve seen in a while!

The clip was directed by Nelson Alves who also directed Baby I Am Nobody Now and Keep On Running. It was put together very quickly. Our aim was to do something that fit visually with the other two clips. The brief was to, in a very stylistic way and with a benzodiazepine pace, show three characters (played by me, TV presenter John Mangos, and Megan Washington) in both private terror and public show. So you’ve got shots of all three of us alone looking bleak in our ‘homes’, cut against shots of us smiling, waving, performing, as if on a TV show. John and Megan were both really great; the clip really rests on their faces.

When you recorded at your parents place to finish the record, how did that affect your work as opposed to the rest of the recording process? Was it an intentional, “Yep, I’m going to shake things up”, strategic move?

Nope. I was just that I was out of time, and I had nowhere left to go. I had planned to be finished by that stage and I was not. I just needed to go somewhere far away, without distractions. If not defeat, it was a kind of submission. Going back to the neighbourhood where I grew up felt kind of Odyssean, kind of final. I tried to think of it like Jung’s Hero! Fittingly, it gave me what I needed to finish the last song, which is So That I Can Feel Better.

With so much going on in the songs, with such intricate instrumentation, how will you adapt this for a live show?

We don’t try to recreate the recorded versions; we just reimagine them. In a way its really good, because the limitations of having only two hands each mean that you pick out what feels like the most important parts, and then roll with it. It becomes maybe more about the performance, and less about the particulars. There is a spontaneity in the live arrangements that’s really refreshing.

What can audiences expect from your upcoming tour?

A live band with live instruments and a lot of spirit.

Any plans post tour? Straight back into album three, or are you taking some (probably well needed) rest?