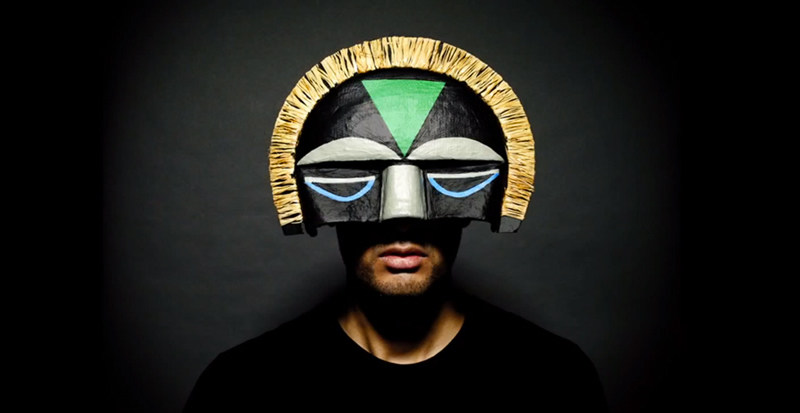 You press play, starting at Day 1 – we’re at the beginning of something, this is Eden, genesis. A slow birth of synth sound crests and falls over you, like the grand organ fanfare that greets pilgrims and dignitaries when you step into a cathedral. We are in the church of SBTRKT, and he will make a believer of you.

This is an album of spectacular scope, fifteen tracks spanning different genres, sound and style. Soulful, spacey, bold, minimal – “Wonder Where We Land” delivers across the board in an album to be marveled at. A showcase for the power of collaborative projects, Aaron Jerome aka SBTRKT has an army of talent behind him, bolstering his sound and in turn bringing out the best in his vocalists. Frequent collaborator Sampha is back on board, adding delicious depth to four tracks, as well as Chairlift’s Caroline Polachek, quick lick rapper Raury, Vampire Weekend’s Ezra Koenig, Jessie Ware and more. The result is a uniquely detailed album, as much about the performance and ideas as the sound.

Maybe it’s when you first hear that bass guitar in NEW DORP, NEW YORK, or when you are sucked into the interactive Look Away video online, or when Sampha’s velvety voice reaches its first falsetto, but at some point listening to this album, it happens. Something clicks. You stop drifting through each track and begin to register the levels Aaron Jerome has gone to to create something that seems so effortless. SBTRKT has used layer upon layer of clean, simple lines to create a thick sound, that while precise and detailed is still reduced to the bare essentials. “Wonder Where We Land” is worth listening to again and again and again and again – you will only love it more as you notice new details, a fresh surprise, and miniscule complexities that make all the difference.

NEW DORP, NEW YORK, the first and wildly popular single from the album, is creative genius, pure and simple, fearless and forward. Every time I hear it I imagine Ezra performing in black turtleneck and beret, a beatnik performance artist of true bohemian New York calibre. The combination of Ezra Koenig’s throw-it-around vocal style and the knock and bones clattery percussion are engaging enough. Then there is the distorted villain-on-the-phone spoken word element, the sudden walls of sound that attack without warning. I mean, come on.

Each track of SBTRKT’s second studio album is so distinctive it is impossible to describe the sound of the album as a whole. The title track features Sampha in futuristic soul, with soft spacey beats complemented with jazzy piano. This is followed by Lantern, SBTRKT in solo mode showing off in his fast tempo, glittery, buzzing instrumentals. Raury takes the lead in Higher with his raw hip hop talent offset with cool, driving basslines. Raury’s lick-sharp rhymes and hi-hat beat are a fresh turn for the album, the slow down flurried finish then returning us to Day 5 with ringing bells invoking triumph and doom. SBTRKT reminds us he can do whatever the hell he wants with us, then catapults us into the off-putting, uncertain and downright eerie Look Away. The mysterious video available here online for this track is the summation of its haunting beauty – an electronic mistress fades in and out of glitch computer darkness, startling white eyes almost but never quite meeting yours. Caroline Polachek’s voice is at once hard and heartbreaking, reaching breathy heights as she taunts us “She was never yours for the having.” You won’t know what to make of it, and then you will.

As well as bringing the ultra-cool experimental vibe, there are fifty types of sexy on “Wonder Where We Land”. All of Sampha’s tracks are gorgeous – his husky lovers whisper and croon does things to you, even on the less-soul-more-pop tracks, like the jumpy funk hip-wiggler Gon Stay. Jessie Ware also brings the bedroom to her track Problem Solved, her smooth, low RnB voice combining in perfect SBTRKT style with a beat that can only be described as ‘grind-ey’.

By the time the album winds down on Voices in my Head with A$AP FERG, Aaron Jerome has melted all of his slow jams, driving beats and gift for contrast together. “Wonder Where We Land” is, in a word, glorious. Keep listening, dip a toe in first before you submerge yourself in this singular soundscape. With so much talent crammed onto fifteen tracks, I am a cooler person for listening to this album.

“Wonder Where We Land” is out September 26.
SBTRKT is touring in December-January as part of Falls and Southbound Festival with sideshows in Sydney and Melbourne.