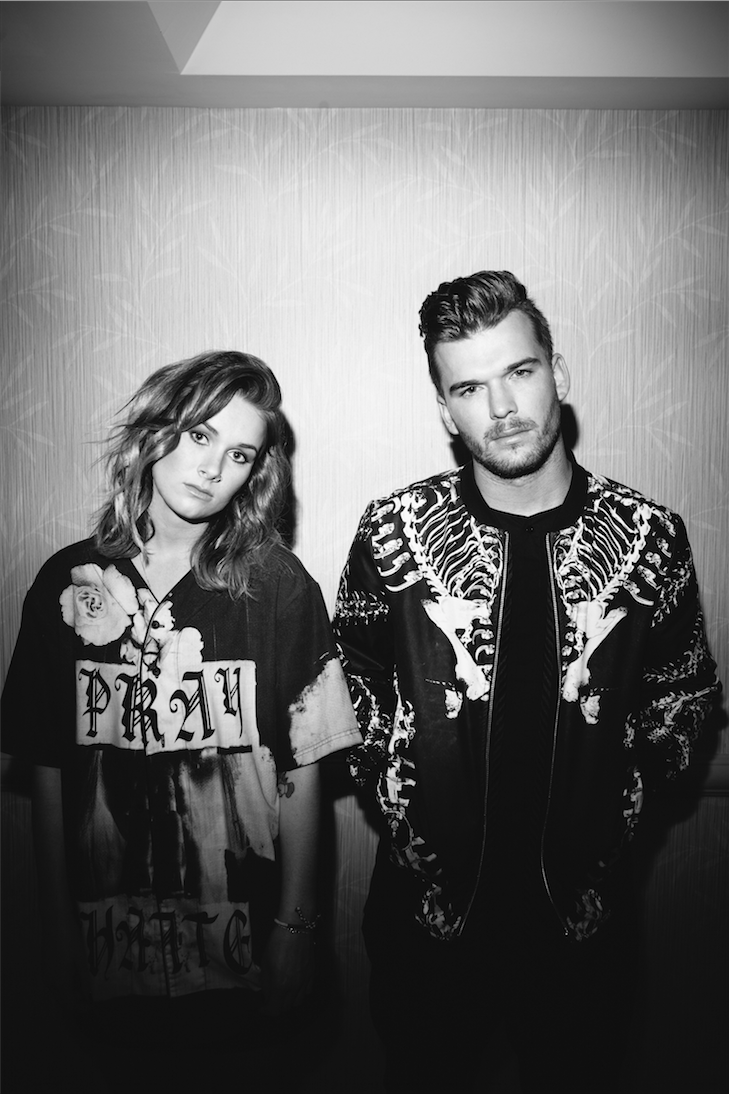 Whilst boarding a flight to Vancouver, Caleb Nott – of the Kiwi band Broods – had a chat to us about all things Broods, music and Starbucks. Broods, compiling of Nott and his sister Georgia, has been seeing nothing but stars this past year after releasing their EP, followed by their debut album, Evergreen.

So first of all, congratulations on all the incredible success BROODS has been seeing these past few months. The new album is insane!

How does it feel to have an album you’ve worked so hard on, receive such a great public reception?

I don’t know… It’s our first album. We’re just stoked having an album out, let alone people liking it and loving it. It’s just crazy! We try not to think about it too much.

Being a writer myself, I’m always curious when it comes to other musicians; what was the writing process like for you?

It’s different every time. Like sometimes, one of us will come with a demo, or something we’ve been working on solo and build it up in the studio from there. There are songs on the record that were actually built from scratch in the studio; so we wrote the songs in the studio and recorded them as we went.

Do you have a favorite song from the album?

Mine is probably Sober. It’s a soft, dark track. I just like the way that it makes you move. It’s kind of like, a soft kind of rave, if that makes any sense. Like an underwater rave.

I’m curious; how did the name ‘Broods’ come about?

I guess you get a ‘brood’ of ducks or something like that. Our music is kind of moody and highly emotional, so I guess it has that connection as well. We just needed a name really quickly.

I read that your parents are also musicians? What do they play?

Did you guys have really cute jam sessions as a family?

Not really with our intimate family. Usually our jam sessions are with our cousins; all of our cousins are musical as well. There’s always someone that plays something.

Well hey, given ‘Broods’ symbolises ‘family’, are they going to be joining you onstage anytime soon?

Well, I have two younger sisters that are still at school.. So I probably can’t rip them out of school to be in a band. One of them is eighteen; she’s got her own project she’s doing rather well with, so I think she’ll just play her own stuff. She did record some vocals for the record. She’s featured on the song Medicine with Georgia.

Are all three of your other siblings involved with music?

One of them is thirteen, so she doesn’t really know what she’s up to, like any thirteen year old. Our older brother is an engineer in the air force, so apparently he got all the brains and we got the creative gene.

Did you and Georgia just click together as musicians?

We played in a lot of bands and groups and stuff growing up in high school, and played with a few different groups together… But it wasn’t until last year that we decided to do something together.

Yeah! It wasn’t a bad decision.

So you guys became Broods in early 2013, and within a year you’ve signed with Capitol Records, made a U.S debut, released an EP and full-length album, toured with some incredible artists, as well as headlining your own shows, and are now gearing up for your Evergreen tour… do you guys ever sleep?!

Every now and then, maybe? We’ve worked really hard, but it’s not hard work. Well, it’s hard work, but with what we’re doing, it’s just so easy to do it, I guess.

Chugging down coffee, I assume?

With all your time in the US, have you become accustomed to Starbucks yet?

No… I will never be accustomed to Starbucks. I’m a coffee snob; I’m from New Zealand. I’ve kind of figured out how to order a flat white in America though. Well, I’m trying to. I just ask for a triple shot latte with half the amount of milk, and it works.

Coffee aside, how have you guys been coping with such a quick rise in fame?

I didn’t realise we were, it’s insane. I don’t think we are at the moment. I think everyone has different level of when they think they’re famous. We don’t get recognized on the street wherever we go or anything like that, so I don’t know if we have quite experienced it yet. But what we have experienced; we’re enjoying it. It’s quite exhausting sometimes, but it’s also fun.

Being from New Zealand with an international career, do you ever get the ‘omg, are you friends with Lorde?’ question?

Oh yeah yeah, all the time. Because we have the same producer as well, obviously there’s going to be that tie. She played a massive part in our rise in success as well, ‘cause all of a sudden there’re all these eyes on New Zealand music.

So are you friends with Lorde?

Oh yeah! We hang out if we’re in the same city and stuff. I’m friends with her band.

So as you said, Joel Little, who produced your album, also produced Lorde’s album Pure Heroine… so obviously he knows his shit. What’s it like working with him?

It’s been good. It’s been a learning experience. I’ve learnt a lot from him, and now I’ve started doing my own production stuff. He’s been a huge mentor to me with both song writing and just general life. He’s got a lovely family.

You’re about to hit the road for your Evergreen tour; playing venues around Australia this November. You’ve also just added a second all ages Sydney show due to such a high demand! Excited to be out on the road again?

I think we will be! We have a two-week break before that happens, so we’re eagerly awaiting for that. It’ll be good to get back. Touring Australia is just like being at home anyway, the culture and vibe at least.

What are you looking forward to most about this tour?

I think just being able to play Australia our whole album live! I think as we get along and we start touring more and more, we can start thinking of how we can improve the show. We haven’t really had that opportunity yet, so hopefully we can do something new… If we get time.

What can the fans expect from this tour?

I don’t even know yet, I haven’t actually thought about it! I’m in discussions at the moment about how we can make it more ‘wow’…. so you’ll have to wait and see!

THE METRO, SYDNEY (ALL AGES)

Tickets are available at http://www.ticketmaster.com.au/