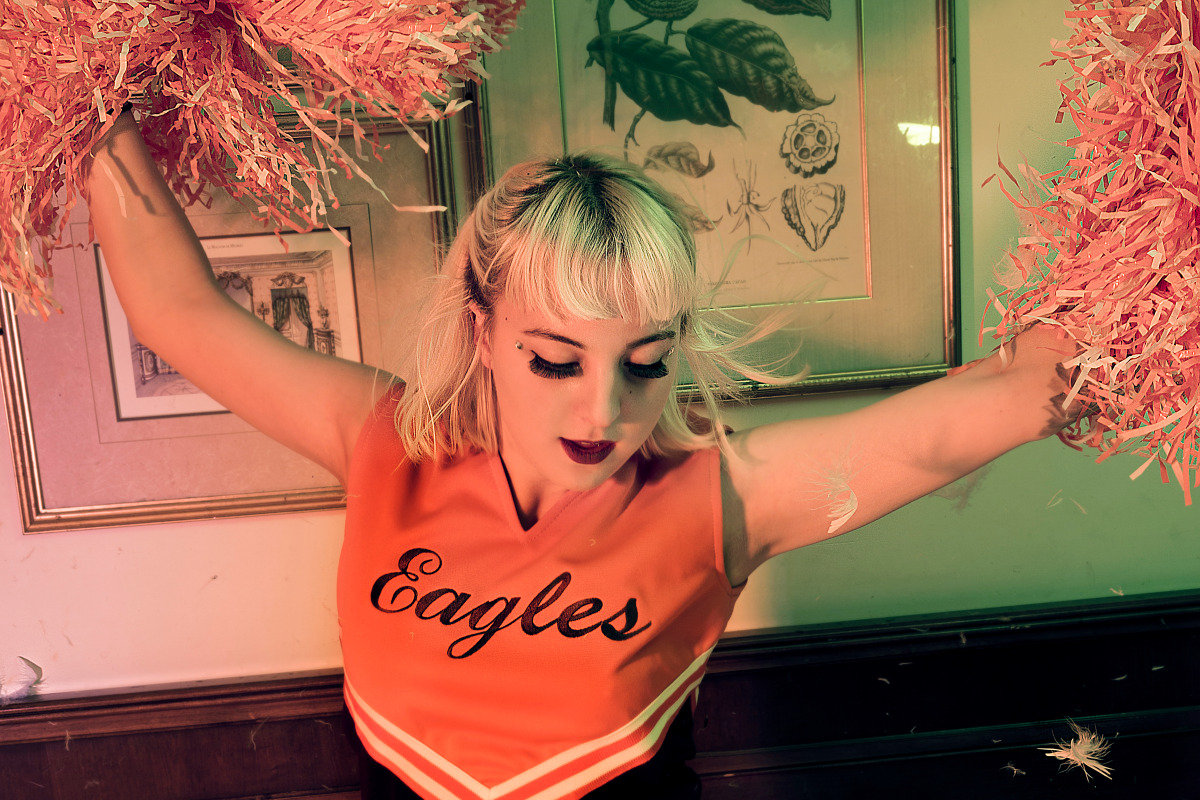 Lowell – also known as Elizabeth Lowell Boland – has been making a name for herself as an outspoken and unapologetic pop star. The Canadian singer/songwriter/multi-instrumentalist makes incredibly catchy tunes, isn’t shy of controversial topics, and has already released two EPs (I Killed Sara V and If You Can Solve This Jumble) to critical acclaim. Her latest album We Loved Her Dearly explores more of her as a talented musician, and shows her coming into her own. We got to chat with her whilst she was on tour in the US about being a pop star, who Sara V is and why Miley Cyrus can keep doin’ what she’s doin’!

You’re on tour at the moment! Where are you?

Yeah! I don’t know exactly where I am right now, but it’s awesome. We were driving through the mountains and we arrived at some random lodge that looks like something from Nancy Drew in Oregon.

How has it been so far?

It’s been really nice. I’m not really sure when the tour started… We had some dates on the east side, and then we cam over here. It’s been a nice drive and we’ve had some good shows.

Have you had any highlights? Is there anything in particular you’re looking forward to?

I’m so instantaneous, I’m always like, and “Yesterday was amazing!” But yesterday I would have also been like, “Yesterday was amazing!” *laughs* Portland was awesome. We just played there yesterday and the fans were all really great and dancing and I made friends with some people. I wish I could have stayed longer! Also, in Victoria, it was my birthday and everyone in the crowd sung Happy Birthday to me!

I know! That was a good highlight!

What does your live show involve? What can people who haven’t seen you before expect?

It’s still growing in a way, and I’m still moulding it. Right now there is two ways that we perform live; one is with a full band that’s really loud and more “rock-y”, but right now for these dates, it’s just me and Matt who’s manning keys, guitar and the laptop while I play multiple instruments as well.

Wow! What is your creative and production process?

Generally, I like to start alone. I’ll pull up Pro Tools and write songs while I produce. It flows really quickly. It normally takes me 5-10 minutes to write a song, and then I spend the rest of the time editing it and fixing it up. Afterwards, I love collaborating with people and seeing what they can add, so that adds another “sheen” to the song as well.

Do you have any specific inspirations? Have you always been into pop music?

I’ve always been into pop, but I’m just starting to embrace it more. I grew up listening to pop music, but then went through the various typical adolescent phases; classic rock, punk, I even liked heavy metal at one point, then ventured into the indie/alternative realm. I’ve explored all kinds of music but recently steered back towards pop, and then tried to make my own version of all those things mixed together in my own brain.

What does being a pop artist mean to you?

Are there any major differences between your previous works and your upcoming release?

Yeah, I had an EP with Apparatjik called If You Can Solve This Jumble. It was super spontaneous and it wasn’t meant to be a thought out thing. Some of the songs on there I had written a long time ago, but the actual process over making the record happened over 4 days. It was mixed and released shortly after that too, whereas with this record, I had been making it during that time so it took about two years.

Who is Sara V, and why did you kill her?

*laughs* Sara V is a lot of things. I think that what she represents to me is the part of me, or the female that wants to hide. I guess I killed her because I didn’t want to hide anymore.

Hiding from all the little things inside of you that society makes you think you shouldn’t have. Like when you steal a chocolate bar from a store, I could blame that on Sara V… Or, more importantly, for me it’s like the slut in me. I don’t know if you can relate to this maybe, but the times when you feel like being really sexual and people make you feel like you can’t, Sara V is the name for that.

Cool, okay! I think it’s so important. People like you that write so unapologetically about issues for women or politics are so important, especially these days. Has that always been a passion of yours, or has it kind of grown as you’ve taken a more influential place in the media?

I think it’s grown exponentially throughout the last two years. I’ve sort of realised how important it is to me, and I think that I’m a stronger female than I am two years ago and that excites me! I write about it so that I can excite others.

And put it into catchy pop songs so people can’t forget the message!

I see a lot of female artists that I’m a fan of – yourself included – voice their opinions only to be brushed off by people or the media as just being “an angry girl”, and not knowing what they’re talking about. How do you handle people not taking you seriously with what you’re trying to say?

It’s funny, people do sometimes label me as a rebel or angry, but I’ve actually been really content with the way the media has perceived me to be. The funny thing is that before when I was hiding and when I wasn’t as open, that was when people were more likely to skew what I was trying to say. I find that the more honest I am, the less the media feel they can justify within themselves to put me down. That’s really special. There are times when people make me come across as shallow, which I’m not, or sometimes because I’ve co-written they put me down as just being a singer, which also isn’t true because I can write really well *laughs* Definitely, I still have insecurities as a feminist that I’m afraid of people perceiving me as an “angry girl”, because I shouldn’t be afraid of that! I should be angry sometimes, and I should be frustrated, and as long as I go about it in a calm way I have nothing to be ashamed of.

Obviously you see the importance of feminism in music and you can see that you can make a difference. Do you think that can be a positive thing for feminism? How do you think it works?

I think that anytime somebody is speaking out in an honest way about something that isn’t quite right, it’s always going to be positive. Right now there is a really interesting wave of young women speaking out in their own ways, and each one is personal and each one gets their own form of criticism on how they express themselves. I fully expect that for myself as well, but I think the more that we can speak out as young women in pop music and try to show what we can really do, the more we can go for it. Even when maybe something isn’t coming across the way someone wants it to, at least they’re trying. For example, Miley Cyrus – she clearly is young and obviously talented, and she feels that she needs to express that and she expresses herself in her own way of feminism unique to her. When people put her down because it’s too provocative, it doesn’t seem right but I think that it’s important to notice that people are talking about it. She’s still inspiring someone somewhere to be their own feminist.

Who or what inspires you?

What inspires me? Science… I recently listened to a St Vincent album that I thought was amazing. I think she is really interesting woman. I live under a rock so sometimes it takes me a while to get into these things. I saw her live in Toronto, and she was so wicked on the guitar that I went home and was like, “I need to learn guitar and be amazing guitar!” I had never really thought about playing guitar, but I guess there aren’t too many famous female guitarists so maybe that’s one of the reasons why I never picked it up as a kid! But now I’m going to learn and be amazing like St Vincent! In that way, she inspires me to do that, so then I’ll do it, and I’ll inspire someone else and it will be this beautiful wave of inspiration and success! *laughs*

I have to ask now – how did it come about that you worked with the Backstreet Boys?

I think they were working in the studio that I was working in, and I had just released Shake HimOff and Nick Carter tweeted about it! So I started writing a few songs and working with the other writers, and some of the songs just ended up on the album! Actually, just one of the songs ended up on the album. We had a few tracked by then but they decided to go in another direction, so it only ended up with one song.

Yeah! It’s hard to get them mixed. I’m not insulted!

So what’s next for you?

I’m heading over to London, to work with some awesome people there.

I think… I’m afraid to say the actual dates, but I think we’re coming in January! I’m not sure though, I think we’re just planning on it at the moment!

One response to “Interview: Lowell”