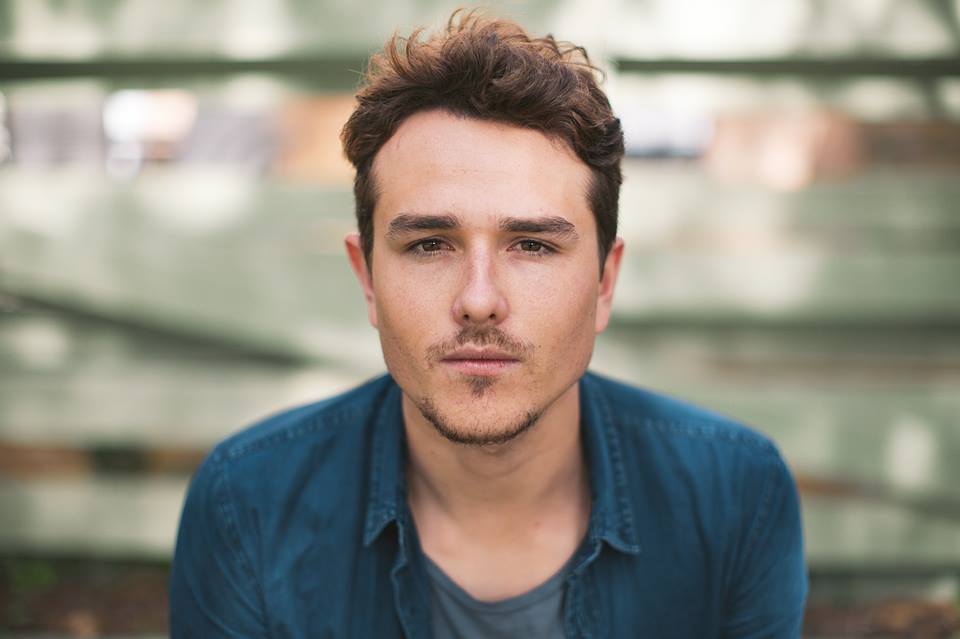 Hailing from Port Macquarie and now based in Sydney, singer-songwriter Patrick James has recently released his second EP, Broken Lines and is currently touring around the country.

You may have heard Patrick’s distinctive rich harmonies and tinkering banjo on singles, Message and Wait released earlier this year; OR you may have caught him as a support act at one of your favourite artist’s gigs – he has deservingly scored some impressive support slots with big Australian and international musicians in the past 18 months. We had a chat to him about recording, lucky charms and his recent film clip.

Hey Patrick, how are you?

Hey, I’m great thanks, how are you?

I’m great thankyou! Where abouts are you at the moment?

Just at home at the moment in Sydney.

What are you up to today?

I’m filming a video for one of the songs off my EP, just a little home job.

What a whirlwind the last year and a half has been for you! Touring with all kinds of amazing artists like Boy & Bear, Josh Pyke, The Paper Kites, Kina Grannis, Emma Louise. I’m surprised you’ve had time to breathe.

Wow! When you put it like that, that’s a lot of incredible musicians. I’m really grateful to play on those tours, it’s been amazing.

How have you found it received by the public?

Yeah, pretty good. It’s obviously a bit of a different sound to the first EP so I think there’s a natural progression with that. It’s been good so far and it’s a really exciting time at the moment- just about to head on tour. I’m really looking forward to it.

How was it working with such a renowned and respected producer like Wayne Connolly?

Wayne is one of those characters that’s just really chilled out in the studio. You can try anything and that creates a good atmosphere for everyone to work constructively in. I mean, he’s worked with some amazing artists and some of my favourite bands like Boy & Bear and Youth Group- that massive song that they released- so every second day I pinch myself and say “Man, Wayne actually recorded that song”… It’s crazy

Yeah he’s done some amazing stuff. Personally, my favourite track off the EP is Wait. The lyrics, the harmonies, the progression of the song and how it builds is truly beautiful. What inspires you the most when creating these songs?

Thanks! I think for this EP my inspiration came from touring so much and touring with the other guys in my band as well. I think that the sound comes out in the EP and when I was writing I really had that mind and wanted to make it a little bit different in that sense from the first EP. So I guess that was the main inspiration. I just really love melodies, that’s the first thing that comes to me when I’m writing a song, it’s not really the lyrics first. So that’s the real exciting part for me, and when you get to go to record, all the layers and production, it’s really cool to see the final product when you don’t necessarily have that in mind. It was really exciting recording it.

What’s your personal favourite off the EP?

Oh, well, that’s a difficult question. I would say it’s either a song called Fight With Me with Olympia. I knew Olympia for a while, I did a tour with Josh Pyke and she was the other supporting act. She’s an absolute legend and she’s was great to record with. There’s another song called Home No More- I wrote that ages and ages ago with just an acoustic guitar and it wasn’t as ‘rocky’ (as it is on the EP.) When we were in the studio we all got our electric guitars and started jamming with that song. I like to say that that’s my attempt at a rock’n’roll moment on the EP *laughs*.

Your Broken Lines tour kicks off in exactly 1 week and 1 day in Geelong. How are you feeling about that?

I’m terrified *laughs*. No, I’m not terrified, I’m excited. When you start a tour it’s pretty frantic. The week before is just rehearsals and getting everything organised- but once you do the first show it almost becomes second nature. The first half of the year my touring schedule was pretty crazy so I got used to what it’s like to be on the road for that long. It’ll come back to us as soon as we play the first show.

Yeah, and you’ve got Winterbourne with you for the entire tour, so that should be pretty amazing.

Yeah, those guys are awesome! I’ve seen them busking a couple of times and they’re doing great things as well. They’ve just had a Sydney show that sold out.

What can your audiences expect at your shows?

That’s the thing when you start rehearsing, it’s really, really fun to make the songs a slightly bit different in terms of the instrument arrangements to the recordings. I really love doing little interludes into different songs. So there’ll just be a heap of that, and there’ll probably be a few stupid things said on stage, like there is all the time. There’s always a lot of banjo going on.

Are you superstitious at all? Will there be any lucky charms on stage with you?

Any lucky charms… I have to have a cup of green tea and honey before a show, always. As far as on stage, I think…. Um, jeez you’ve got me there – you’ve got me *laughs* I think as soon as I start saying something that’s just silly and stupid, the atmosphere of the whole gig just becomes really fun and really relaxed. So I think that has to happen for me at every show just to get that rapport with the audience.

I was lucky enough to catch your exclusive EP launch here in Sydney and could immediately see and hear the strong connection between you and your band mates. How long have you all known each other for?

Different stages. I’ve known Scotty for a long time, we grew up in Port Macquarie together and Joe (the drummer) he grew up in a small town called Bonnie Hills which is half an hour out of Port Macquarie and then I met Curtis down in Sydney when I moved down here. But I mean, we’ve all been in so many different bands so we’ve all known each other for a while in that sense. It’s really cool when you get a group of guys who know what you want to do musically. I’m really happy to have those guys.

Curtis was the one getting married, wasn’t he?

Did you go to the wedding?

I went to the wedding, it was probably the most emotional thing I’ve ever been to. It was amazing.

It must be crazy to think that only a couple of years ago, you yourself were busking on the streets of Sydney and now you’re headlining your own national tour! Do you have any advice for aspiring musicians out there?

With the arts, especially music, I’m always under the impression that you’ve got to do something every single day to promote yourself. Whether that be busking or uploading a new video or even just sending one email to someone important. You’ve always got to be looking to be the next thing. Hard work really pays off in that sense. If you keep doing that, things will just naturally progress. It might take a while but that’s half the fun.

Yeah, I guess you get out what you put in.

Yeah definitely, like I said, sometimes it does take a long time to break through in any way. I’m at this point now but I’m already looking to get to the next point. I look towards the future all the time. Just keep going- do something every day.

I have to bring up your film clip for “Message.” It’s great. The little girl is so adorable.

How good is she!? She’s amazing. Jared Seng, who directed the clip had Eden recommended to him by another director. She was really confident – there’s this scene where she’s on a bike and we had to put a trailer full of suitcases behind her that were all falling off and she was getting towed by a ute as well *laughs* So there’s this 9 year old girl and she was like, “yeah, yeah I’ll do it.”

What could we expect in a typical day in the life of Patrick James?

Well, I still do a lot of busking in Sydney. I try and busk 3-4 times a week. I’m always trying to write new songs, so if you were to bring a camera into my home I might just be locked away in my room doing that. At the moment it’s all pretty full on with the busking and rehearsals and song-writing.

Where abouts do you busk in Sydney?

My main spot is down at Circular Quay, there’s some good markets down there on the weekends. When we’re touring, on occasion I like to go to other cities and busk there as well before a show.

If you decided that this type of music wasn’t for you and wanted to become a rapper, what would your stage name be?

If you weren’t a musician, what career path would you love to explore?

I did do a 1 year acting course but I wasn’t very good.

Are there any little things that the public may not know about you?

That’s confidential information *laughs* I’m a pretty simple guy, to be honest. Theres nothing too… uh… I don’t know what I’m trying to say about myself. I’m pretty simple.

If you could go on tour with any 3 musicians at once– dead or alive- who would it be?

At once? So it’s sort of a co-headline? Okay, so I would open the night. James Taylor would come out and then Radiohead. And then the big one – this is a full-fledged stadium show by the way- Coldplay would finish.

Patrick, thanks so much for chatting with me! Best of luck with the whole tour and have an amazing day!

Check out our review of Broken Lines here!