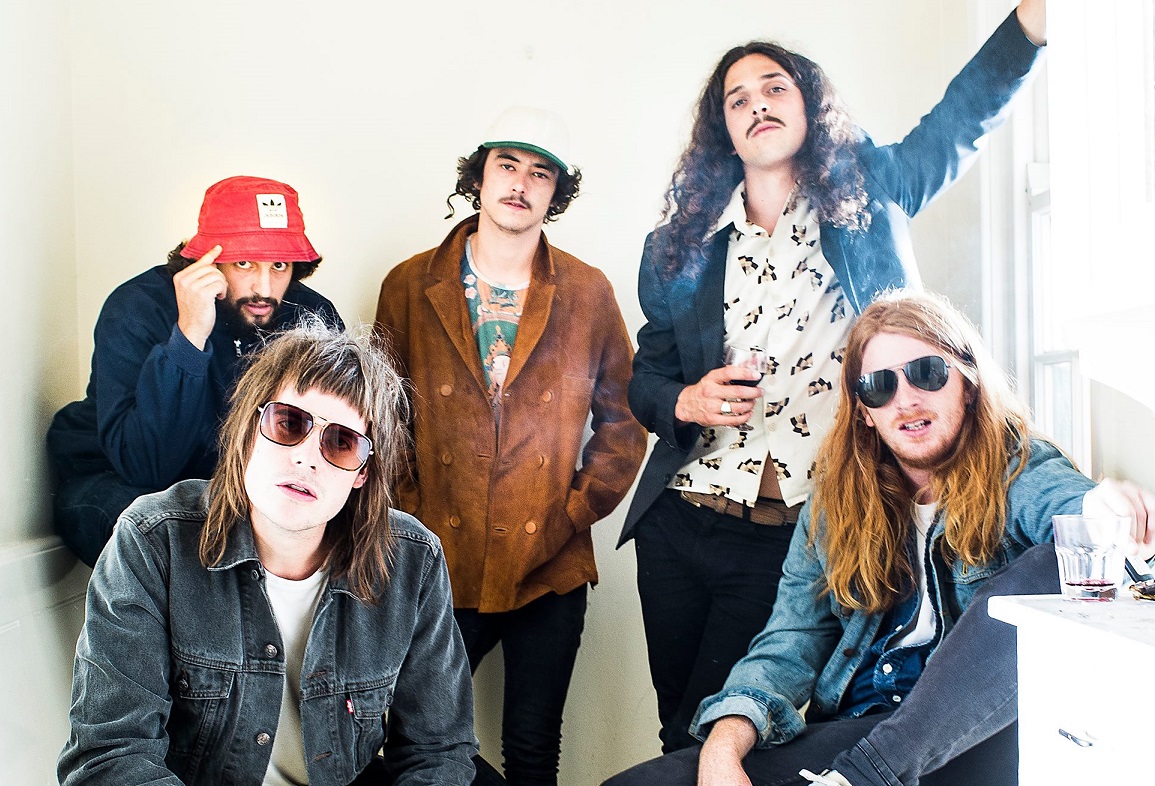 Sydney band Sticky Fingers seem to be pretty unstoppable these days. From a 20 000 strong crowd at Splendour (at 2pm), to their second LP debuting at number three on the ARIA album charts, and now a national tour selling out shows all over the nation – including FOUR sold out Metro Theatre shows in Sydney – it won’t be long before they take over the world! They’re also one of the acts on the recently announced stellar Falls Festival line up, and continue to wow fans with their elaborate and energetic live shows. We got to chat to Seamus in some brief downtime ahead of their intensive tour to get a bit more insight into the Land of Pleasure that StiFi live in.

So! Tell me a bit about your Splendour set! I’ve heard it was actually quite the highlight for a lot of punters there!

That’s good to hear! It was fucking pretty fun. It was the first time we had played, not only a big crowd like that, but also the fact that everyone was actually listening. Most times we would play a festival and everyone would just be sitting around waiting for the next band.

I was unfortunately one of the unlucky ones who was still yet to feel human at that time, but it sounded good from my tent!

*laughs* yeah it was pretty good. It’s pretty hard to recover too though!

What are some of the differences between Land Of Pleasure and your previous works? Obviously going from your mini doco, Deep In The Land of Pleasure, you guys had some serious fun making it!

Yeah! Well, the first album, Caress Your Soul, was actually a collection of songs over about five years. When we went into record that album, we weren’t actually recording an album; we were recording an EP. So with this album, we actually sat down and said, “Alright, let’s write an album!” We wrote it in a month as opposed to five years.

So you then went away and, I guess, “immersed yourself into the music”?

Yeah! We had a fucking great time in Byron Bay!

Is that how you prefer to do it – take yourselves away from everything and record there instead of in studio sessions?

Well the cool thing about recording there was we could record at any hour of the day. When you record in Sydney or wherever, it gets to like 10 or 11pm and it’s kind of like, “Oh! Alright guys, see you in the morning”, whereas there we could record until 10am if you wanted! It was a much easier way of recording.

I have to ask – that album art! What is going on there?

*laughs* I think, it was just after we had finished recording the album and we went to visit Dylan’s mum up on the Gold Coast. They had this new kitty and someone took this snap of him. Paddy saw the photo and was like, “Guys, I think I just nailed the album art!” It just kind of happened!

You guys have done your fair share of touring – have you had any crazy fan experiences or some crazy times on the road?

Definitely! We are trying to be better these days, we’re a lot more well behaved now. We have certainly pissed some people off in our time.

Yeah that’s the plan! We’ve written a few letters to hotels and venues. I won’t go into anymore details though!

What are some of the differences, if any, that you’ve noticed between Australian crowds and audiences abroad?

Well touring overseas right now is similar to when we first started touring Australia. We had no real radio play and we were relatively unknown, so sometimes we’d play to a near full room and the next night play to three or four people. It’s cool being over there now though, some of the shows have been really good. We sold out a few shows in London and Amsterdam. Generally the crowds are a bit more chilled… Maybe that’s because they don’t really know us yet? Over here, the crowds get pretty wild.

What is your creative process? You guys all live together don’t you? Does that help, musically?

We write just from like someone bringing in a guitar riff, or a vocal melody or even a whole song. We all just then sit down and work together on it. Living together, was pretty good. We don’t live together anymore, we’re looking for a new place *laughs* we’ve all had a break from each other.

Did that help in the early stages? You guys had a sort of garage studio going on, right?

Yeah, that’s how we wrote Land of Pleasure. We built a studio in the garage. Rather than jamming, we just wrote it and recorded it as we wrote it. It’s a pretty interesting way of writing.

So you’ve got your tour coming up – any thoughts or expectations on what’s going to go down?

We’re just really stoked on how all the shows are going! Expectation wise, I’m looking forward to playing all the new songs. We’ve been playing the old set for quite a few years now. It’ll be nice to mix it all in together.

Do you think the new songs are being received well? Obviously you’re selling out shows… Probably a pretty good indication right there!

Yeah *laughs* I think so. We haven’t really thought about it since it’s been released. We’re hoping for a few singalongs!

You’ve had some pretty interesting, and hilarious, video clips! Where do the ideas from those come from?

One in particular came from a drive from Melbourne to Sydney, at 4 in the afternoon with a bottle of gin!

Haha, rad! You guys obviously value the importance of the video clip. What are your thoughts on how they can be used for artists like yourselves, with the Internet? Especially if Coldplay steals your idea!

*laughs* I think it’s really good to have as much content as you can on YouTube, so if someone finds one song and they go online, after two hours they’re a fully fledged fan!

What are your thoughts on responses to Land of Pleasure saying you’ve “changed”? What do you say to that?

Well I don’t think we’ve changed; I think we’ve evolved our sound. I don’t think anyone makes a conscious decision to change unless you’re like Madonna or some crap. The way we’ve all grown up and the way this album was written compared to the other one – collection of songs over five years as opposed to one month – that’s different and contributes to the sound. But, you know, whatever; if they like it, they like it! *laughs*

Well I think you guys have definitely evolved and “matured”… I’m curious how the reggae same to be the Sticky Style?

It actually can’t from Dylan! He’s a Kiwi and reggae is really big over there. When the band first started, he started doing this skank stuff and we thought, “Well this is fucking cool!” The Clash are a big influence for us. You know Sandinista by The Clash? Everyone hated it but it was a big influence on us! “White Boy Reggae.”

I like that! So what have been some of the highlights over the past 12 months?

Europe was really fucking fun. Touring is always fun. Just the way the album has been received and the way everything is going! We’re stoked!

What’s next after this tour?

Straight back into it, then?

Also appearing at the Falls Festival and Southbound Festival