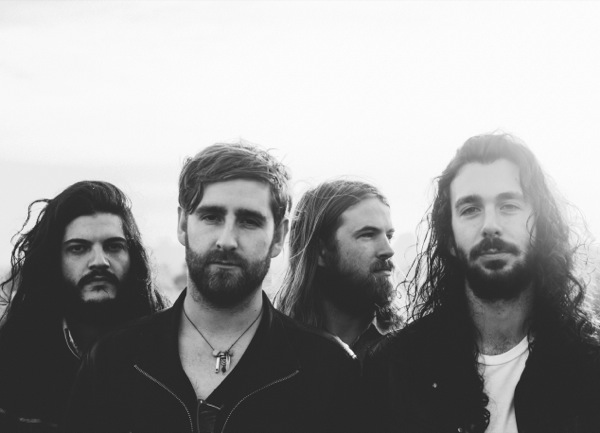 Kingswood have been on my radar since they snagged a slot in Splendour in the Grass in 2012. They’ve spent the past 12 months gigging around the country; whether it be intimate local gigs, huge support slots or electrifying festival sets, earning new fans and a strong reputation at every turn.

Kicking off the night was Melbourne trio, The Sinking Teeth. Hesitant though they were, the crowd was swept up by the energetic, vigorous set and the awkwardly hilarious on-stage banter. Their solid set was tight and hard-hitting, showing some really promising things from these up-and-comers.

The atmosphere in the venue rapidly intensified as rockers Kingswood graced the stage. From the very first strum, there was not a single empty space on that dancefloor. Opening with All Too Much, the intense, energetic atmosphere didn’t falter for a moment. She’s My Baby was riddled with insane drums, distorted guitars and and tight harmonies, and I Can Feel That You Don’t Love Me immersed the crowd in sexy vocals from Alex Laska and bluesy vibes. The astounding guitar solos really got this crowd moving.

It’s easy to see that Fergus is at home on stage. He engages with the audience with tales of the tour, introduction to every member of his team (sound engineer and guitar tech included!), pulling people up on stage and exposing a vulnerable side by nervously announcing that it’s the first time they will be performing Eye of The Storm. He even survived an on-the-spot impromptu improv number which included lyrics like “Some bands are good, some bands are not. There’s a band called Sticky Fingers that sleep in Newtown parking lot.”

Hands down, my favourite part of any gig is discovering the band’s choice of cover song. Watching a band recreate someone else’s track really opens our eyes (and ears) as we delve into the bands own interpretation and creativity. The treat tonight was First Aid Kit’s My Silver Lining. What is usually a delicate, violin-laced folk song mutated into a hard-hitting rock track, basted with brash drums and screaming guitar.

Closing track Ohio was a definite highlight, too. Being one of their best known tracks, the entire crowd sang along with their infectious hook, “You can stay a little longer.”

Suddenly, Fergus announced that good friends Sticky Fingers were in the building and invited them on stage. The crowd went wild, and the prolonged hook immediately (but unsurprisingly) took on a more reggae StiFi-esque vibe. Being a massive fan, this was such a great moment in the set!

This gig delivered nothing less than what you’d expect from a sold-out Kingswood show. High energy, a vibrant and enthusiastic crowd, a few intoxicated fan-girls and an outstanding performance by the band.

Also, catch them at Falls Festival at the end of the year!