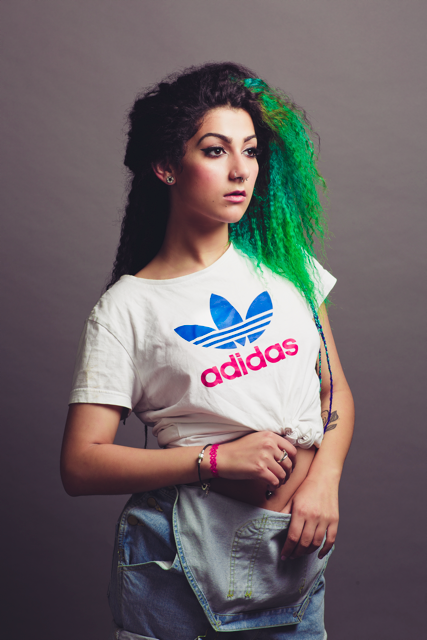 Lily Vamos: Q & A and Giveaway

17-year-old Lily Vamos is a passionate, hardworking performer with high hopes to set alight stages across the world with her pop music melodies. From an early age, the Sydneysider showed a deep interest in songwriting and performance, and she released her debut EP in June.

We’ve got 20 copies of Lily’s debut EP to give away! Simply email lauren@scenewave.com with LILY VAMOS and your name in the email, and you could win! We’ll be drawing the winners on Friday September 26.

We asked Lily a few questions about her influences and journey so far:

Hi Lily! What are the three most important things we should know about you?

I’m a Sydney girl, born and bred; I have a powerful and indescribable relationship with music; you may not have heard my name yet, but you soon will.

For those who don’t know you, how would you describe your music in one sentence?

A new aged spin on R’n’B/pop, with meaningful lyrics and a soulful vibe.

How did you first get into making music?

I was inspired to write my first song at 12 after watching Justin Bieber videos. After penning that first song, I knew I wanted to be in this for the long haul.

Describe your first ever gig?

Euphoric! With little performance experience under my belt, I found myself singing and playing piano in a three-hour solo gig in South West Rocks. It felt like 20 minutes. When I finished, I wanted to get straight back up and do the whole thing again.

Where do you draw inspiration from with your songwriting?

Personal experiences and the emotion attached to them; travel (I’ve done a lot from a young age); meeting people from different backgrounds and with different life experiences. Any major event in your life should be lived and felt and documented in some way. I feel lucky that I’m able to make a song out of the big moments in my life.

What are some of your biggest musical influences?

As a child, rock was the major influence. My dad was, and still is, probably KISS’s number one fan. Later I developed a love for R’n’B. Now my main musical influences are Erykah Badu, Lauryn Hill, Lana del Rey, Rihanna, Mary J Blige and Jessie J.

Who are some of your favourite artists from Sydney?

You’re only 17 and you’ve already got a record out – has it been difficult to find a balance between your music and things like school or friends?

Going from someone who just sings with their friends to becoming ‘a brand’ as such has been hard at times. But knowing this is something I want to do for the rest of my life makes it easier. I know that the people that really support me will be there no matter what.

Can you see yourself staying in Sydney as you build your career, or do you think your music might take you overseas (and if so, where)?

Sydney is home and it’s where I’m building my career. But I definitely see myself heading to the US in the future.

What has been the greatest moment of your musical journey so far?

Every day as I work towards my goal feels like the greatest moment – it’s like an ongoing moment as such. I’m lucky enough to have had endless amounts of support from my family and good friends, and that, coupled with my love for music, is what keeps me going.

But if I had to pick a single moment, it would have to be the launch of my first single. I was standing backstage and my name was announced and hearing people scream and applaud and stand from their seats just to see me perform was insane. I will never get sick of that feeling.

What has been the most difficult part?

Understanding the difference between Lily the person and Lily the “brand”; staying focused on the moment when so much is happening so quickly around me.

If you could collaborate with anybody, who would you choose?

If you could cover any two songs, which would you pick?

They Don’t Really Care About Us by Michael Jackson. That would be a challenge and I’d love to work on a project like that. And Doo Woop (That Thing) by Lauryn Hill, another song that has such complexity mixed with simplicity to create a movement in a song.

What are you listening to this week?

My song of the week is a 90s classic – U Blow My Mind by Blackstreet.

I’ve got some unbelievably exciting things lined up which I’m sorry I can’t tell you about just yet. All I can say is it’s going to get extremely busy soon and I can’t wait.