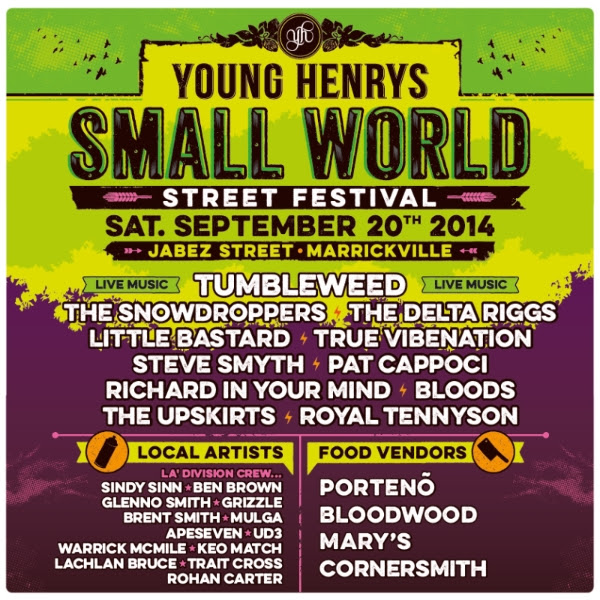 For starters, the food was bloody tops- the smell was enticing from the entrance, and even better in your mouth. There was meat on meat on meat on meat at one stall; at the next were pickle sticks and toasties. Diversity was their strength… and my downfall.

The bar was smooth, and while the lines were long, the wait was never more than five minutes – and each and every beverage was cold, fresh and tasty as heck. Some even featured a hefty slice of fresh grapefruit which pretty much justified all the pickles and booze I’d snuck into my body. These brewers clearly know how to run a bar. That said, some of the festival type amenities could have been a little better.

While live art scattered the walls, it was often covered by a long and meandering line for the loos (and pass outs weren’t allowed so a cheeky wee elsewhere wasn’t an option.) It would have been nice to have an extra block of space and a couple of extra spots to sit, but this was easily forgotten because the love for this mash up of Saturday activities ran as freely as my urine did once I got to the front of the line. This was most obvious in the response to the legends taking the stage.

Highlight acts include Royal Tennyson who put their Money On The Table by opening the whole thing up with a blast of fresh excitement and proof of Sydney’s still burgeoning music scene. The Upskirts got on after a bit to dirty up the joint while the sun was still out and, along with the rock-laden trio Bloods, set the tone for a full day of grunge-loving, beer ridden cheer. Steve Smyth wielded the best kind of grit and Pat Capocci bought the audience into a filthy rockabilly bar from the 50s and they bloody loved it.

Little Bastard’s performance featured role changes, a Beatles cover and some effervescent business bordering on ADD- which inspired the same kind of energy from an ever growing crowd. The Snowdroppers had on dressing gowns as if to directly oppose how lively their performance was, and Richard In Your Mind had a lo-fi prowess known only to them.

The Delta Riggs showcased some serious development following their Europe and UK tour. Frontman Elliott Hammon was sporting a mod style shaggy crop of hair allowing the best, and most luscious, head-banging to go with their very English style of pop-rock. True Vibenation were working with a pretty keen crowd already, but met all of the highly-set expectations. By this point, everyone had at least three pints of beer spilled on them and the beer soaked sounds of the steadfast headliners, Tumbleweed, professed that the beer belonged everywhere, on clothes, in music, definitely in the crowdsurfing bellies. They finished the evening off perfectly, by taking everyone back to the grunge they had heralded throughout the day with a spot of reverence and a whirl of fun.

Scratch that. Highlight acts include all.