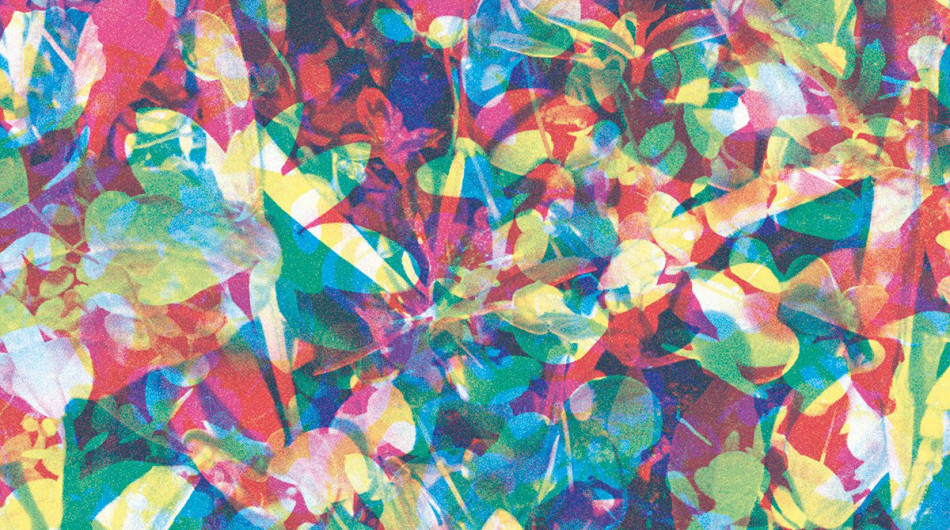 From a music fanatic’s perspective, the outputs of Canadian Dan Snaith (aka Caribou, previously Manitoba) have never ceased to interest me. In pictures, he looks like he’d be good at maths, and what do you know – he has a PhD in it. Thinking man’s electro, etc, etc. And so the clichés run from there… how his music is analytical; measured; laboriously crafted. But really, this can be said of most producers in Snaith’s ilk. Aphex Twin has emerged from his cave of hibernation, while chaps like Kieran Hebden and Jamie xx are operating at full speed too. None of those could ever be accused of sloppily mashing together breakbeats or clumsily assembling arpeggios and junk.

And Aphex Twin is the electronic artist, right? So why bother with Dan Snaith’s latest offering when you can listen to minipops all day until Richard James unleashes Syro somewhere on the deep web? Well, if you want my two cents, Our Love is going to be more deserving of your ears.

The album cover is a good indication of what you can expect on Canadian Dan Snaith’s fifth full length LP under his Caribou moniker. Our Love is kaleidoscopic, zealous, life-loving and all-encompassing. It sounds at once breezy and simplified, and still manages to etch its way under your skin. At a base level, it’s an expansive take on Snaith’s brilliant 2010 offering, Swim, which spawned crossover hits in the form of poppier behemoths like Odessa and Sun, ubiquitous in hipster shops and even FIFA (my two favourite things).

Sure, even today that rattling swamp wallop of Odessa sounds electrifying. But this stuff is better. Seriously, the utterly monstrous hook on Back Home stands up with 2014’s biggest and brightest – see Chandelier or Seasons (Waiting On You). The effervescent All I Ever Need still sounds like “music made of water”, but it’s the faux steel drums that will stick around. But Snaith hasn’t gone totally pop on us just yet – there’s still the Spector-esque wall of sound builds found here on lead singles Can’t Do Without You and Our Love. The latter is particularly overwhelming – with only the repetition of two words, Snaith creates a truly moving atmosphere that could sound either mesmerising and optimistic, or melancholic and downbeat – depending on how you, the listener, feel. I wonder how he came up with the equation for that.

Jessy Lanza crops up on Second Chance, delivering a beautifully off-kilter performance. In it you find a key change into the chorus – awkward and abrupt, but somehow works. It’s a good reflection of Snaith’s knack of finding a melody that otherwise simply wouldn’t be there. Not surprisingly, then, Second Chance sounds like another artist who’s done rather well for herself this year: FKA twigs.

Soon, I’ll be heading to wintry Budapest to see Caribou at his album opening party. Don’t ask me why I chose there to see him of all places. It was a random choice; just as it seems Caribou is now making perceptibly random choices in his music now, but still coming up with beautiful results. Other than the cop-out I used before – an “expansion” – Caribou’s musical progression here is difficult to describe; it’s definitely not as straightforward as it was from his 2007 album Andorra to Swim, for example.

One thing that is easily seen, though, is that Snaith is currently operating in two different spheres – as he demonstrated the other week, when he remixed the title track under his “dance” moniker Daphni. He’s been very open about this type of dichotomy – making ‘club ready’ music and then making ‘headphones’ music in a separate pile. Daphni’s remix strips Our Love of some of its emotional heave, but does what it purports to and converts it into an out-and-out banger. In saying that, I defy you to sit still on your bed as you listen to this. As Your Love Will Set You Free’s never-ending trance closes out the album – complete with Snaith’s confession that the only thing he wants is “to caress you” – you realise a few things you didn’t before. One is that 42 minutes have coasted by in what seems like less than half that time. Nothing outstays its welcome, but no idea comes across anything less than fully realised. And the other thing you notice is that every single track here has emulated what was on Swim. You don’t need to wait and pray for Syro salvation: the year’s best electronic release is right here.