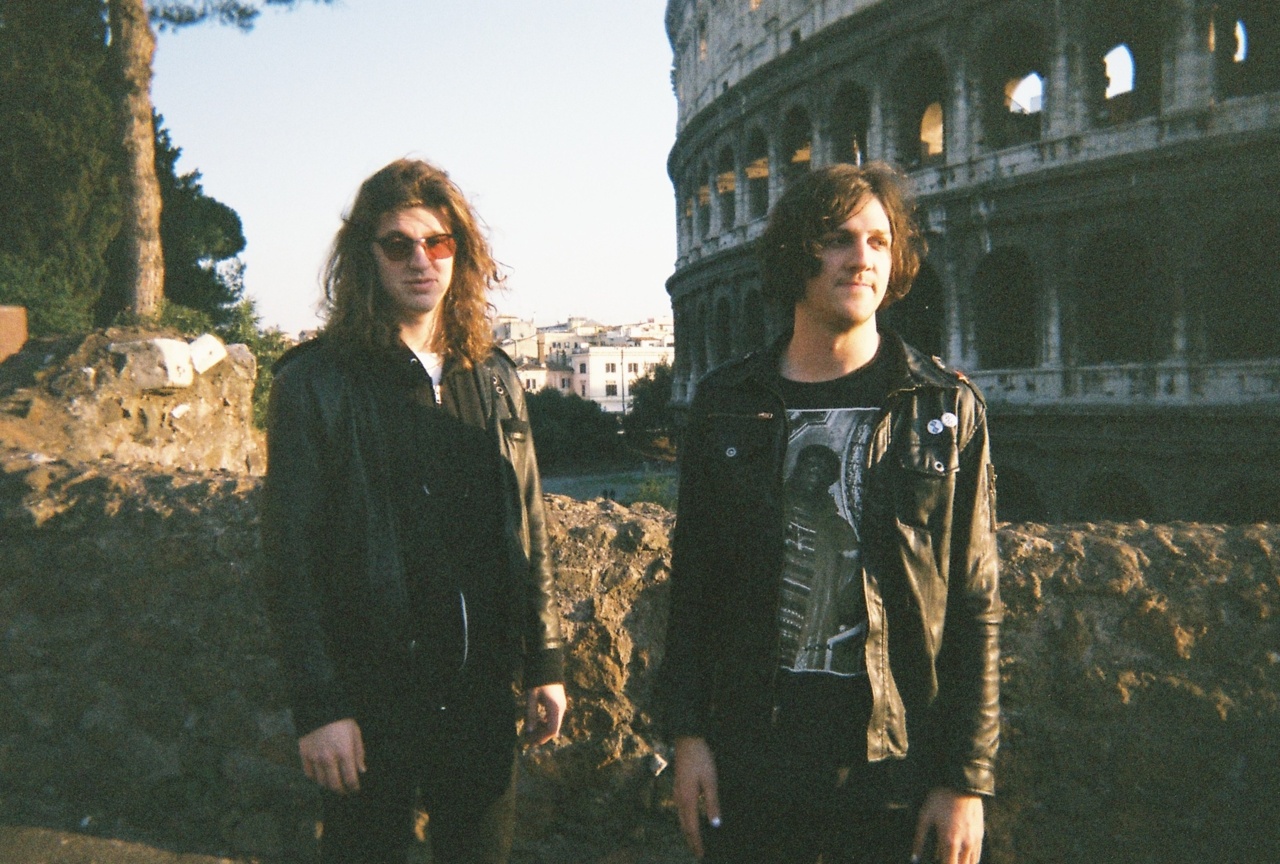 Starting off as probably the coolest one man band ever, Bass Drum of Death‘s John Barrett has come a long way since the early days of stomping on a bass drum, shredding on his guitar and wailing into a mic. He’s now recruited friend and frequent collaborator Len Clark full time to bring us their third studio album Rip This. They also managed to get Unknown Mortal Orchestra‘s Jacob Portrait for producing duties. The result is cleaner, tighter, but could still give you whiplash with it’s fast pace, and leave your ear drums ringing. We had the absolute privilege of chatting with the legend himself in some very rare downtime in his constant tour schedule. Long live Bass Drum of Death!

You initially played everything on your own, isn’t that right? Why the decision to recruit Len Clark as a full time drummer/collaborator?

Len has been one of my close friends for a while now, and I wanted him to start playing in the band after Con(?) decided to leave. He told me he wanted to do it too, but he wanted to be a part of it; he wanted to be invested in somehow. I was like, “Well, yeah that’s perfect because I kind of need some help!’ Doing everything on your own is great for the control freak in me, but I think it’s really nice to have somebody to bounce shit off of, and someone who holds you accountable for certain things. Even just getting together and jamming – he does a great job of that! I think it’s one of those things, and it came to a time where I was really bored so it was sort of like a “no-brainer” option!

Do now you think it’s more beneficial to have a constant collaborator then just someone who was hired and comes in and does their thing?

Oh yeah, for sure. I still do most things the same way. now it’s just like I do everything the same way, writing and recording demos and stuff, but then I take it to him and he’ll write parts. It’s just good because he’s there to bounce stuff off of, and it’s always good to have a second opinion when you’re doing stuff like this. I’m always my own worst critic, so it’s really good to have someone say, “No, this is good, but you can do away with this bit”.

What was it like working with Jacob Portrait? I read that you “convinced” him to come on board, how much convincing did it take?!

Not much, actually! He was always down for it. We’ve been buddies for a while, and toured together for a while. It was just one of those things that came about naturally: we were on tour with them, and he was like, “Fuck man, we need to do some recording!” It just worked out perfectly; we had a deal with Innovative Leisure, which was super helpful with the financial stuff. Everything just worked out really well, and I think we tried our best. I think we did alright, we’re all super happy with it!

I think you did alright too! You recorded everything live – is that how you have done it previously?

No, normally when I’ve done it myself, I start with drums and add everything after that. Obviously I can only play one instrument at a time! But yeah, we did the basic tracks (guitars and drums) live, and then I went back in and did some over-drums. I think all the over-drums are pretty minimal though. I went back in and did bass, and a couple of lead parts, but other than that we were pretty much done with the record in about three or four days. After that, we just added some stuff over the top to flesh it out a bit more. That’s not how I’ve normally done it, but it was nice because it was a lot faster.

Do you think you’ll do it that way in the future?

I don’t know, hopefully for the next one we’ll have a bit more time in the studio. I kind of want to try different approaches and play around with stuff. There are some songs that are just gonna sound better if you do it live. I’m not really married to any one sort of method of recording or anything. I’m still learning a lot, and recording in general is just throwing a bunch of shit at the wall and seeing what sticks. Hopefully we’ll have a bit more time to experiment, and just figure out how to get better!

I think that comes through in your albums too, like different methods of going about things!

Yeah! I always want to change it up a little bit, and my songs are going to sound like my songs, but I want to have enough variety in there. I don’t want to make the same record over and over and over. I’m finding ways to keep it fresh, and for people to want to listen!

So, the Left for Dead video clip is one of the most interesting clips I’ve seen in a while – where the hell did the idea come for that?!

Well, basically the concept was written by Chris from ___, the director. He’s done a video for us before, and I was saying I really wanted to do something like American Psycho or something like that. So that’s the treatment he came back with, and I was like, “Oh man, this is intense! It could be cool!” Then I saw the full thing and I was stoked about it! It’s definitely intense, for sure!

I’ve been a fan of you for a while now, and I find that with each release, your music extends further and further to some unlikely fans. Have you noticed that?

Yeah, we have a pretty diverse group of fans. What’s funny is that at some of the shows on this last tour, there was always a few older dudes, in their 60’s or something, and they LOVE it! They come up to us after the show and are like, “Thanks for keeping rock ‘n’ roll alive!” So that was crazy! I think it’s really cool that people all over the map are into it!

I have to ask, where did the name Bass Drum of Death come from? It’s such a kickass name!

Well thanks! Some people think it’s either the best name they’ve ever heard or the worst, so that’s nice! There isn’t much middle ground there! When I first started this, I would play shows as a one-man-band, and I didn’t want to sit down because I didn’t want it to be a circus act. So I stood up, and I would stomp on a bass drum while I was singing and playing guitar, just for a bit of rhythm. So, I just started calling it John Barrett’s Bass Drum of Death, and when I finally graduated to having a “real” band, it was either keep my name, or keep “Bass Drum of Death”. I thought it was the way to go. It’s funny; I think band names are just whatever, it’s neither here nor there, but it’s funny to me when I read reviews and they reference our name as if our music is supposed to have anything to do with the name. They say, “Oh, their name is Bass Drum of Death, but they don’t SOUND like that!” It’s always funny to me when people place so much importance on a fucking band name.

Yeah! But, you know… Whatever!

I found Rip This is a bit tighter, a bit cleaner, but still pretty “in your face” – how did you maintain the grit but make it a bit tighter this time? Do you see that?

I just kind of wrote the songs, and once I’d written them… I don’t know, they’re all kind of pretty heavy, and fast, and loud. I was like, “Alright, this is going to sound pretty cool.” It wasn’t really a conscious decision, I just went in and we used the songs we all agreed on that would work best through the whole record. They’re all kind of fast and loud, but I mean, we’re kind of a fast and loud band. There wasn’t a whole lot of thought that went into it. We just went to the studio and turned everything up and tried to get the best stuff we could from bashing the fuck out of our instruments!

You’ve had a pretty intensive touring schedule – how does that affect your time to create new material, or is that how you work best?

I can’t really work on the road really. I’m playing guitar every day, but I’m playing songs that are already written. There isn’t a whole lot of time for writing. It’s always on the back of my mind though – sometimes I’ll be playing guitar backstage and I’ll write something down. It’s super difficult to try to work, or try to get anything productive done when you’re on the road. Your days are super full and I’m not like Kanye; I don’t have like a bus I can record on. I definitely get ideas from being on tour down that I can take back and write about. It’s a pretty crazy way to live your life, so in that way it helps because you’re going and moving and meeting new people in a new place every day. But yeah, it is a bit difficult to get productive stuff done in terms of arranging stuff. I always work best when I’m in a place for a little bit and you can go in and try to figure it out and record and be in the zone for a bit.

What’s next for BDoD? Can we expect some Australian shows soon?

Yeah, we’re actually working on it right now! I’m hoping we can get over there in February/March, we’re working on the details now so I won’t say too much about it. I’m itching to get back though. We were there a couple of years ago and played three shows, and they were super fun.

I was at the Brisbane one! I loved it!

Oh yeah! That was super fun! I’m looking forward to it and I’m hoping it works out. That time we were there; we were only there for 4 days. I’m hoping this time it’s a bit longer and we can hang out and do it right!

Rip This is out now!