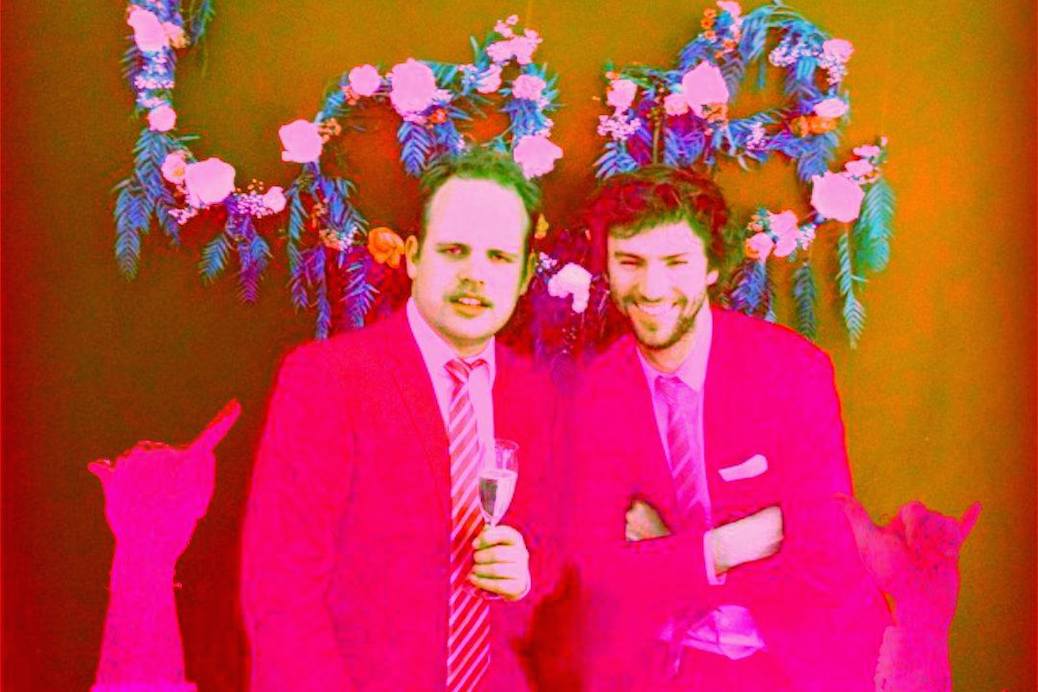 Hamish is the Ham half of the grungy Perth duo, Hamjam. The fellows have just released a debut EP, and a killer video to boot. We got on the phone and talked all about it, Fiddy and dudes hugging.

Sam: How’s your day been?

Hamish: Pretty non-eventful. Just had my second coffee to try and wake up.

You’re in Perth, so it’s just past midday.

It’s our regular waking up time

I think everyone does that.

Well, if I’m honest, a 10-3 would suit better. Anyway, your debut EP features one of my favourite songs this year, ‘Love’. It’s called ‘Love’ but I don’t know that it is necessarily a champion for ‘Love’… where did the inspiration come from?

It’s more like me just talking about not being able to say no to casual sexual encounters and [having] no filter… Just down for anything pretty much.

What happens if you get offered two?

Well I don’t have the guts to combine them…

I wouldn’t have the skill to combine them.

It’s weird. It’s just a song about not being wise with my decisions.

Why did you call it ‘Love’ then, instead of ‘Stupid’?

Hahaha. Just because I was 18. I didn’t know if that was love or not. I’m still not sure.

I’ve had a listen to the rest of the EP. It’s got a pretty washed out kind of vibe. What kind of equipment are you using to get that kind of sound?

A combination of me not really knowing what I’m doing and James being very good at what he does…. We got an old semi-mixer. I’m very into marinating sound. Making very normal instruments sound like they are… not that thing.

If I think of a guitar part I’ll play it into the computer and I’ll wrap it out with the computer or I’ll send it to James and he’ll put some effect on it I didn’t even know existed and I’ll put through something. I’ll keep going until I find something I like or something that makes my ear prick up, something that sounds weird.

You guys have worked together before in The Chemist…

We didn’t write any of that music. That was all Ben.

So is it a new experience writing together?

Yeah, up until two years ago I hadn’t really written a song. I didn’t play guitar either. So I bought a guitar with the mindset I would write some songs. And then I did that because that’s what I wanted to do, and then James is my best friend so it was just a natural thing.

Well he’d wanna be your best friend, it sounds like you had a pretty shitty resume.

Well if you couldn’t write a song or play guitar…

Hahaha, yeah. He plays drums and makes it all sound good. I just give him a shitty demo and he fixes it up and makes it better.

What are you listening to at the moment? What do you like from this year?

…Been listening to lots of the most recent Trav Scott Mixtape. I really like that. James showed me that. James doesn’t really listen to band music, he listens to a lot of R’n’B and Hip Hop. Lots of Ty $.

I wanna go there. I’ve been listening to so much ‘Tango In The Night’ I’m getting a synth as soon as I get some money from this house I’m moving out of… It’s the exact same one as they use.

Do you there’s going to be Rumours about you and James floating about then?

I’m pretty sure my Mum’s still convinced me and James are in some kind of casual relationship.

Would you rule it out?

No Way. James is hot. I’d sleep with everyone in Hamjam.

If ‘Love’ is anything to go by, you’d sleep with anyone who offered.

Do you get a sneaky butt grope in?

It’s worse than that… There’s plenty of rubbing sunscreen in. Underwear. Not many shirts. Lots of dudes hugging.

Your first song was ‘Club Going Up On A Tuesday’, a hip-hop song and you say James listens to a lot of hip-hop. What made you go from hip-hop to shoegaze + grunge?

James listens to a lot of that stuff and was listening to it one day, I was like ‘What’s this’ and we played it for like two weeks non stop and another song he has called ‘I Don’t Sell Molly No More’ which I was really into. One night we went to the pub and came home, it was a bit early so we just did a cover of it for fun.

It changed our whole recording process because it was really quick, like in an hour and a half or something just for fun and we sent it in and they were like ‘do you wanna put this out?’ and we were like ‘well, yeah.’

Well if you’re doing Hip Hop covers. Can I put in a request? Something Fiddy; Little Bit, Candy Shop, anything.

Whoa, ‘Candy Shop’. I haven’t thought about that song in a long time.

Well maybe sit on it. Think on it. Maybe do a cover. Maybe dedicate it to me. Whatever.

One response to “Interview: Hamjam”