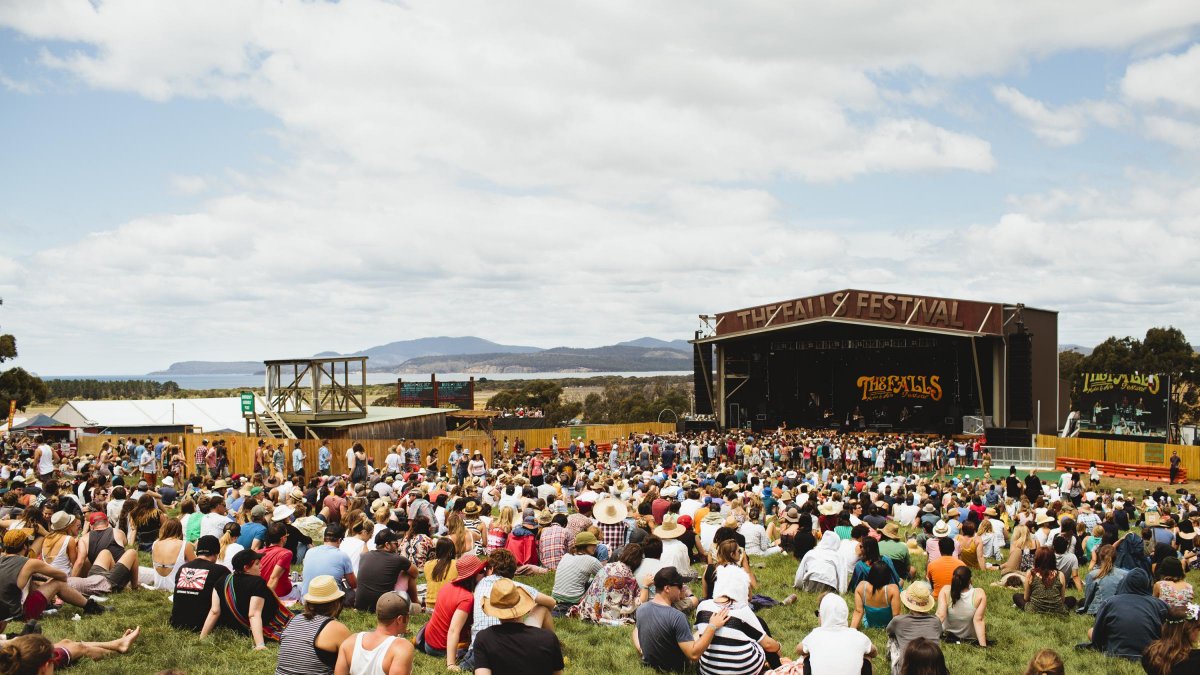 Why You Should Go To Marion Bay Falls

The great ocean road ain’t got nothing on the natural wonders of the holiday isle. Your roadtrip down to falls will be one of the highlights of your young life. In 2015, thousands of bronzed mainlanders caught the ferry across to visit the crispy Van Diemen’s land. They surfed, sunbathed, hiked and partied across the sunburnt state.

Marion bay is not like Lorne, that pill-popping teen. It is the older, cooler cousin. The one you envy. The one with long hair, babin’ threads, the one dancing unashamedly, in all their splendour.

Everyone is friendly, and happy to trade your ciggie for coke. You won’t find a better mix of people. For example, when Mac De Marco was crowdsurfing, one naïve young punter attempted to pull off his sock. His mates soon rushed to Mac’s aid. “Dude, not his sock. Not his sock.” The friend slurred, “Would you like it if Mac stole your sock?”. A lesson for us all.

Leon Bridges is infectious. His music, his dance moves, his uber-cool fashion. Polarised, most of the crowd had left the main stage to experience Bᴓrns. Those that remained, the fans, and those too munted to stand up and move away, were witness to one of the grooviest performances of the weekend. Mixing new, as yet unheard, tracks with the classics from his debut album, Leon delivered a sensational jam party. Spread those sweet jams all over my toasty ears.

Another highlight were WAVVES, who burst through the late afternoon groove into a foot stomping, dust storming mosh pit. The air was electric with the energy from both the crowd and the band.

Few festivals allow you to recover from a head-slamming night on a shimmering white beach, but Marion Bay does. Diving into the fresh Antarctic waters washed away headaches and stomach pains, leaving a smattering of human seals sunbaking in the pretty haze of day.

Fresh from the beach, the crowds swelled back to watch Kurt Vile. The vibrations from his guitar mingled into his crooning voice, creating a melting pot of pure ecstasy.

Falls at Marion Bay is unlike any festival you’ve ever been to. Sure, it’s got the same line-up as Lorne and Byron Bay. Why bother going all that way for the same thing? One thing I’ve come to realise over the past few years is that festivals start to become less and less about the acts playing there and more about the atmosphere. This seems to be the reason for the never ending stream of boutique festivals popping up, which market an experience, rather than shoving the bands in your face a la Big Day Out. Somehow, Marion Bay manages to capture both the experience along with a killer line-up to boot.

One of the things that makes Falls down there so different is the crowd. Tasmania has a distinct lack of alternative festivals (changing now with MOFO, Party in the Paddock and A Festival Called Panama), and so there’s no filtering out of people interested in different genres and, let’s be honest, people who just go to festivals to get fucked up. It seemed like every young person in Tasmania was there which of course brought along a few dickheads, but at the same time created for a pretty diverse crowd. The scheduling catered to this, meaning you could enjoy King Gizz in peace while all the brusses were muzzing out to Hilltop Hoods.

The natural amphitheatre is a godsend. You don’t have to burn yourself out standing around waiting for a band to play that one song that you sort of like at the end of their set. You can just chill out on the hill and make the pilgrimage to the crowd if you are so inclined. This means as well that when some of your favourite acts come on there’s plenty of room up the front. Hopefully that’s enough waffling on about the atmosphere to get you along next time, so here are a couple of must see acts if you get the chance.

A left field hip-hop/electronic trio is probably the best way I can think of to describe these guys, but honestly there’s no way of doing them justice. They brought everything they had out on to the stage on a Saturday afternoon and whipped the crowd into a big old dusty frenzy. It probably helped that they all looked like they were absolutely cooked on ketamine or something of the like. One of the best live performances I’ve seen.

Chaz Bundick is a bit of an odd fellow that makes really good music. He hates you calling him chillwave so don’t do that, however tempting it may be. What I thought was going to be a bit of a folktronica chill out was more of a funk show loaded with plenty of bass heavy hits perfect for cutting shapes to. He was perfect for getting everyone in the mood for the whole weekend and the sunset slot only added to the set.

Who else but the beautiful Mac. While it was difficult choosing to put him or Kurt Vile (just as dreamy) in here, Mac and his band of merry men came in purely for their banter. While cruising through the quintessential Mac Demarco setlist, him and his bandmates made you feel like you were their best friend as well as confusing the Norwegian flag for a confederate one. It helped that he was spotted crowd surfing to King Gizzard & the Lizard Wizard later that night.

Disappointments: Bloc Party, Gang of Youths, Rufus (These are essentially bands that I don’t really like too much but saw)