Hungry Kids are currently flying far and wide across the country on The Air Sick Tour. After playing a clutch of shows supporting OK Go, HKoH continued the live circuit by embarking on their own tour.

Supported by Ernest Ellis and scenewave favourites, Boy & Bear, Hungry Kids are set to debut a host of new tracks from their forthcoming debut album.

According to vocalist Dean McGrath, ‘We have some brand new songs which we’ll be playing for the first time so the show will be a little different to the last – it will also be our last tour before we head to the US and UK in April/May”.

Their hometown show is on this Friday, the 12th of March, at The Zoo. Tickets are selling fast, so head to www.oztix.com.au ASAP! 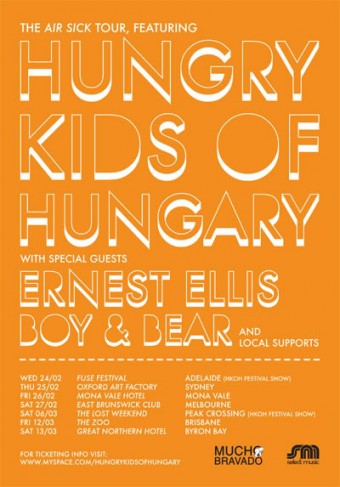 Download Set It Right and Scattered Diamonds from last.fm, for free!

Hungry Kids of Hungary – Let You Down

One response to “Hungry Kids of Hungary ‘The Air Sick Tour’”