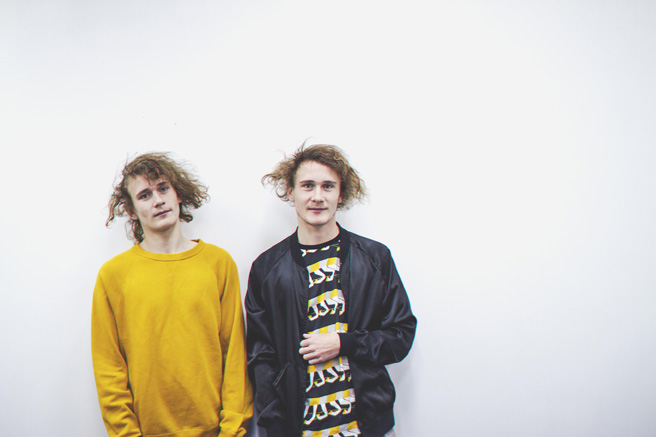 Cosmo’s Midnight are an electro duo from Sydney, made up of fraternal twins Pat and Cosmo. From what started as a project where the twins would mix from midnight to 5am, the duo have recently signed to Australian label Yes Please – home to Guerre, Oliver Tank, FISHING and Wintercoats, among others. It’s all blown up for them recently, so we had a chat to Cosmo about #twinlyfe, their Hungry Jacks’ rider, his favourite tracks to cruise down the highway to in the middle of the night, and their new single “The Dofflin”.

You guys have seemingly exploded recently, how are you coping with this?

Well yeah ,we’re getting bookings thrown at us and it’s all really good fun. Been busy choosing accompanying acts which suit us best, and completing our first tour round Australia at the moment.

Is touring life as glamorous as you’d think or is it a bit more low-key?

Some aspects of the life are glamorous… like the free stuff etc. But mostly it’s just staying at mates houses, slumming it. We haven’t got into the business class flights, or caviar entrée parties or any of that shit yet haha. Maybe a bit later.

What’s your rider request for gigs?

Our riders are pretty simple haha. A Hungry Jacks summer deal each (one before and after our gig); a bottle of Sailor Jerrys and a bottle of coke ha.

Cosmo Cramer, Cosmo the Fairy… actually this youtube video of a guy called Cosmo who played the Ocarina of Time Zelda game in like twenty mins. He’s my favourite for sure… I mean Ocarina of Time in 20 minutes… that’s no small feat.

What’s your favourite Midnight Mix and how did this come about?

So it came about by producing tracks really early in the morning, usually starting around midnight and finishing at 5am. We’re complete night owls. I’ve only recently started going to bed at normal times. It’s been pretty standard for me to go to bed around 7am and wake up at 6pm.

Ideal playlist to listen to in the early hours of the music on a road trip?

My top tracks would probably be:

Sun Glitters – “Too Much To Lose” (Regal Safari Remix)

First record you ever bought?

Best of the Beach Boys.

First record you bought that made you realise you had a passion for music?

Justice – X. I still hold Justice in the highest regard. He was the main guy that got me into producing. I was probably 14 when I bought that record.

Gone really well yeah. Got some plays on triple j. On Sunday we’re going to be on Richard Kingsmill’s show. Hopefully it gets on rotation.

Are you guys pretty chuffed with the Yes Please signing?

It’s been awesome because that’s sort of our first real signing to a label. It gives you a bit of a confidence boost, shows that someones gonna be out there and try and make some money for us. It’s cool that people actually like us enough for us to get on a label.

So you and your brother are twins, I’ve got two twin sisters actually. You’re just fraternal, yeah?

Does he ever rub that in?

He says, “Respect your elders” sometimes. Plays the elder card and yeah that’s pretty annoying. Just as a joke, but when I’m really razzed I get really annoyed by it haha.

What’s the cheekiest/trickiest thing you’ve ever done as twins? Getting into shit for free etc.

We did a bit at school. I used to wear this tie so that people could distinguish us and one day we just swapped it and he wore the tie that day. We went to each others classes and did each others exams and stuff.

Who came off better in the exams?

Pat for sure. But if we could do anything else now, probably score with each others girls or something. Do that swap in the dark situation…

Haha yeah. That could be funny I think.

As twins what’s the stupidest questions people ask you?

“Can you read each other’s minds?”

My sisters have had, “Do you have the same birthday?” before…

Actually sometimes we do finish each others sentences, but that’s more of a familiarity thing, like I just say things before he does. I know what’s coming.

Would you rather be a giant douche or a turd sandwhich?

What’s the difference between a dolphin and a dofflin?

Dofflin’s just the way I say it haha. We always just say words that aren’t exactly the way you say them. Like I was calling myself Comso instead of Cosmo for quite a while there. Kind of speak words as if we had dyslexia and say them out loud.

Which track would you play looking at the Earth from the Moon? At midnight probably…

If by some freak occurrence, you found yourself on X Factor, which song would you choose to serenade the judges?

Janet Jackson – “I Get Lonely”

If you were a wrestler, what would be your entrance theme?

Catch Cosmo’s Midnight playing at Coniston Lane tonight in Brisbane. Get down and have a look at this great even hosted by Lost Kids Klub! Also featuring the Kite String Tangle, Motion Picture Actress, Wings and Renz.