An analog sound storage medium consisting of a flat disc with an inscribed, modulated spiral groove. Have you got one of
these: 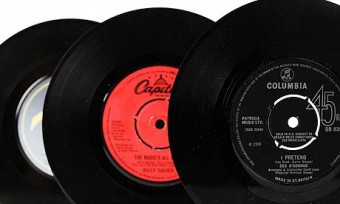 They are more commonly known as Vinyl records. If so, X and Y Bar want you to bring one along on Sunday nights, no matter what style of music it is and they will play it, as long as its on a vinyl record. This is not all! Every week they will nominate a record and if you have or can find this artist on vinyl you will receive a prize.

This weeks vinyl record is:

The first person at X and Y bar with each of these after 8pm and before 11pm will win a $30 bar tab. There will be one prize per record not only this but there is a bonus prize for signed Kamahl Vinyl.

It’s going to be awesome!

Fact: Figures released in the United States in early 2009 showed that sales of vinyl albums nearly doubled in 2008, with 1.88 million sold – up from just under 1 million in 2007. Thanks Wiki!

Knowledge, it’s not a party trick is it.

What: Vinyl Record Party
Where: X and Y, Fortitude Valley
Cost: Free
When: Sunday nights from 8