For me Comic Sans burst into my conscience seemingly as quickly as they dissipated into the labyrinth of hidden, yet insanely popular, indie haunts littering Brisbane’s Valley. 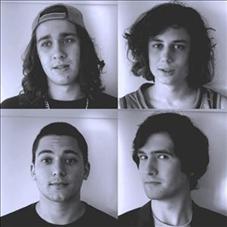 These five lads seemed hell bent on ushering in a new era of messy disco house with the aim of causing a ruckus and partying ’til the break of dawn. Warehouses seemed the inspired venue of choice, and the ground swell of followers seemed to grow with every loose night out.

But this all came to a head when the band broke up, leaving behind a handful of promising tracks, a few more trashed venues and a shitload of sore heads.

On August 6, a simple status update on their myspace spelled doom for the garage guys from Brissy… “sup cunts. comic sans have broken up – our last song is now on our page. our final show is at the new CLUBHOUSE on AUGUST 20. come along, go”.

From the initial bombardment that was Comic Sans to hearing the news of their demise, I only hoped this wouldn’t be the last I’d heard of these guys.

Low and behold, I caught a glimpse of a status update from a friend “check out these losers: triplejunearthed.com/millions“. I was instantly sold, and am hereby handing over all credit to Andrew Stone for the discovery!

Millions are the combination of Comic Sans and Stature Statue, and their first two tracks are gold – in particular “Citrus”.

To be honest I don’t know the guys, so they could well be losers… but damn Millions make some good music!

Take a listen for yourself and download their tracks on triple J unearthed.