Brisbane two-piece Gung Ho, comprised of Oliver Duncan and Michael McAlary, have been rocking around the Brisbane scene with single releases for the last few years, with their infectious bass heavy, guitar-laden indie pop. Originally, the two acted as sound producers for some of their friends’ bands around the place, but out of nowhere decided that they’d give starting their own band a crack. This experimental enterprise has turned into Gung Ho, and their debut release, Anywhere Else, was officially released yesterday.

Opening track “Autumn” is a cracking starter. It appropriately sets the mood for the rest of Anywhere Else, as an upbeat, guitar-heavy indie record, with catchy as hell choruses, and badass bass riffage. Maybe it was Foster The People’s “Pumped Up Kicks” that made me notice it, but I’m hearing a lot more tunes nowadays with upbeat, happy jives, accompanied by lyrics of – in that case, a school shooting, not really the same thing here – lost love, confusion, and just generally depressing shit. This track and others on the album reflect feelings of lost love and the human condition. 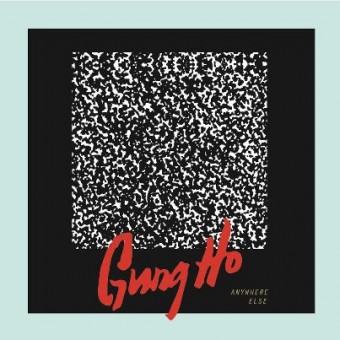 “Twin Rays”, Gung Ho’s first single, features some funky guitar riffs and thickly layered vocal harmonies, which give the track a really full and warm disposition. It doesn’t surprise me that these guys have been getting some action opening for Last Dinosaurs. It’s the pinnacle of easy listening, and as I sit hear effortlessly absorbing the tunes of two, turned three-piece Gung Ho, I’m certainly glad I’ve been introduced to them.

Another awesome track is “Brusca”, and as well as exemplifying the band’s guitar proficiency, it showcases dreamy vocals, which they’ve achieved through a shitload of reverb on the vocal tracks. This echoey sound ties each tune together really well, and while not repeating themselves, it gives the album excellent cohesion and flow.

The second single from the record is “Strangers”, and it’s a gem. It features some catchy, jangly guitar chords and this ties in with the syncopated bass very nicely indeed. It took me the 5th or 6th listen to really appreciate the quality of the bass playing on the record. It’s quite subtly produced in the background, but when you really tune in, well holy shit this guy (Oli) has chops!

The final track and nearly my favourite on the record is “Side By Side”. I pick up a really 80s influence in this song, the bass lines are a bit Joy Divisiony. “Side By Side” is another track which vocalises lost love, and is a recurring theme in the album.

Anywhere Else by Gung Ho was officially released yesterday, go down to your closest iTunes store and snatch up a copy!