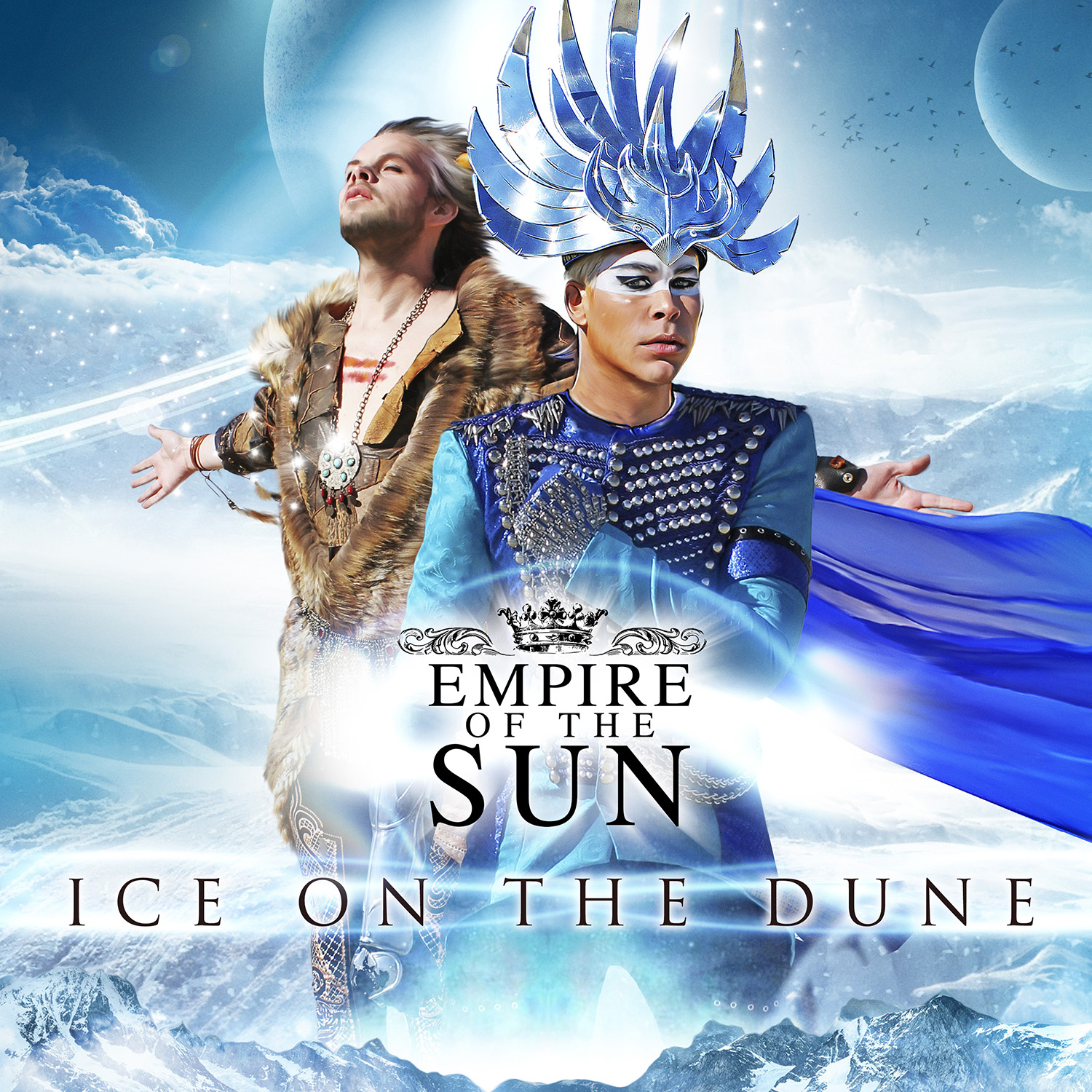 Album Review: Empire Of The Sun – Ice On the Dune

Empire Of The Sun stand out among the myriad synthpop, feel-good acts around. It’s interesting, the songs showcase a wide variety of beats, instrumentation and tempos. You can tell the difference between one song ending and next one beginning which I sometimes struggle with in this genre.

The album begins stunningly with ‘Lux,’ a haunting orchestral introduction. It’s exciting, building up and down complete with middle-eastern oboe twangs, marching drum beats and fluttering piano trills. It sounds like the opening scene of a sci-fi film and a great way to open the Sydney duo’s second album.

Acoustic guitars and mellow vocals bring us into ‘DNA’ before the first big chorus. Riveting build-ups, a pumping beat and full synthed-up vocals create an instant hit song. The whole album continues in this fashion, and I can easily imagine myself listening to any of these songs at a festival, dancing around with thousands of like-minded punters. The same goes for the next couple of enjoyable, easy-to-dance-to tracks.

Its a feel-good album and despite the oft-found repetition, there are little dull moments. I was impressed. Each song evokes its own happy vibe. While most of the choruses feature the same pumping pop feel, the surrounding beats and melodies have their moments of sparsity and subtlety.

Basically every song is composed methodically; a minimal opening, synth or bass which builds up with the beat, chords and riffs going into the verse. The bridge builds up with heavier beats and gets louder into the chorus – the perfect recipe for a feel-good hit. Yet despite how boring this may sound, Empire of the Sun have managed to keep each track quite different and generally interesting.>

‘Alive’ is angelic and uplifting. I am instantly transported to a grassy field on a clouddless summer day (despite writing this indoors on a drizzly, muggy London afternoon.) It’s light-hearted, a little spacey and very lovely.

“Lovin’ every minute cos you make me feel so alive, alive alive…..”

I love the vocals on ‘Concert Pitch,’ they’re not as synthy as most of the tracks. The tone is reminiscent of that whole Brit-pop, Robert Smith sound. It’s a nice change, making up for the uninteresting, expectedly built-up-and-brought-down structure.

The title track ‘Ice On the Dune,’ is soft and has a cute little high-pitched lick during the verses which break up the heavy beat. I wasn’t overly impressed – it was nothing groundbreaking – but again, an obvious hit single which will definitely get crowds waving their arms around during festival season.

‘Awakening’ is my second favourite track on the album. It features some chirpy synth staccatos, funky bass licks the and a lower tone – a bit Daft Punk-esque. It’s not as heavy hitting and the beat isn’t as relentless, being surrounded with some wonderful echoes and sounds. The melody is really chilled and theres this enthralling wail of “in my life, in my life” bringing us into the chorus.

“Is there a part of me that’s part of you, if I shed a tear baby, do you bleed?”

‘I’ll Be Around’ is great. It’s heartwarming and mellow, continuing away from the heavy dance sound of the earlier tracks. The minimal backing sounds and airy chorus put a smile on my face. The sentimental lyrics are some of the best on the album.

“Virtually a mystic, couldn’t ravel tonight. Harder than diamonds, couldn’t describe, running like a river while I move to the sun.”

‘Old sounds’ and ‘Celebrate’ are standard, sticking to the bass-synth-vocals-beat structure. I wasn’t jumping around the room, but they are entertaining and in keeping with their easy dance vibe.I love the opening to ‘Surround Sound,’ and the syncopated beat is really funky. The vocals alternate between a sultry lower tone and synthetic high pop. The backing synth sound almost accapella. This track is definitely understated and also one of my top choices.

‘Disarm’ is punchy and contains a plethora of awesome little licks and frills. They could have done more with it and the bridge and chorus were familiar, nothing special. The verses make up for it though. It’s little changes like this which make Empire Of The Sun one of the better synthpop groups around.

The final track, ‘Keep a Watch’ is amazing and absolutely my standout track for the album. It’s slow and sentimental; I got a Roxy Music vibe from it (who I love), which sets it completely apart from every other song. The melody really benefits from not being overly-electronicised. I listened to it a few times in a row. It’s a lovely way to end ‘Ice On the Dune.’

A great sequel to Walking An A Dream, Empire Of The Sun have made their name as a feel-good pop band with a great vibe, easy dance-beats and highly listenable melodies. They’d be great to see at any festival, and I’m sure that thousands of others would agree.