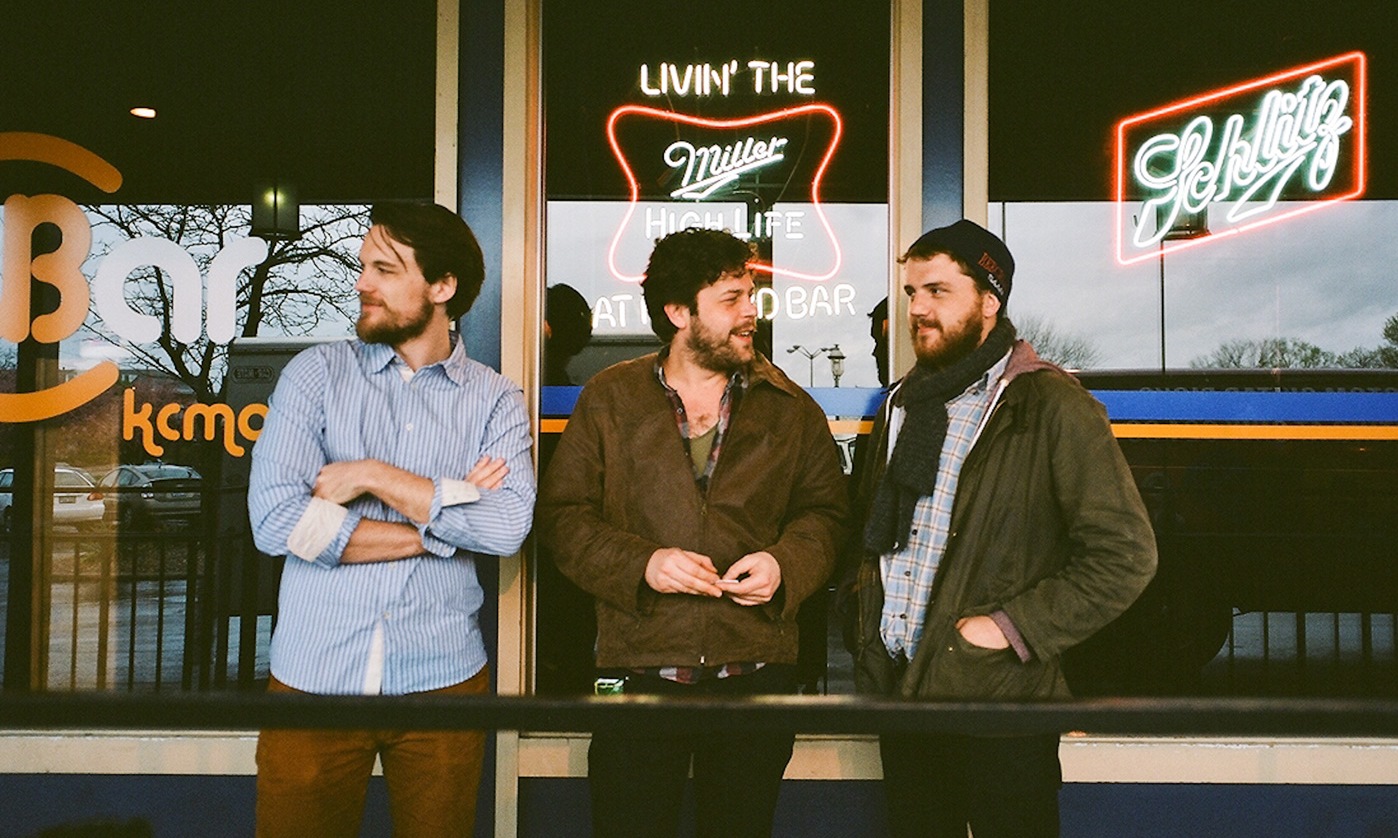 Bear’s Den are a trio out of London who have just finished touring Australia on the back of an awesome EP called Agape, and are just about to release their second, entitled Without/Within. Fans of emotive folk like Fleet Foxes will dig this stuff; it’s very nice to listen to when you’re in a very chilled mood or feel like putting the feet up. Also good getting real deep and emotional at 3am in your car at full noise with all the windows down. Some pretty soothing harmonies.

We caught up with Kev, Joey and Davie from Bear’s Den to chat shit about their Australian tour, why they clearly think I’m not a man because I can’t grow a beard and working with La Blogotheque.

SW: Been in Australia for a week now, how does it compare to the States where you’ve just spent 7 weeks?

JH: The Australian sausage. That’s a piece of Australian fauna isn’t it?

SW: How has the crowd reacted to your shows? Have you hit them with old or new material?

AD: It’s cool to finally be able to focus on the new stuff, because that’s what we’ve been working on more recently. In the States we were just releasing an EP we’ve recorded before. So it was loads of new stuff, and now the reaction has been really nice. It’s weird how those songs sort of feel safer to play now; before no one really knew them but now there’s the potential that a couple of people may know them.

SW: What’s been the vibe of your live shows?

JH: Well we’ve been playing a lot of support shows; two in the US and now the Matt Corby shows here. It’s sort of the hand you’re dealt in a way. The crowd is not really yours, so you have to play to that. Matt’s crowds are quite raucous and energetic and quite up for it.

SW: Do you change your approach for a support show?

AD: Well yeah I guess so, in the sense that you’ll say your name more often as a support band. It doesn’t really change anything though. Every show we want to give a performance by creating moments with the crowd.

SW: So tonight’s gig at Black Bear is a headline show? Is it the first one?

AD: We headlined the Soda Factory; was lots of fun.

JH: We have a couple of days off on this Australian tour which we aren’t used to after America, so we booked a few more headline shows.

SW: So what you do when you don’t have shows is book more shows…

AD: Haha. Yeah it’s a bit sad isn’t it. But that’s the way when you’re an emerging band.

SW: Davie you write most of the songs, is that right? How does it work, do you provide the skeleton and then the rest of the band adds their stuff?

AD: Haha well yeah I come in with sperm and then it becomes bones.

KJ: Jay and I are the eggs and the uterus.

AD: I come into the uteris where these two lads hang out. But lets leave that analogy there…  there’s not much logic to it.

KJ: There’s no formula; Davey will go, “I’ve written a song, help me get a performance out of it”. Then other times there won’t be much at all and we’ll all contribute.

JH: Sometimes songs come out of random jams as well.

SW: Davie, where do you draw most of your inspiration lyrics wise? I read an interview where you quoted Hemmingway, talking about where a story is like an iceberg, 20% is above water and the rest is below the surface, and the reader attributes whatever background significance to that as they want. Do you write ambiguously on purpose or do you know the 80% and it just seems ambiguous to the listener because they don’t know the reference?

SW: So they’re chronicles of past experiences?

AD: Well they kind of are and they kind of aren’t. It’s so hard for me to explain I’m sorry. It’s weird. I don’t know how to define it and if I thought about it too much I don’t think I would be able to do it. Like if one song went down well I’d automatically write another like it, which is not what I want to do. So I try not to over think it too much and write what feels right. Whatever comes out comes out.

SW: I’m not amazing at engaging with lyrics, but I had a listen to some of your stuff today; there are certainly some very heavy themes. “Isaac” and “Mother” particularly. Which tunes on your new EP Without/Within cover similar ground?

AD: I think that would be “Sophie”. Jack from Matt Corby’s band said it was like a moment song, because it’s a bit different, a bit deeper than the other songs. It evokes similar emotions to those tracks.

SW: I watched you perform “Sophie” on La Blogotheque and it totally wowed me. How did you choose the location?

KJ: We filmed on a few different locations; a cave under a castle, everywhere along that coastline was absolutely spectacular. We were then and they were there, and it just sort of happened.

AD: Doing that has been just a dream; their videos with Bon Iver, Fleet Foxes etc are just incredible. It’s really nice because most vids you do there’ll be two or three people around filming, and it can feel a bit unromantic. But it’s pretty special when you’re out on these rocks and this one guy is circling completely getting into the soul of what you’re doing, it’s amazing. Huge honour to be apart of that.

SW: What do you guys think of the fact that I can’t grow a beard?

SW: Because I’ll tell you what, when I have a crack it’s 95% neck, just wiry pubey hair that just looks terrible when it’s grown out…

AD: I think if you’ve got enough hair, you could try the comb over approach, where you can brush the neck hair up so it comes up over your face and mouth and stuff.

KJ: Or you could just grow down from the sideburns and tie a knot like a little bow tie under your neck. Under your collar. Then take some strands and put it up around above your lip.

JH: Kev’s really thought about this… Your face looks as soft as a baby’s bottom.

SW: I know, but like I don’t think that’s a good thing for women…

SW: Did you guys go to school together?

KJ: Davey and I have known each other for a few years, and after a while decided to set a little project up. Then we were looking for an extra person who would be awesome at stuff…

AD: (interrupts) And then we found Joey instead (laughs)…

JH: Sometimes you have to settle haha.

AD: That’s exactly what age has taught me.

JH: I went to the psychic who told me that you’re going to meet two handsome bearded men who will take you around the world…

AD: And that’s yet to happen…

KJ: And here we are in West London just having a chat.

SW: I only ask that because there’s an artist out here called Flume and there’s recently been an article on him, which he said that since he’s got famous, heaps of girls have messaged him from school asking him out and stuff. And at school they didn’t really want anything to do with him.

SW: Has that happened to you guys?

JH: Are you saying that we couldn’t get girls when we were younger?

AD: I still can’t get girls…

SW: Does anyone treat you differently?

KJ: My cousins do. And it really pisses me off. They’ve suddenly taken a much bigger interest in my life than they have for the last 35 years.

AD: (whispers in the background) 27 you mean…

KJ: My mum’s speaking to me now.

SW: Any questions for us?

AD: Who should we be listening to? Australian or kiwi artists?

SW: Well Lorde’s on tonight, right across the road from you guys actually.

Bear’s Den’s latest EP is calledWithout/Within and is out at the start of November through Dew Process. It’s gonna be awesome.