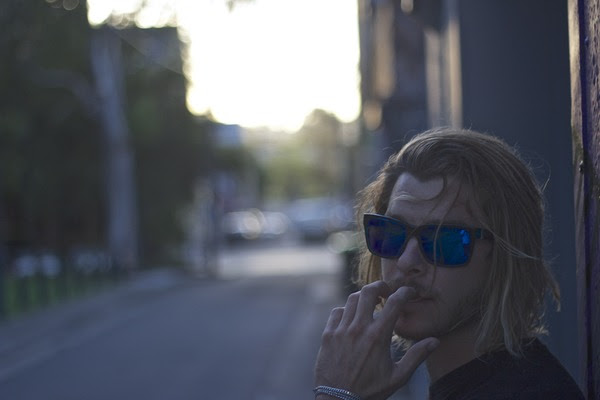 Dreamy, ethereal and lush – three words that sum up Sydney’s next best thing: Mammals. All round good vibes, beautiful lyrics and the perfect soundtrack to drifting off on Sunday with a beer and a sunset, Guy Brown’s brainchild is my latest hot tip of who you should be listening to right now! We asked them a few questions about their beautiful video clip for their song Circles, how they got a support slot for a Fractures gig, and what they’ve still got up their sleeves for us!

For those that aren’t familiar with Mammals, can you describe your music in three words?

How did the group form?

I started writing a few songs and finding the sound, but didn’t have anyone to play with. I asked around my good mates to see who’d be keen to jam; So now we are a-Mammaling together.

Why the name Mammals?

Your clip for your track Circles is pretty intriguing, can you tell me a bit about what’s going on there?

Some serious running! I channelled Forrest Gump and a bit of Usain Bolt. The director found some amazing locations right here in Australia; He’s a bloody legend.

Your debut EP is out August 15, what can we expect from that?

Each track sort of has its own vibe. There’s a lot of different emotions that went into them individually, so hopefully it evokes a few feelings and connections with the listeners.

Has the EP process been a positive one for you guys? Has it been a long time coming?

Yeah it’s been a while coming! We have been jamming and recording for ages so we’re just happy to finally be able to put something out.

Is it a collaborative effort amongst all of you? What is your creative process when writing songs?

I write all the songs and record them from home and in the studios. Usually the songs have been recorded and finished before we get together and jam it out. Nat and I then go over them and do a final mix on them.

Who or what are some of your greatest influences?

You’ve had some pretty cool people endorsing you (Richard Kingsmill, Purple Sneakers), do you find that kind of praise good for your confidence, or is it more nerve-racking to know more and more people are catching on?

Yeah, it’s awesome. It’s cool to see that those dudes take the time to listen. Really, we just want to have the opportunity to play more shows and party with the peeps. Spread some froth through music and hopefully get some back.

You’re supporting Fractures at one of his shows – that’s a pretty big deal! How did that come about?

That one came out of nowhere! It’s funny; I was listening to them the other day, loving the vibes, then the gig offer came up! It’s awesome to be able to play with such talented people.

What does a typical Mammals live show involve?

I have a very dedicated and rowdy insta-crowd of my good mates. There’s always millions of beers and good vibes. On stage is pretty similar – Plenty of rocking out and high fives.  Oh! And we also play our songs.

What is next for you guys?

We got a few headline gigs coming up. One is Sydney, then we are heading up to BIGSOUND to play. After that we cruise on down to Byron to play there. Then it’s about finishing up the tracks for the album.

Mammals are on tour NOW!