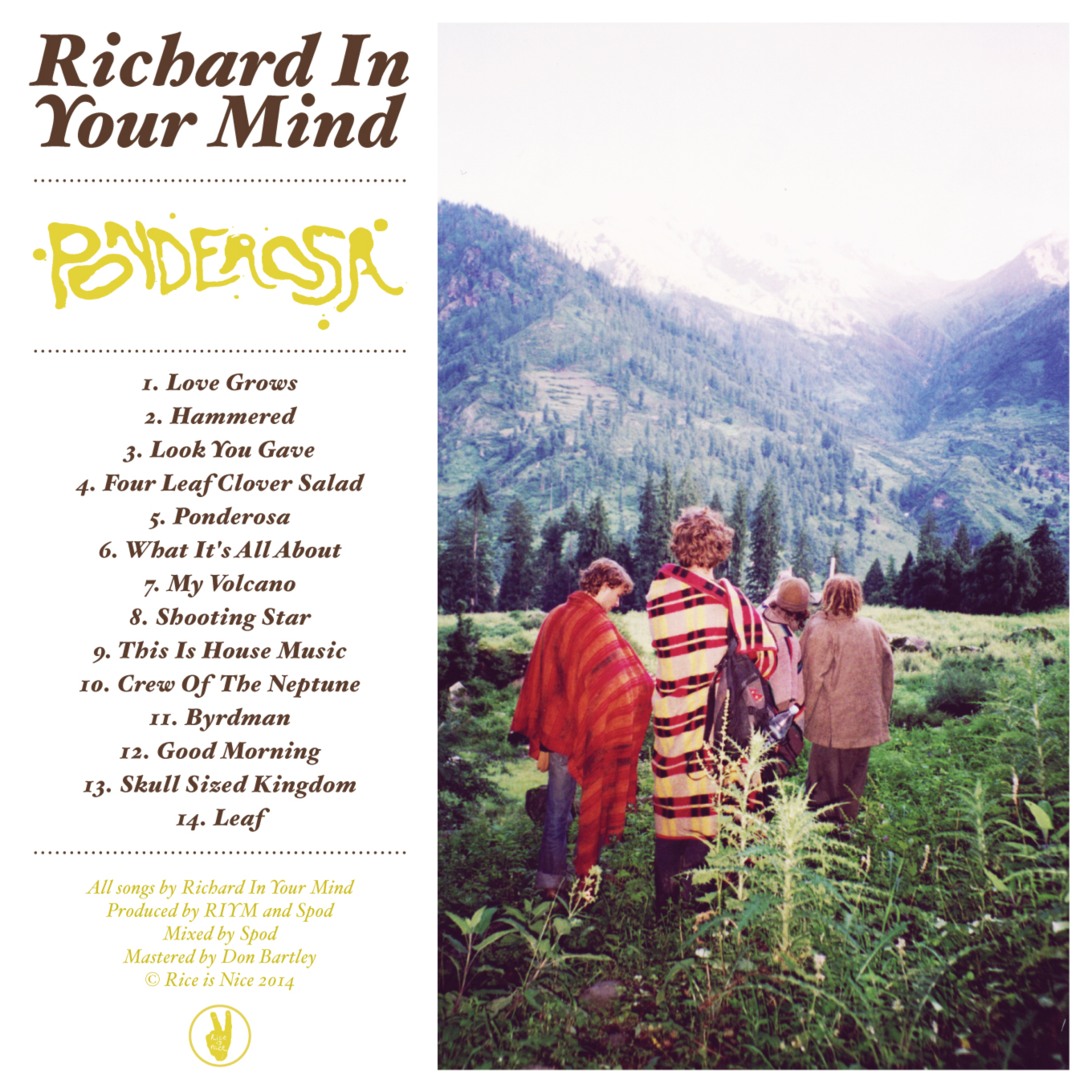 Richard In Your Mind, five dudes from Sydney headed up by Richard Cartwright, specialise in blowing brains out all over the wall. To any listener their style of experimental, psychedelic, indie pop is breathtakingly  spasm inducing. For a music reviewer it’s a total bitch. The reason I say this is because I have to somehow capture in words on a page what their sound is. If you’ve listened to their latest album, Ponderosa, you’d know how difficult that is: like trying to make a unicorn shaped peg  fit through a square hole, if that hole was made out of LSD. If you haven’t listened to Ponderosa, well now you can, because the whole thing is available to stream on Rice Is Nice’s Soundcloud (hint hint, nudge nudge, just fucking do it). It also officially drops today.

Like a mythical griffin dipped in radioactive waste, it’s hard to pinpoint what exactly Ponderosa is because it’s such an eclectic combination of a number of influences, many of which I’m not even sure exist yet (are they time travellers?). If I were to describe it, which (great segue) I’m going to do right now, it’s a bizzaro combination of a number of genres with some songs resembling The Beatles or Bowie while others take alt-electro and indietronica cues from LCD Sound System and Gorillaz. There’s also a decent amount of psyche-ambience in the line of Youth Lagoon as well as more traditional pop tunes indicative of Portugal the Man.  Hell, while I’m over-liberally comparing them to other bands, let’s also mention Glass Animals, because they’re pretty hot right now. I’m sure they also resemble about a dozen other bands I’m sure I’m not cool enough to have heard of, but the point is,  it’s hard to nail Richard In Your Mind down to a neat description. Thus, to avoid the task of summarising an entire album into one poorly informed comment, here’s a live blog, rapid-fire, track by track look at the album… that way I can summarise it in multiple poorly informed comments, and really, isn’t that what amateur music journalism is all about?

Love Grows: There’s sitar. I mean of course there’s sitar; if Bombay Bicycle Club taught me anything this year, it’s that there’s not enough sitar in the music I listen to. “Love Grows” is a slower track with sporadic moments of intense electro and drums. I like it

Hammered: A more upbeat track with foot-tapping drums tied off with what sounds like a bit of flute? Awesome twangy guitar in there too. Lyrically it’s reminiscent of past relationships where you and your significant other don’t have a lot in common so you just get high and listen to Odd Future or watch Avatar: Last Airbender. You’ve all been there… No? My favourite line is: “I’m not drowning, I just drink a lot of ocean.” There’s a really cool, lo-fi, fuzzy sample from a war movie or something mixed in at the end.

Look You Gave: Reminds me of some of Portugal, the Man’s slower tracks but maybe a bit more toned back. Solid and concise psyche pop with killer lyrics: “I dreamed I was your cup of tea; the boiled water dissolving me. You took a sip but I burnt your lip.”

Four Leaf Clover Salad: Is that sitar again? Some really cool distortion mixed in. Youth Lagoon-esque dreamy ambience. Vocals kick in at about the halfway mark and the song takes on a new life. Love it.

Ponderosa: Title track. Lovin the drums and the (I think it’s a) clarinet and the everything. About a third of the way through the song, the sickest guitar riff kicks in to steal the show. Some interesting things going on with voice in this track.

What It’s All About: If I had to describe this song in one word: boppy. That’s not even a word, but you know what, fuck you.

My volcano: Trumpet(?) or sax(?) and flute and a solid drum beat before the vocals kick in. Vaguely robotic production and distortion. Picks up at the 0:45 second mark with a killer guitar riff. Mad LCD Sound System vibes. Love it. At the two minute mark it mixes it up for a bit and everything cuts out bar some more awesome guitar, a bit of distortion, and samples of waves crashing before it goes right back into it.

Shooting Star: Pared back, melodic, soothing. What I imagine goes through babies’ heads 80% of the time,

This Is House Music: One of my favourite tunes off the album; reminds me of Gorillaz’s “Rhinestone Eyes” but toned back. Lyrically it seems to be taking the piss in the same way LCD Sound System’s “Losing My Edge” does.

Byrdman: Reminds me of Glass Animals’ “Woozy”. Gets kind of weird towards the end with whale-sex like vocal moans, which are SO in right now.

Good Morning: Heavy distorted bass mixed with… baby noises? And what might be a T-Rex trying to rap. Cool track but too much going on. I mean, that’s kind of the point, but my least favourite track regardless and the only one I haven’t liked.

Skull Sized Kingdom: Slowest track on the album. Reminds me of Perfume Genius for some reason but better(?) and more chilled out. Then, out of nowhere, like a plot device in a Bruce Willis film, comes this heavy as fuck guitar and distortion.

Leaf: I didn’t think these guys owned an acoustic guitar. Nice little outro to the album.