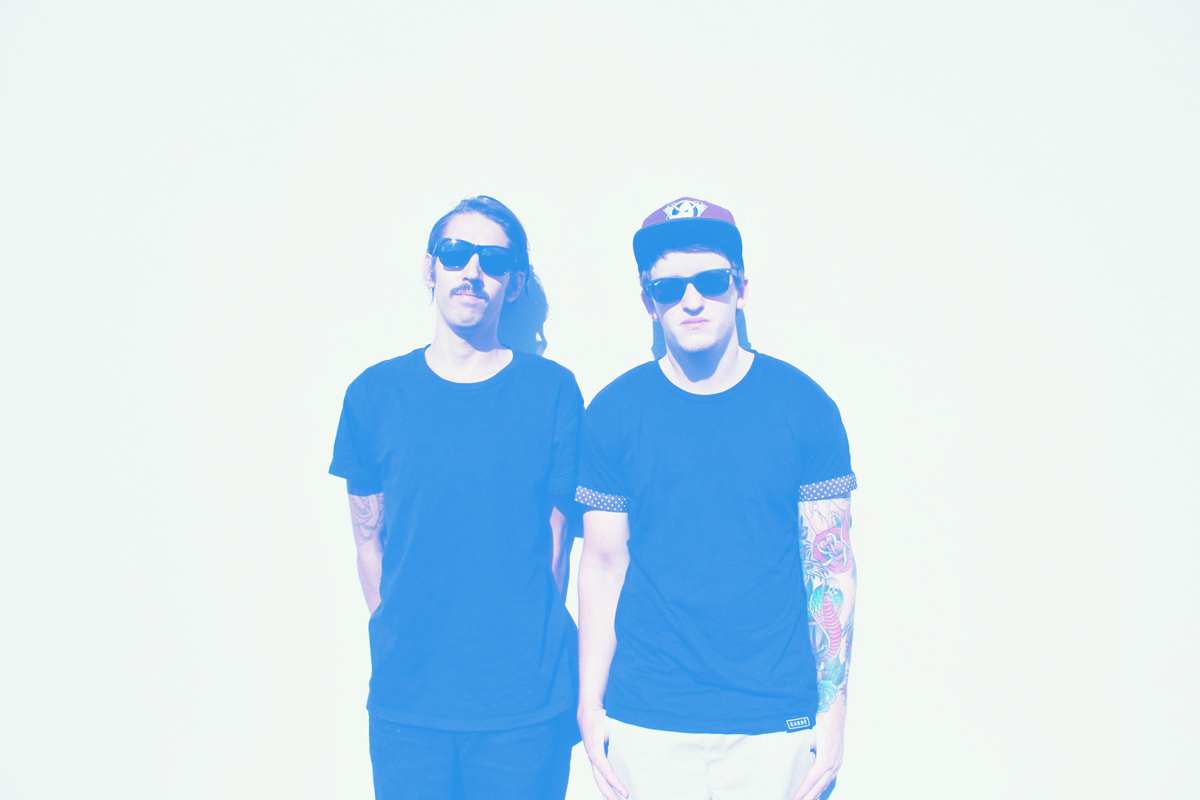 Bathurst-based electro-hip-hop duo LOLO BX may only be at the start of their career, but they’ve already been making waves  online, on the radio and on the stage. Their first release Spring EP included the single Alpha, which topped the Triple J Unearthed Electronic charts and received national airplay. Now, their much anticipated two-track EP Too Curious is set for release this week. Having already shared stages with the likes of Sable, Midnight Juggernauts, Kilter, Aston Shuffle and more, there’s no doubt that these two will soon become a staple of the ever-growing Australian electronic scene.

We wanted to get to know them better, so we asked Brett a few questions about the band name, influences and the future of LOLO BX.

What are the three most important things we should know about you?

– We’re from Bathurst but we don’t drive V8s
– We do drink VB
– Corey has a BX tattoo, and I tattooed it

For those unfamiliar with your music, describe it in one sentence:

A melodic bass cocktail tinged with age-ripened RnB and a hint of hip hop.

The first half of your name comes from a Dr Dre tune. What’s your favourite Dre lyric?

Yeah Lolo is the intro track to his 2001 album which we both love. My favourite lyric is the whole last verse from Still ‘D.R.E’.

“Things just ain’t the same for gangstas,
Cops is anxious to put n****s in handcuffs.
They wanna hang us, see us dead or enslave us,
Keep us trapped in the same place we’re raised in.
Then they wonder why we act so outrageous,
Run around stressed out and pull out gauges.
Cause every time you let the animal out cages,
It’s dangerous to people who look like strangers.
But now we got a new era of gangstas,
Hustlers and youngsters living amongst us.
Lookin at us, now calling us busters,
Can’t help but reminisce back when it was us.
N***a we started this gangsta shit.
And this the motherf***ing thanks I get?”

The second half of your name is from your home town, Bathurst. What’s the music scene like there?

What kind of music did you listen to growing up – any artists in particular?

I got Silverchair’s Freakshow on cassette at age 6 and things went from there! Korn, Eminem, Limp Bizkit, all in primary school. I was playing all kinds of punk and metal in high school bands but also had big love for hip hop – Dre, Ice Cube, Biggie etc.

Corey spent his early years listening to guys like LL Cool J and Coolio. During high school he also got into punk and metal which is how we met, through bands and mutual music friends.

Who are some of your current favourite Aussie artists?

What So Not are currently taking over the world and rightly so. Our list is huge. Slumberjack, Paces and everyone else on Die High, Sable, Young Franco, our boy Thomas Jack. Our boys from Sydney band Wasters are also doing good things on the live music front!

You’ve both been involved with hip hop production, punk bands and electronic music – which style is closest to your heart, and why?

I can’t chose a favourite. Any music that I create is close to my heart because I see it as an extension of myself and enjoy the process. The electronic direction gained more of our attention when we all grew up and got jobs and it was just easier for us to make music at home in our own time. There’s a lot of cherished memories from the live band days, just a lot of good times with the lads. Corey and I were also making hip hop together back then and that’s pretty much what we’re doing now just at a higher intensity.

Describe your first ever gig:

I think our first LOLO BX gig was supporting the Aston Shuffle at Oh Buck Yeah in Bathurst. It was a nice early time slot with plenty of intimate RnB vibes. We played a live set on MPDs, something we’re getting back into now after a stint of DJ shows.

How did the Too Curious collab with Mayo happen?

The Die High guys actually suggested we get in touch with Mayo when we said we were looking for rappers. We showed him a number of rap-ready demos, we had intended for Too Curious to be more of an instrumental but he obviously felt a connection with it because he asked to rap on that one. We were down!

Mayo is based in Chicago – was the track produced entirely through online communication and if so, what was that like? Was it a challenge?

Yep! Like I said it was pretty much a finished tune so it was a relatively simple process. Mayo hit the studio and sent his vocals to us, we cut the song up and made some musical changes to accommodate the addition of his work, mixed it all down and that was that. Mayo is a talented young dude and very easy to work with. He has an awesome work ethic which is going to take him to the top.

If you could collaborate with anyone else, who would you choose?

Anyone? Kanye West would be the ultimate. Corey especially would be stoked. He’s also a big fan of Pharrell. I’m a huge fan of Ed Sheeran and would love to write something with him. We’re currently working with a number of vocalists – both local and international, so we’re excited to expand our musical horizons and get this stuff out. The more collabs the better!

Your Soundcloud is full of awesome remixes. If you could choose anyone to remix Too Curious, who would that be?

A favourite we both share is Falcons. He’s a lord when it comes to remixes, so that would be cool. We’ve actually got a member of the Die High fam remixing it at the moment and it’s sounding tight as hell, so keep an eye out!

You’ve released stickers and t-shirts. If you could turn anything else into LOLO BX merch, what would you choose?

I’ve always been in the creative entrepreneur space so I always have weird ideas, although they only usually last 5 minutes. How about a Nike shoe collab? That would be the ultimate. Nike get at us!

What has been the highlight of your musical journey so far?

Our love lies in production and the creation of music, so the highlight of our journey would have to be seeing people enjoy what we’re putting out right now. Seeing our stuff shared by people and blogs puts a smile on our faces. Every share is its own highlight and makes us want to create more.

What have you got planned for the rest of 2014 (and beyond)?

We’re currently working on a number of collabs with different vocalists, so we’re looking to finish heaps of music this year. A tour is in the works too. Our goal is to put out heaps of music, heaps of diverse music. Everyone has different goals but we just want to work hard and stay consistent and let the rest happen.