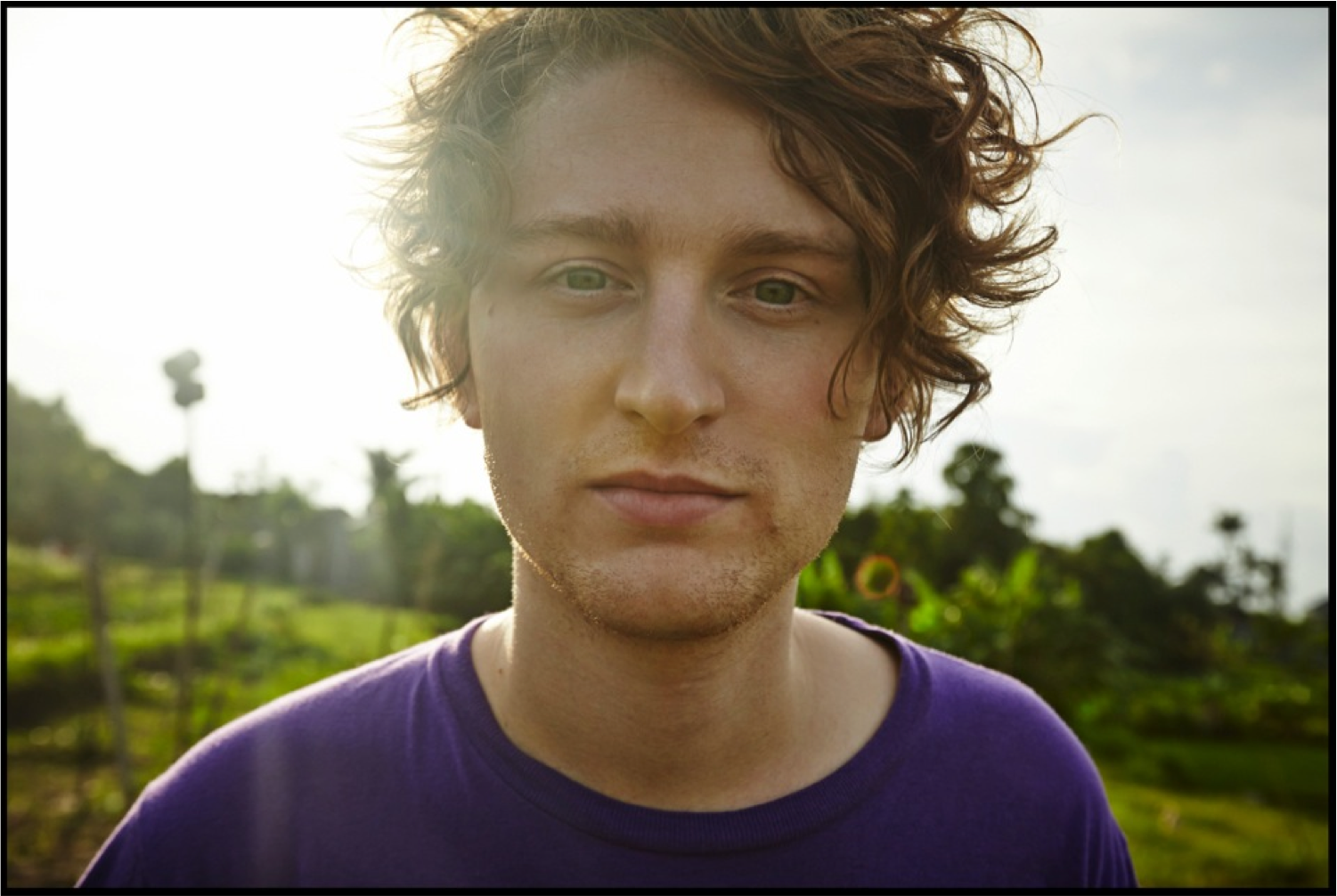 King of the Audio/Visual show and local Brisbane beatsmith Sampology has been steadily making a name for himself with his incredible AV shows and impressive tracks for a while now. Full of collaborations and favouring tropical beats, Sampology’s latest efforts are ready to go and look set to make him a pretty busy man in the very near future! We caught up with him on Day 2 of BIGSOUND as he was preparing to unleash his latest efforts in a completely new live show, ahead of the release of his sophomore album.

How’s your BIGSOUND so far?

Good! It’s been really good! I checked out a bunch of stuff last night!

Yeah, that was unreal!

It was awesome! I was standing next to the lighting guy, and just watching him.

I saw him too! It was crazy!

Totally! At first I thought they were just on midi-syncs and stuff because it was so nicely programmed, but then I looked and saw him playing around with everything. He was like one of the musicians! I just wanted to give him a hug at the end!  But yeah it was great – building and emotional and I was really just impressed by the whole programming and sound. Who else did I see? Some homies; Paces, Indian Summer DJs, a bunch of stuff at the Future Classic stage.

Yeah, and it was always so packed there!

I like that venue! Between 18-21, that was where I saw a lot of really cool acts. Now I think it’s just a “nightclub” nightclub.

What does playing BIGSOUND mean to you? Do you have any expectations or goals?

Well for me, I’ve lived in Brisbane my whole life and I’ve come down to BIGSOUNDs over the years, but never actually played. It’s really good timing for me too, because it’s kind of kicking off the next album cycle. The first single from my next album comes out in about two weeks, and the show that I’m doing for my showcase is my new show that I’ve never done before. It’s me, Jordan Rakei – who is another Brisbane artist on keys and vocals, Tom Thum – who I’ve worked with for a long time and is in the show tonight, and Daniel Merriweather – he’s coming up from Melbourne to do Shine A Light. So yeah, it’s really cool! I’ve wanted to do BIGSOUND for a while, but now it’s even cooler because there’s a whole other reason to do it: to kick something off. A lot of people would know me for the visual show, and I’m still doing that stuff, but with this new live show, there is a visual component in it still. It’s cool to bring different elements from wearing different hats and bringing some cool aspects from my visual show, even though it’s a different style of visuals. I’m really excited by it! It’s a kind of new, unique show – I can’t wait to play tonight!

What made you decide to add the visual component, initially? Is that something you were always interested in and wanted to do?

This technology came out, and before that it was a little bit tricky. I was investigating how to do it, and the workflow wasn’t really the way I imagined I would be interested in. But then, this technology came out that allowed me to extend from the way I was DJing and work in the same way instead of having to balance between things. I think the overall thing that inspired me was when I saw the technology and what it could do, I started getting all these ideas like, “I could do this, and take that and flip it, and juxtapose this with this!” I got really excited by it.

When you’re creating your music, do you work simultaneously on the audio and the visual?

It’s cool doing the live show at the moment because it’s kind of defined my live show even more now. My AV show has a lot of juxtaposition. I’m really into that hip hop sensibility of taking something and flipping it and giving it new life, and that’s kind of what the AV show about. I’m using found footage combined with animations I made myself, but for the most part it’s flipping other people’s footage and “re-contextualising” it, I guess! The new live show though, has all original footage, and it ties in with the music and the art theme of the album. There is a very strong visual and colour scheme to the album. I’ve been working with my mum actually who’s an artist, on all of the visual content. The tour poster for BIGSOUND, and the stuff I’ve been posting on Instagram – I’ve been working with my mum on all of that. It’s really cool at the moment because I’m still doing the AV show, but now I’ve got the live show as well and that’s art of the album cycle. It’s cool because the two things are different, but they’re still an extension on what I’ve been doing. Sorry, I didn’t answer your original question at all!

That’s okay! Now, let’s talk about when you went to India!

There was a cool opportunity for me – this NH7 festival. It’s been running for a couple of years. There is this kind of rising middle class of India and it’s kid of tailored towards to new punters basically. There are about 5 stages and they all have different vibes, so I got asked to do that. I went over and played Delhi, Bangalore, Puna and Mumbai. The first day I found out I was going, I started researching record stores in India, and it took me a while. It’s quite complicated because there aren’t actually any “record store” record stores. It’s more kind of antique stores that have records. I did two record digs: one at an antique store in Bangalore, which was awesome. We walked around side streets and it took us ages to find it even though we had the address. I found some amazing stuff though! There’s a shot of me on a roof holding like 80 records. Then, in Mumbai it was even crazier. I got the number of this guy in an antique store and I was told to just call him up with my list of records, and he’d get on a bike and deliver it to the hotel, which he did.

Yeah! But he brought his son, a portable turntable and another huge stack of records to listen to. The day I got into Mumbai, from 10am until midnight, we all just hung out in my hotel room listening to records. I’ve been a fan of Indian soundtracks and all the producers behind that for quite a long time, just as geeky music that I’m into, so I was hitting him up about all this stuff like, “Who’s your favourite soundtrack producer? Do you like current stuff?” I worked in a record store, Butter Beats, for four years, so I understand all shapes and sizes of record geeks. It was funny because there were so many different parallels between Australian record geeks and this guy. I asked him, “Do you like current Bollywood?” and he replied saying, “No! 1984 is the cut off period. Before that it was good!” That is such a record geek thing to say, so that was pretty funny. But yeah, I did heaps of stuff there! It was the first time I had been, and I want to go back!

How do you think crowds over there respond to your shows and your music as opposed to back home?

I think, because I was playing the visual show then, for me; anywhere I go that is the first time I play there, and the first time they would have seen that kind of show, it’s awesome because it’s a completely new experience. That’s how it went over there, and it was great! The response was really good and I’ve still got people hitting me up asking me to come back, which is kind of cool. I think, in general, India isn’t like Australia where we’ve been spoilt for years and years with heaps of acts coming through. For them, they haven’t had that so it’s a new type of appreciation.

Yeah! I had a lot of people coming up saying, “Thanks for coming and playing for us!” and I just have to be like, “oh you know, no worries! I’m glad to be here!” It’s very much like that; the crowds are awesome.

With your album, you have a few collaborations on there (Daniel Merriweather, Jordan Rakei, Tom Thum) – anyone else?

I’ve been working with Hannah Macklin as well. We’ve done stuff before. At the moment, there is definitely a next wave of Brissy soul artists.

That could be a new sub-genre or something!

Definitely! Down to 4105 postcode; 4105 soul! But that kind of happened naturally and I got kind of half way through making tracks and I realised that I was working with a lot of local people. Dan’s from Melbourne, so still Aussie. There’s definitely a kind of carnival/tropical theme on the album, but with the soul edge as well. There’s a lot of synth and weird sounds too, but I’m definitely feeling the carnival-y, tropical vibes at the moment. It’s melding between the two with the soul people.

Does your creative process differ much when working on your own as opposed to with someone else? Do you prefer one or the other?

I think I prefer working with myself to come up with stuff. It takes a long time, because I’m trying to come up with something that doesn’t actually exist yet. I’m trying to find something that’s slightly different. I might not get there but that’s the aim of it. I work well late at night; I get to the point where my brain just turns off and I just find something and go with that, and the next day I’ll hit Hannah or Jordan up and they’ll come over and we’ll work on stuff. For me, having someone else in the room creates a bit of urgency, because they’re only going to be there for a set amount of time. You need to get something done so you don’t feel like you wasted your time whereas if you’re by yourself, you’ve got all the time in the world sometimes.

Are you the type of person to sit there until it’s done, and smash it out, or do you take a bit of time and come back to it?

Both, I think. I like to take a lot of time crafting the actual sounds.

Has this album been a long time coming?

Yeah… There’s a track I did about a year and a half ago, but I’ve changed the beat since then. It’s probably been coming for a year and a half, but that’s like ideas from back then, but maybe six months ago I picked out the ones that made sense and went with those ones. I like taking time. I will lay down a sample, like a clap, then go through and layer my own claps and record that all the way through. All the tracks on the album will have the same claps all the way through to give it more of an organic feel, and there is a lot more of that kind of sound.

One more question – what’s next after BIGSOUND?

Well, November is the visual tour around the new single, Shine A Light. Then, early next year I’ll be touring the live show that I’m performing tonight!