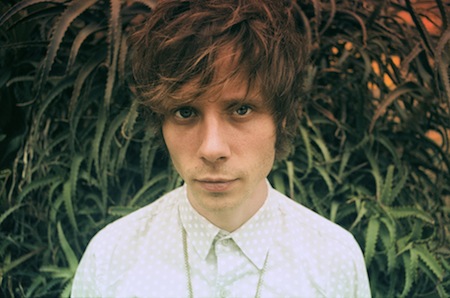 The always unpredictably brilliant Pluto Jonze has released a new video clip for his single Sucker. The song itself is one of his best. Considering how random his sound can be, and the enormity of variation between his songs, this classifies as one of his most reserved – and yet it works.

The psychedelic video fits the tune. With the band assembled in front of a white canvas background, you could be forgiven for thinking you were looking at an art exhibition for the first few seconds. Yet once the first of the heavy guitar riffs can be heard, Pluto Jonze’s face is awash with an inky deep purple. By the minute mark, the band is positively drenched in the visual representation of the 90s. Mixed in are copious images of intense close up shots of a woman pouring wine and eating chocolate – with infuses some emotion that reflects his melancholy appearance throughout.

It marks almost the end of their wildly successful national tour with Ball Park Music, garnering new fans with their impulsive antics. He will surely gain some more with what I would consider one of his best songs, with an aptly made music video.