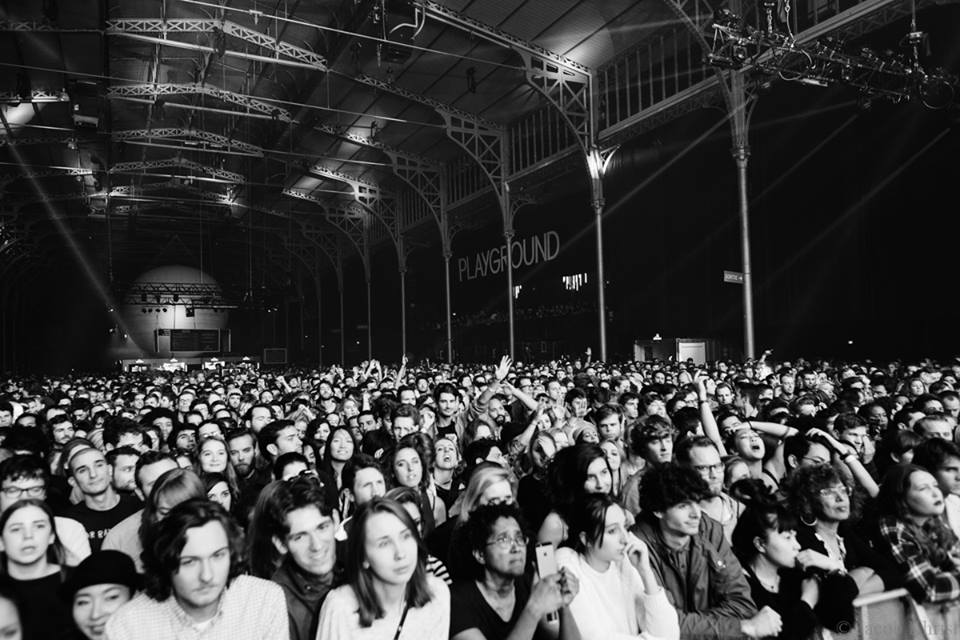 Sadly, the word pitchfork is no longer synonymous with the farm tool of old. Nowadays, depending on who you talk to, it’s either a finger on the pulse tool for discovering some new tunes, or the writings of a bunch of pretentious tools. Pitchfork have divided music-lovers’ opinions for years, but whether you love them or hate them, one thing’s for sure: they put on a damn good festival.

I could rave on for days about my experiences with every act, but it would probably be more interesting talking about what I had for breakfast each day so I’ll stick to a few personal favourites and some acts that are heading down to Australia for some festivals pretty soon.

Pitchfork absolutely killed it in the location design department. The venue consisted of two stages at either end of a hall, so an act could perform their sound check on one stage while everyone was up the other end, ensuring there was no down time between each performance, and better than that, no clashes either. This combination led to a back to back four hour block of consisting of a handful of some of my all-time favourite artists in The War on Drugs, Mogwai, Jon Hopkins and James Blake. Mogwai are a band I’ve been trying to see for years and years, and I finally got my chance. They are clearly still flying the flag for post rock, releasing album after album and playing show after show of raw, driving epics that just knock you out. The whole crowd was floored by their intensity, mixing old classics such as ‘Mogwai Fear Satan’ and ‘I’m Jim Morrison, I’m Dead’ with new tunes from their 2014 album Rave Tapes. Their final number, ‘We’re No Here’, balls to the wall deafened half the crowd and I know I wasn’t the only one that was left pretty much speechless. This is a band you’ll remember seeing for a lifetime.

Next came Jon Hopkins, who’s on his way to Australia in January for Laneway, and if you take one thing out of this whole review, it should be to go see this mastermind at work. His visual show combines with his visceral electronica to create something that’s truly special. Unbelievable. Worth the entire entry cost to Laneway on his own in my opinion. James Blake rounded off a pretty perfect evening as he simultaneously made half a crowd of straight men question their sexuality for about an hour or so, as usual.

The night then kicked on to the after party held at a nearby club with a much smaller capacity, but was worth paying the extra fee for as house stalwarts Joy Orbison and Martyn kept the dedicated diehards going until 6am.

Feeling a bit under the weather, day two saw a late return to the festival to catch the mega-hyped Future Islands. If I thought it couldn’t get any better than seeing these legends in action, I was wrong. Standing there on the stage, in all their glory, were the band members decked out in full Halloween kit, with front man and dance god Samuel T. Herring rocking the vampire cape and bassist William Cashion looking like he came straight outta Oz with his witch threads. They then proceeded to actually play some music, too, and to save some time I’m just going to say believe the hype. Laneway. See ‘em.

Then the problem of having one stage suddenly surfaced and deflated my bubble a little bit. Don’t get me wrong, I think Mø, CHVRCHES and St. Vincent are extremely talented musicians, but they’re just not my cup of tea. You know what they say, every silver lining has a cloud, and there it was. It was amazing having no clashes, but at the same time you weren’t offered any real alternative to the one act that was playing, and that left you in a lot of cases with a crowd that was partially indifferent to the artist. Not wanting to be the people who stand motionless in the crowd that I’m always silently disappointed by, we proceeded to check out the last, desperate resort of any festival goer, the silent disco, and then watched some dudes play Pong for two hours. A Tee-Pee forest set-up a la Splendour would have worked wonders here.

After this thrilling development, we continued on to after party number two, which had a killer line-up consisting of Tourist, trap mastermind Lunice and up and comer SOPHIE. Lunice was an absolute madman, turning the crowd in to a sweaty blender and even throwing some tunes from TNGHT, his collaboration with Hudson Mohawke, into the mix. Tourist was a nightmare for epileptics with his incredible light show and silky smooth production, and SOPHIE was just dirty in the best sense of the word. Both are going to be down under in the next couple of months, the former for Beyond the Valley and Lost Paradise, while the latter will be on his own headline tour, so start preparing your bodies now.

Fuelling ourselves up for the final push with some hard earned baguettes, we shoved some flasks down our crotches and headed in. First up we caught Movement, representing Australia, and they pretty much melted the crowd like a Golden Gaytime on a hot summer’s day. Doesn’t get much more Australian than that. Foxygen then turned the heat up with their 70s inspired cosmic journey through time and space, with front man Sam France emulating a mix of Mick Jagger, Jim Morrison and David Bowie. After a couple of hours of chilling out to great sets by Tune-Yards and Jose Gonzalez, the previously anonymous entity that is Jungle blessed the stage with their presence. They banged out hit after hit from their new album and the crowd were just loving every minute of it, bouncing along every step of the way. These guys have some serious talent.

Next up came a man that has recently released Our Love, what I believe to be one of the greatest electronic albums of 2014, if not ever, and who needs no introduction. Dan Snaith, aka Caribou, played an absolutely legendary set mixing the old with the new, building it up and breaking it down, giving a master class in electronic music played with a live band. Balloons were falling from the ceiling, and tunes like ‘Our Love’, ‘Odessa’ and ‘Can’t Do Without You’ were whipping onlookers in to a frenzy before he finished with a ten minute rendition of ‘Sun’. I’ve said it before and I’ll say it again: Caribou is a no questions asked must see at Laneway.

Four Tet followed, showing everyone why he is the immensely respected figure he has become in IDM today. His set was minimalist, jungle, tribal, house and garage all at the same time, and just because it’s Four Tet it worked. Jamie XX was next on the agenda at 2:30am and I’ve got to say that he is the best DJ I have ever seen play. He seamlessly mixed everything you’d ever want to hear, from his own sumptuous tunes to The XX remixes, all the way up to some funk that would’ve been right at home in a Nile Rodgers gig. Everyone was mesmerised and almost hypnotised by this tour de force and I feel sorry for anyone who had headed home at this point. To add the icing on top of the cake, there was who else but Kaytranada. That man knows how to spin. He didn’t give a shit how tired anyone was and let loose, giving the people what they wanted: one last chance to go mental before going back to our menial jobs and studies. And then, just like that, it was over. For me, those 7 hours of Jungle, Caribou, Four Tet, Jamie XX and Kaytranada will go down as one of my greatest ever festival experiences.

Now here’s the bit where I guess you’ll be expecting a witty decimal point review out of ten to complete the Pitchfork theme, but I’m going to have to disappoint you there. Comparing festivals to each other can be hazardous as they can be so wildly different. Obviously there was nowhere near the atmosphere and sense of community of a normal three day camping festival, but in terms of the pure music on offer, Pitchfork has got me hooked.