2010 is set to be the year of the follow ups. While 2009 was awash with incredible debut releases and breakthroughs, from the likes of Passion Pit, La Roux and Grizzly Bear, this year is set to be dominated by the follow up’s. Over the past week LCD Soundsystem and Klaxons have announced the completion of their highly anticipated forthcoming albums, while a host of other big names are also fresh out of the studio. With the logical progression toward online distribution, the rise to prominence of home producers and the ever increasing influence of experimental-indie over the mainstream, twenty-ten will be all about smashing down the boundaries. However some of the genre-shaping big names from the past decade are looking to stamp their ever increasing influence on the next ten years. 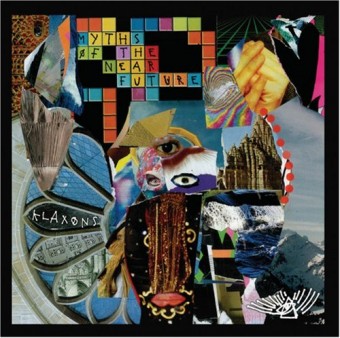 2007’s Mercury prize winning debut, Myths Of The Near Future, was always going to be tough to follow. Despite being fervently refuted by the band, the critically acclaimed Myths was seen as the shining beacon atop the NME dubbed ‘new rave’ movement. A stunning release which, highlighted by tracks Golden Skans, Atlantis to Interzone and Gravity’s Rainbow, effortlessly carved it’s own niche in the musical landscape. Futuristic themes and sci-fi inspired lyrics transported listeners to far off galaxy’s, quite literally from the mythical city of Atlantis to the page’s of William S. Burroughs Interzone, all the while forming a vivid and inspiring representation of the near future.

“We’d really like to put out the first great record of the 2010’s rather than the last great one of this decade. Now that’s become an aspiration and a goal.”

After nearly four years, Klaxons are due to release their highly anticipated follow up. The title is yet to be revealed, however a portion of the probable tracks have been demoed at a host of live shows. With titles such as ‘Moonhead’, ‘Imaginary Pleasures’, ‘In Silver Forest’ and ‘Valley Of The Calm Trees’, Klaxons look set to continue on their journey through time and space. However, a significant period of time has passed since Myths, prompting one to wonder how the band’s sound will have evolved.

After falling out with producer, James Ford (Simian Mobile Disco), Klaxons switched to producer Ross Robinson (Korn, At The Drive-In). The change of producer might seem like a strange move, however according to frontman Jamie Reynolds the focus of the new album was, “to inspire young people to want to pick up a guitar again.”

One thing is for certain, Klaxons won’t be standing still when the album finally sees light. Expect 70’s synths, heavy guitars, shamanism and a little more preaching about the year 2012.

The release of LCD’s forthcoming album will be a bittersweet moment. While it will undoubtedly provide fans with a swathe of anthems, it also potentially signifies the end of James Murphy’s much vaunted project. But don’t despair just yet, Murphy will no doubt re-invent himself under a new pseudonym, once again re-shaping the genre and forging the path for others to follow.

The critically acclaimed Sound of Silver was a masterpiece. A pulsating, emotional journey. The highs are as amazing as the lows are devastating, all the while being bound together by Murphy’s ponderous questions and insightful statements. Despite his profound lyrics, Murphy has remained tight lipped about LCD’s third album. “I write all my music in my head, I never demo”, Murphy revealed to NME.com, “When I start recording I don’t tell anyone not even my manager”.

Throughout recording, however, Murphy created a three part vlog filmed in their ‘makeshift’ recording studio, dubbed ‘The Manshun’. Fittingly, the studio happened to be housed in a mansion.

James Murphy has confirmed that the third LCD Soundsystem album is due to be released on May 17 in the UK through DFA/Parlophone.

Backing up their global smash hit debut album, Oracular Spectacular, is going to be a big ask. The album sold in excess of 1 million copies worldwide, was nominated for a BRIT award as best international album and sat atop the list of NME’s best of 2008. It certainly was a meteoric rise for the duo. Funnily enough, two of the biggest hits from the album both featured on the 2005 Time To Pretend EP. Little did Ben Goldwasser and Andrew VanWyngarden know, their time to pretend would soon become a reality.

From all accounts, Congratulations sounds like it will be a continued musical exploration for the pair. Influenced by the likes of Lady Gaga and Kanye West, front-man VanWyngarden stated on Spin.com, “There’s one song called ‘Siberian Breaks’, and it’s about 12 minutes long. It’s kind of like eight different songs strung together into one, and the general theme is about surfing in the Arctic Circle by Russia.”

After hearing the first release from the new album titled Flash Delirium, it’s unusual to hear the band stray so far from a sound which was so well received. The track seems to have divided opinion amongst fans, however in a recent interview with spinner.com, MGMT went as far as publicly apologizing for the track.

“When we first wrote that song, we were laughing so hard […]Andrew [VanWyngarden] just reminded me of that, that we thought it was the funniest thing we’d ever heard. And then we got used to it, it started to sound more normal. It’s not a single, but we thought it was a good way to entice people to listen to the whole record. I’m sure there are plenty of people who think it’s completely weird and not what they were expecting […] I’m sorry […] We’re trying to come to grips with that world. It’s not our world. We don’t feel comfortable in it. But we didn’t want to make that typical second album either, about fame. So we’re definitely observing it, as opposed to revelling in it.”

TPC are set to release their second full length album, entitled Champ on the 11th of May, 2010. A full two years have passed since the riveting Elephant Shell, and four since the explosive debut EP A Lesson In Crime, which sold in excess of 40,000 copies.

“We’ve broken the half-hour mark, we’re going to have to build up our endurance.”

Speaking to the Vancouver Sun recently, drummer Greg Alsop reflected on the new album. “It’s a lot more confident, the songs are a bit longer,” Alsop said. “I think we’re pushing over the three-minute mark on most of them. Elephant Shell was written in this headspace where the EP was getting some attention and we felt we had to live up to it. This one felt like the four of us writing in a room together again, where we didn’t have anything riding on it. So hopefully it sounds liberating that way.”

The rapid fire succession of hits on Elephant Shell meant the album fell just shy of the half hour mark. In response, Alsop jokingly rebuked, “We’ve broken the half-hour mark, we’re going to have to build up our endurance.”

The length of the album isn’t the only change for the band. The new sound will be more guitar oriented, with End of a Spark and Gone the main proponents.

With a new album comes a new sound; essentially a new Foals. 2008’s Antidotes was a highlight amongst the UK indie soundscape. Now it seems, two years on, their sophomore album will once again reshape their unique sound. One thing which won’t change, however, is Yannis Philippakis’ cryptic, intriguing lyrics. Spanish Sahara, the first track from Total Life Forever, instantly draws you in to Yannis’ world. It harnesses the repetitiveness of ‘Hummer’ and ‘Cassius’ throughout the chorus, while toning down the hyperactivity in a similar vein to ‘Olympic Ariways’. The track sublimely builds to a stand-out chorus. Is this the foals we’ve all been waiting for?

“definitely the darkest stuff, and the slowest stuff”

As NME suggested in reference to Antidotes, Foals seemed to alert everyone to their potential but didn’t fulfill it, making “a really good album but not a great one”. All signs seem to indicate that Total Life Forever will be the great album we all knew Foals had in them.

Recorded in Sweden at the Svenska Gramofon, Total Life Forever will have more of a progressive rock sound. Yannis also confirmed that the new tracks are “definitely the darkest stuff, and the slowest stuff” the band has recorded to date. Perhaps this is also in part due to their new producer Luke Smith, after moving on from Antidotes co-producer Dave Sitek (TV on the Radio).

The new album will be released on May 10.

Part Two will be coming in the not too distant future. What other albums are you looking forward to in 2010?