The time had finally come. The sun was warm, the moon was cool, mid-semesters were all but over and I was clutching my print out pass to see (and hear) indie rock royalty. As I entered the velvet fortress that is Brisbane’s Tivoli the key word was ANTICIPATION. The floor, the halls, and the walls were a wash with leather-clad buzz. 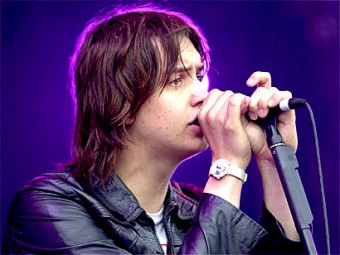 Julian Casalbancas took to the microphone at a quarter to ten and crooned his way through the eclectic debut album Phrazes for the Young and more. His energy and presence were captivating- resonating between an aimless wander and what can only be described as the most inspiring power stance in modern music.

To a drunken cry of “Boombox!”, in reference to his collaboration with Andy Samberg’s Lonely Island, Julian laughed, “that man is going to leave here disappointed!” before bursting into the chorus. It was moments like this that really summed up the atmosphere in the performance. Casablancas was completely in the moment which ironically saw no one leave with sullen expectations.

My highlight of the set was his ‘cover’ of The Strokes b-side I’ll Try Anything Once (You Only Live Once). The stripped down version comes with only the notes from a keyboard and showcased Julian’s soulfilled vocals and ear for melody. Anyone with a Splendour in the Grass ticket should be shaking in their boots.

30 Minute Boyfriend?
Ludlow St
River of Breaklights
Hard to Explain (The Strokes)
Glass
11th Dimension
Left & Right in the Dark
I’ll Try Anything Once (The Strokes)
I WIsh It Was Chistmas Today
The Modern Age (The Strokes)
Out of the Blue

Encore:
4 Chords of the Apocalypse