As announced by lead singer/guitarist Dean McGrath on triple j, Hungry Kids of Hungary will hit the road in August, embarking on a pre-album release warm-up. The band has been jet-setting around the world, touring extensively across America and the UK playing at famed venues such as The Viper Room in Los Angeles, the Mercury Lounge in NYC, the Borderline in London and the Camden Barfly.

The tour will also mark the début of Wrist Watch on Australian shores, after receiving significant air time on the J’s. After their last sold out show at the Zoo, this tour will begin at that venue. It’s set to be an awesome night and will sell out quickly so be sure to claim your ticket ASAP!

Hungry Kids’ debut album will be out in September. 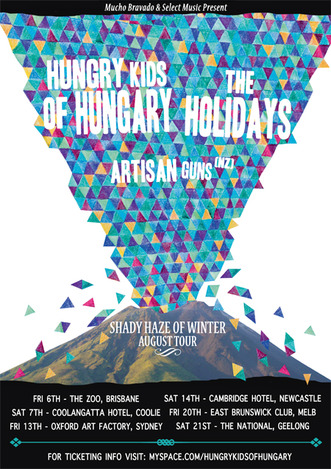 SAT, AUG 14 – CAMBRIDGE HOTEL, NEWCASTLE
Tickets available from www.moshtix.com.au (1300.GET.TIX) or Moshtix Outlets and over the bar at Cambridge Hotel.