After a tour of Australia in September to release their latest album, Alice by the Moon, The Checks are again crossing the lake from the Land of the Long White Cloud to the land of… oversized hats and Ray-bans? Lead singer Ed Knowles explains to Eleanor Houghton his memories of Down Under, and discusses a potential exchange program for a bit of sunshine. 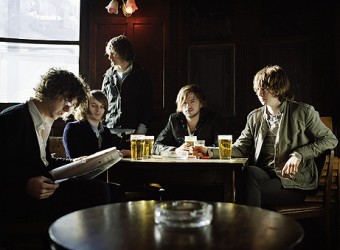 When a band is listed as having toured with industry big-wigs such as ACDC, Muse and Oasis, and has a fan-base that includes R.E.M.’s Michael Stipe and Noel Gallagher, you expect that you are about to deal with a some sort of musical veterans. These self proclaimed ‘five best friends’ from New Zealand are, however, still only breaking the surface of the indie rock scene. And by breaking the surface, I mean exploding the shit out of it with their heady mix of highly charged rock tunes that already rival the sounds of more experienced rockers. They’ve come a long way from hijacking school lessons for band time.

“We had this class called Music Performance, which we’d basically just use for band practise.” But unlike some slightly exaggerated claims on their website, the boys had no need to skip detentions at Takapuna Grammar School on Auckland’s north shore. “There were never any detentions, I’m not sure where that came from…” But not to ruin their rock and roll image, Knowles is quick to assure that they are still a bunch of rebels. “Yes!! Absolutely!” he says with a laugh, “But at the time we were really just trying to get our driver’s licenses… and get our guitars in tune.” 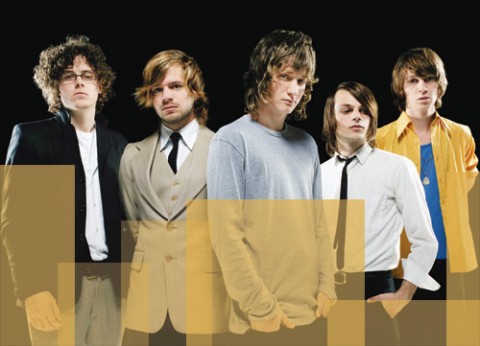 Even when on the road with notorious rock-brats Oasis, after Noel Gallagher begged them to open for them, or touring New Zealand with uber-legends ACDC, they didn’t feel the need to trash hotel rooms or abuse each other on stage to keep up with the big kids. “We were so young, only 16 or 17 at that stage, so we never really thought of trying to live up to them. It was really just us thinking ‘Fuck, I hope I don’t faint’”.

To say The Checks hit early success is a bit of an understatement. When most bands are stuck in their garages, worrying about acne and whether or not their voices will break mid-chorus, these young Kiwis were being picked up by NME magazine and toured around the UK as fresh meat. Surviving this, moves to London were organised, and record deals were signed. While that ink was still fresh, after only one year of playing gigs and the release of one lonely single, they won the 2005 New Zealand Music Award for Breakthrough Act.

In October this year, they found themselves being recognised by their homeland once again, this time winning the Best Rock Album at the same awards. Just after winning the award Knowles commented that “now we just want to do what a ‘best artist’ does with our new album”, so do they feel like they’ve successfully made the jump from ‘newest’ to ‘best’ with their latest release? “Yeah, I think we did what a best band would do in that we did exactly what we wanted to do.” He goes on to explain that this album is a result of the band doing what they really love with music. “We didn’t organise it too much or make it too perfect, all the songs are different from each other,” the album wasn’t made with pleasing the masses in mind or making something just to be marketable. Having success early on has allowed The Checks to stick to their own guns, rather than falling into the cookie-cutter moulds many bands find themselves in when trying to please the bosses. So how is their album best taken? “I think it’s best listened to at around 11 at night. Or driving cars, it seems to be good for that, driving fast,” he says with a nervous laugh, “through the country.”

On top of this, the boys haven’t been snatched up by the pretentious monster, saying that they have instead learnt to appreciate New Zealand as a musical influence more since living over in London for 18 months. “Probably [appreciate New Zealand’s influence] more now than before. I think at first we were more interested in what was happening overseas, but since coming back we… understand more what New Zealand is musically.”
That’s not to say they aren’t influenced by your common or garden musical great. “Personally, Van Morrison, Bob Dylan, John Lennon. And Foals. I loved their first album, and their second album.” A little more on the surprising side, Ed went on to list rap as a strong influence. “I think that rap is almost more ‘rock’ than rock and roll at times,” before going to reveal the guilty pleasure the band has of listening to “The Black Album by Jay-Z, you can probably hear it in the background now…”

The Checks will soon be hitting the road, or more appropriately, airways, heading back across the Coral Sea to our shores in the first few days of summer. Obviously we can’t have made too bad an impression last time they were here, with such a hasty return. But were there any stand out Only-In-Australia moments that come to mind? “Well there was the heat, we loved it! It’s so different to our weather. But the people, they all wear those broad-brimmed hats! And everyone wears Ray-Bans, and everyone always looked like they were some amazing artist or poet.” According to Knowles they have enough stories from the road to fill a book now, after having actually been doing this for about nine years all up. Before they go testing their literary skills though, they plan on heading back into the studio and looking towards a new album. Not that you’d exactly call them tortured workaholics. “There is lots of hard work, practising and recording and all. But ultimately we’re just five best friends, so it’s never felt too much like hard work.”

We in Australia have a bit of a habit of claiming successful Kiwis as our own, would they mind if they became our next victim? “I find it so funny the way you do that! Even though you know they’re not from Australia! But I guess if we can visit and borrow some of the weather for a while that might be okay.” An exchange program? Our sun for their passports? “Yeah, that could be good.” We have it in writing, people – they’re ours.

You can check out The Checks on Friday December 3rd at MUM @ World Bar, Kings Cross, Sydney, or Saturday December 4th at Pony, Melbourne CBD.

4 responses to “The Checks, mate: Interview”