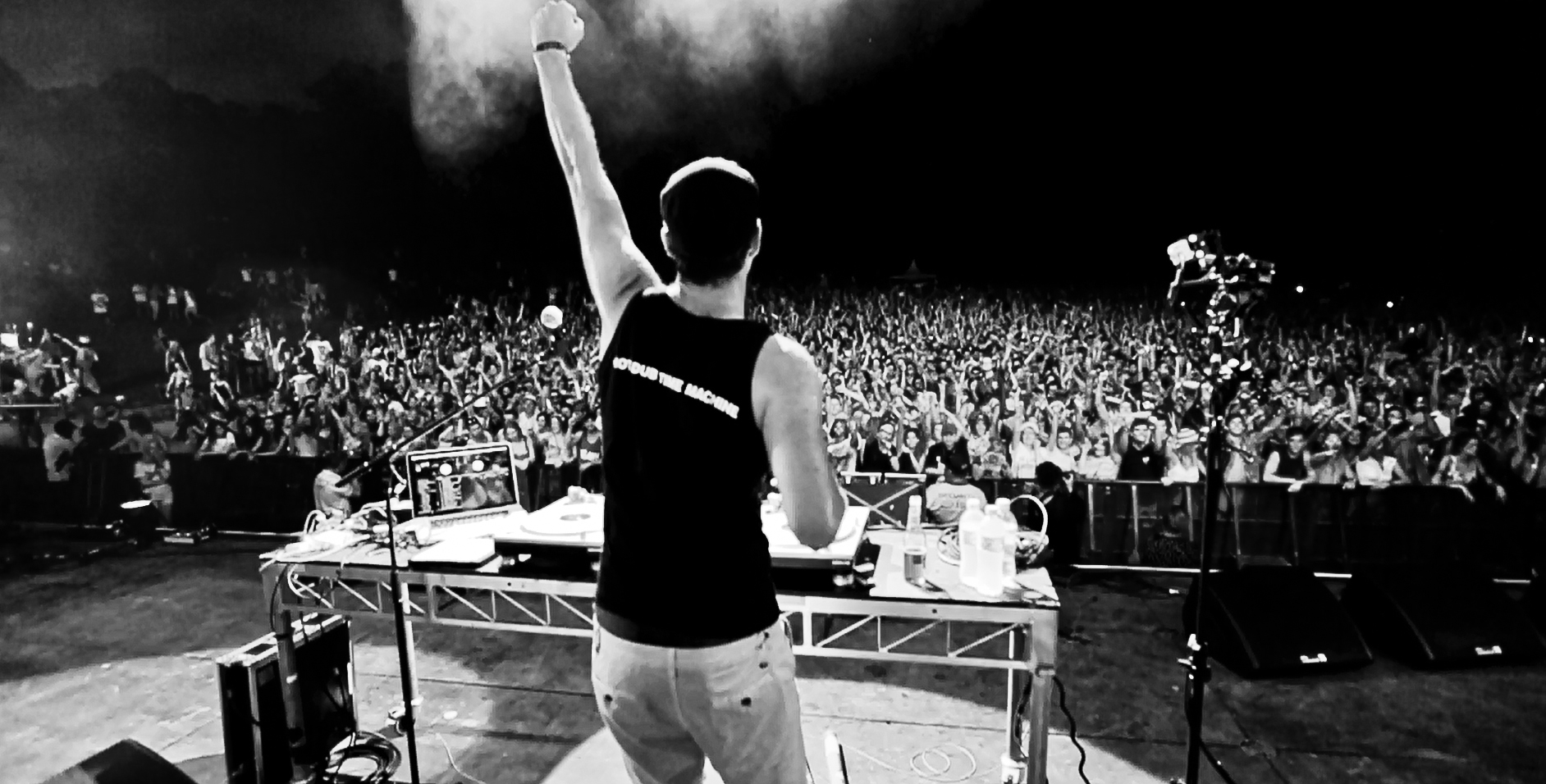 What happens when you take all the best hits of the past from early rock ‘n’ roll, 70’s disco, though to the cheesiness of the 80’s, 90’s, all the way up to now?

Must be some kind of….Hot Dub Time Machine.

Which is exactly what DJ Tom Loud, pilot of the ‘World’s First Time Travelling Dance Party’ does. Mixing up both audio and visual of the best party tunes from the past 50 or so years though a strict chronological order though the power of good vibes and Hot Dub.

Since 2011 he’s been travelling around the world with his time-and-genre bending party, and this year sees his very own headline tour performing around Australia.

How did you first get started doing Hot Dub Time Machine shows?

I’ve been DJing for a very long time, since 2000, and I was just DJing in my bedroom like 90% of DJs that do occasional gigs and all that kind of work. But then I got an odd niche in the comedy scene, I started DJing at comedy shows and those kinds of events. I started getting booked at after parties, and I really enjoyed that you can play any song you want at those parties and it goes off. It’s really random and fun and loose, and I got addicted to that. I wanted to make my own shows that I could take and tour around those kinds of festivals like the Edinburgh Fringe and the Melbourne Comedy Festival. There’s not many DJs that do that kind of thing, that have a story behind the show. So I did that for a while, and now I’ve started to get out of those fringe festivals and get out play at nightclubs where I would have never gotten to play when I was just a normal DJ, it’s wonderful.

Yeah the show has taken you overseas and all across the country, what would you say has been the highlight so far?

I think Falls Festival, that was the first big outdoor I’ve ever done. That was pretty special, yeah I think that’s been the highlight so far. There something amazing about Falls. I was totally unprepared, I thought ‘oh it’s just another gig’ but then walked out and then you realise that this is a festival-festival, so people are going crazy. People wearing outfits, they’re crowdsurfing, there are girls wearing next to nothing on shoulders, all that sort of stuff and to see all that on stage was just awesome.

You mentioned that you’ve were unprepared for that gig – how do you prepare for your shows, do you have a prearranged setlist or do you make it up on the fly?

It’s a bit of both. There’s a lot of preparation that goes into it before the gig, there’s a cabin attendant called Lou Lou Loud who appears on the screen, custom videos that go with the show and the song. Each song that gets played we make a video for, which gets played at the same time as the audio does – so that takes a lot of preparation. And getting ready for a gig, I’ve got about 6 hours worth of material so I just sit there and think how old or young the crowd is going to be, have a look at the crowd and see what will work and what doesn’t. There’s a bit of freestyle but there’s a certain amount of songs that I always play. I’m always going to play Smells Like Teen Spirit, I’m always going to play The Rolling Stones and The Beatles. When you’re doing a chronology of pop music, there’s some stuff you’ve got to play.

Has there ever been a time where you’ve played a song that’s just completely failed with the crowd and they haven’t gotten into it?

No, not so much, I kind of take it on myself to sell the song as well. If you’re a DJ and you play a song you love – and I only play songs that I love, and you can’t just go there and say “nah that was pretty shit.” You have to go “yeah, this is the best song ever” and dance and party, and make them believe that this is a great song, because it is a great song, otherwise I wouldn’t be playing it. There are times that I have played something that’s a little more obscure, something that I only like, but you generally look out into the crowd and connect with the other people who are digging it.

What’s your favourite song to drop that gets the people going?

It’s changing all the time because they’re all my favourite songs in there, but the cornerstone for a long time has been the early ‘90s where it goes – Smells Like Teen Spirit, Killing In The Name, and into Jump Around by House of Pain. It never fails to bring absolute bedlam, that’s probably the most fun to do. But at the moment I’m really enjoying playing is Zombie Nation, that 90s techno rave with the breakdown that everyone sings along to.

Would you say the ‘90s is your favourite musical era, or do you have another favourite?

Do you have any surprises in show on this upcoming tour?

Yes absolutely! I just finished a big run in Adelaide. There’s a whole lot of new stuff. There are some random music power-ups, there might be a lot more…um how can I say this without giving it away, there’s some super special spotlights on some particular Hot Dub artists and some extra time traveling adventures sitting there, just to take us on a tangent. I’m really excited for those.

10 minutes before starting a gig, what’s going on, what’s your mind set like?

Nervous, always slightly nervous. A lot of jumping and stretching. Hoping that it all works and god I hope when I put the fader up and put the record on the sound comes on and the microphone is on, that’s all I’m worried about. ‘Cause once it’s underway and technology all works it’s all ok, but in those first few minutes I’m just going ‘yeah…it’s gonna work’. It always does, but it’s terrifying.

After a gig finishes, what do you like to do?

Drink? (laughs) I generally like to have a couple of beers with whoever’s around. I love going down and having a chat to any people that were in the front row. I really like to build a little community in the show, there are always great people you meet who are just rocking out, so I like to have a chat with them. Or just go back to my hotel and play Starcraft, ‘cause that’s the sort of rock and roll life I lead.

Hot Dub Time Machine is a relatively newish project, were you surprised that so many people have gotten on board with the whole concept?

Yeah it’s fantastic. I performed at the Adelaide Fringe, that’s where it all started from, so I’ve done a lot of shows down there. We did 11 shows, and last year we did nine, and before that we did eight so that’s almost like 30 shows? Feel free to kick me on my maths (laughs), butI keep going, ‘Aren’t you guys sick of me yet?’ but they love it. I think Hot Dub Time Machine is a rollercoaster that you get on, enjoy it, and you get off. And it’s constantly evolving and changing so a number of people who have seen a number of times really appreciate that they can come along and still have an awesome experience. I’m not going to completely re-write it, but there are bits in there that make are new and really cool.