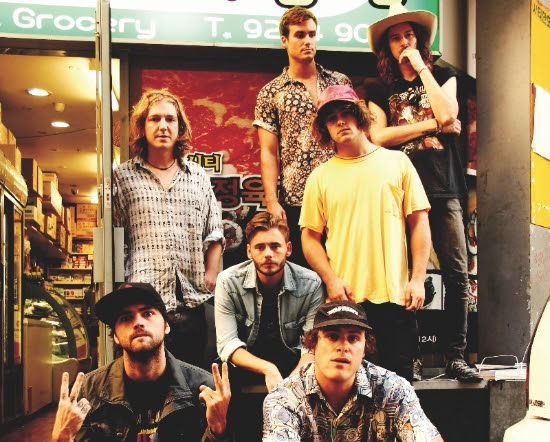 Little Bastard, the seven-piece punk-folk-party band out of Sydney’s inner west named made a name for themselves as a wildly fun, rowdy live band, and they’ve just dropped an incredible debut album with outstanding reviews.

Named after the supposedly-cursed Porsche Spider 550 owned by James Dean (and the car he died in) Little Bastard are about to storm stages across the country as they embark on a 13-date tour spanning almost the whole country.

We had a chat with bassist Daniel D’Arcy about getting loose at festivals, recording their album and never actually rehearsing.

You’ve had a pretty crazy year. The last time we spoke was almost exactly a year ago.

Yeah, it has been a big year.

At the time, you were just in talks about getting signed and doing some demos for the album

Yeah that was a while ago hey!

What have some of your highlights been so far?

The festivals. Falls Festival (Lorne) was awesome, that was just absolutely wild, everyone was getting so loose, and all the other bands were so sick. Festivals are definitely one of my favourite things, we’re a festival vibe type band.

Do you prefer festivals to gigs?

I do personally, it’s so much more exciting. A lot of the time you’re out in the country, you go on a road trip, just get heaps loose. Shows are cool, but outdoor festivals with everyone getting loose are the best.

Another highlight is just having the album as a finished product. It’s been a fair while in the making, and now that it’s all done it feels pretty accomplished .

It was pretty natural, because we’ve done so much touring and so many gigs. When we started out it was all kind of sloppy and loose, but the touring really straightened it all out. Relentless shows made us really tight as band. We did it in 8 days, we just went in, we were pretty pro about it. Just lay it down and got it done. We did the bare bones of the songs live and then layered on top of it. For a rowdy band, we all got pretty serious.

I remember you said that when you first started you would use your live shows as a rehearsal, you wouldn’t really play in between.

Haha, yeah we still do it that way. We’ve done a few rehearsals, but only when we nee to, like if we’ve got a tour coming up.

Considering you’ve become known as such a rowdy live band, were you worried at all about how the album would be received?

A little bit, I guess. The album’s definitely not as chaotic as the live show, but it’s kinda cool to split the band. Like, yes we get crazy when it’s live, but we also go and make a polished album. Some people have mentioned in reviews that the album didn’t capture the live show, but we weren’t all pissed and partying in the studio.

It’s not a live show, it doesn’t have to be the same.

Yeah, I mean all the songs are there but yeah. I don’t think we were worried, I think it’s better to separate it.

Do you have a favourite track off the album?

Umm, I can’t decide between Good Explosions and Bodies  in the Water. They’re high-energy, really drive-y, simple and raw. I really like the fiddle part in Bodies in the Water.

Last time we spoke you said that you guys were keen to stay acoustic because you loved the rawness and purity in that style of music, and that you’d decided against electric songs. Do you still think that way?

Well, nah. ON this tour and on the album we use drum kits and electric guitars now. The bare bones of the band is always gonna have that acoustic, blue-grass vibe, but like any band, we wanna change things up and evolve. We’re not gonna get too hectic, probably just an electric guitar and a drum kit, maybe some piano. On this tour we’re gonna have a drum kit for the first time. It’s cool, starting simple, twangy and raw, and slowly stepping it up.

Was it a hard decision, or just an organic move?

It’s pretty organic. Our mandolin player (Trevor Davies) is a really awesome electric guitarist, and he was that before a mandolin player. We’re not gonna go fully electric, we’ll just have one in there in the mix, to warm up the sound.

A lot of you were just picking up your instruments when Little Bastard started. Last year, you said that as you were getting better you thought you’d end up sounding more like traditional bluegrass.

Haha, we’re definitely not traditional. Bluegrass is a very pure style of music, it’s very ‘this is how it’s done’. We just play ‘em how we play ‘em I guess.

It’s interesting how much changes in one year!

Yeah, it’s true. We still try to write songs that are sort of bluegrass-y, and they definitely have the influence. I reckon purist bluegrass dudes would look at us and just be like, ‘what the fuck, it’s a fuckin’ joke’

Has the rowdy, party vibe of the band changed at all now that you’ve got a label and management behind you?

The shows are just getting better. When we go to Melbourne there are people there to actually see us. I reckon one of the reasons why people are digging it is because there were no expectations. We started as a party band, we just wanted to play at house parties and get fucked. It just meant to be a fun, weird sort of thing, and now it’s become it’s own thing. We still have the same party vibes, I think everyone understand not to take it so seriously. It’s just natural, that’s how it works.

Is there anywhere you’re really excited to play on the tour?

I really dig Mebourne, I love coming there to play. It’s probably the place we have the most people coming to our shows out of Sydney, and I just like Melbourne in general.

And we’re stopping in all these little towns and they’re always fun. People just appreciate it, y’know? When bands travel out and go to towns, the people come out and party. You meet lots of awesome people

Perth is really cool too. I’ve only been there once before, it’s cool to get to go out again.

Besides the touring is there anything else in store for the year?

Yeah, we’re gonna release some video clips soon and then I’m gonna co-direct/produce one for Desert Roller it’s gonna be set in this Mad Max-style desert wasteland, post-apocalyptic style. And then after that we’ll probably start getting new materials together for the next album. Hopefully we’ll get booked for some sick festivals come summertime.

What are some other Aussie bands you’re listening to at the moment?

Ummm Caitlin Park, I really like Courtney Barnett, she’s got sick songs. DMA’s are cool, there’s this band called These New South Whales, the seediest punk band, hilarious and really good musicians but also they just know how to put on an awesome show.