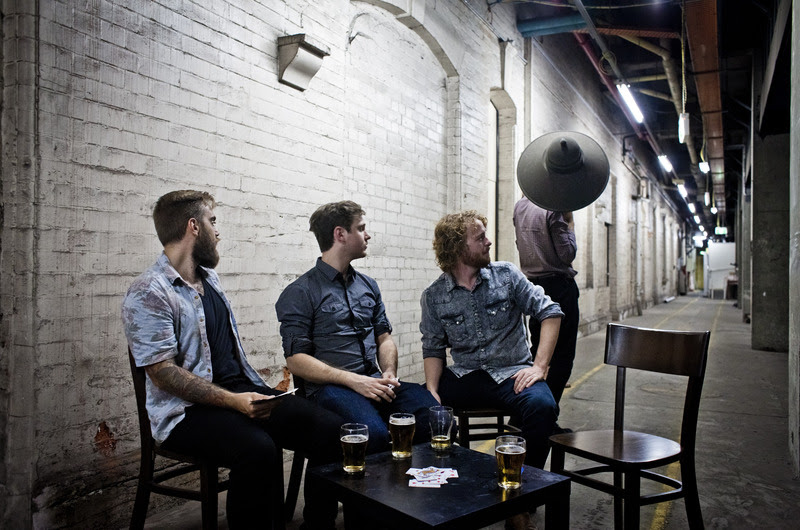 Bac·cha·nal – Catharsis, delirium, frenzy. However, you could listen to the Brisbane band by the same name, and reach that conclusion on your own. The Bacchanales are a force to be reckoned with; their meticulous songs, with thundering guitar and percussion, paired with soaring vocals, demand your attention – and they’re not going to give up until they get it. Their debut self-titled EP seamlessly crosses over genres and sub-genres, but is reassuringly confident and ambitious; much like the band members themselves.

Front man Jeremy Hunter knows what he’s doing – from touring the UK with Inland Sea, to his two solo tours, he’s begun to make a name for himself.

Tell me about the name – where does it come from? You were originally called something else, weren’t you?

We were called Jeremiah Hunter & The Preachermen, but that was too long. We spent ages trying to think of this new name because we obviously didn’t want the old one. The band was becoming more of a band and less of a solo thing, you know? It feels a bit weird saying it in front of people, and it being about you when everybody else is doing just as much.

So it’s not so much you and a backing band anymore?

Yeah, exactly. I didn’t want it to be me and them; I wanted it to be all of us because that’s the way it felt. The first tour we did was just as Jeremy Hunter, because that’s what I had released an EP under, and then the next tour we did was as Jeremiah Hunter & The Preachermen. That first one was May last year, and the second tour was in October last year. We spent ages trying to think of a new name, and we had all these ideas, but they all sucked. Every band name has been taken! It’s ridiculous! So we just kept going through names, and then I was watching Wolf of Wall Street, and in one of the crazier scenes, I think it’s like an orgy on a plane, and he’s like, “It was a true Bacchanal”, and I was like, “Yeah!”

A bacchanal is essentially just a riotous, crazy, debaucherous party. It’s based on this Roman God, Bacchus, who threw parties and they were named after him. Then I found out there were pieces of music called “bacchanales”, which is where you put the “e” on the end and it turns into a piece of music! So I thought that was pretty cool, and we just went with that.

Cool! So, with your EP, what is your creative process when you’re writing? Is it just you, or is it all the guys together?

A lot of the EP songs started right back when we started with the band with my solo stuff. Most of them, actually, were all there from the beginning and so we started working on those when it was a solo thing.

When it was just a solo project, were the other guys contributing to that?

Well, everyone had their input… And songs evolve when you play them with people. I love doing demos, and I kind of fall in love with the demos, but when you bring them to other people and they put their spin on things and their own style gets into it. Sometimes you have a little bit of resistance to this though, but it always turns out to be better then the first time you heard it.

Of course! Hearing it through different ears?

Yeah! You also get used to everybody’s style as well and it just kind of grows from there.

How did you come to choose “Why It Stopped Raining” as your debut single?

Um…. It’s just really kind of straightforward. That’s essentially it. I’m not an amazing single chooser… I don’t actually know what people look for… But I just thought that was the one that had, you know, the driving beat, the big chorus, and I just thought it might be the one that people would enjoy!

That’s cool! Now, tell me about the video. It’s too funny; I have even showed people at my work! It’s such a ridiculous film clip, even the costumes are nearly too much!

Have you ever seen “Major Payne”? It’s got Damon Wayans in it, and there is this one scene in it and everything is super bright, and he’s with the girls of his dreams. They’re in the front yard, laughing and everything is over the top. Then, this guy breaks in with a gun and they’re all still laughing about it. Paddy was just like, “We should do something like that!” And from that, somehow, I don’t know, we just got the idea about the puns… and it just continued on from that. We were actually going to dig a hole, and the guy was going to drive up in a car and dispose of this body, and a hand would still be in the car. But, we couldn’t actually find a place to dig a hole, and when we found this quarry, the ground was incredibly hard. We had to change the storyline on the day, and I… I end up killing him… When we were filming it I was like “Are you guys sure about this?! This is really violent!” But everyone was like “nah, it’s hilarious! Keep going!”

So obviously filming was heaps of fun!

Yes, so much fun! I’ve done a few other film clips, but this was so much fun by far! The amount of comedic moments that didn’t even make it in… There was a whole bit of me sitting on an expensive leather couch, and there was just this taxidermy stag head, with antlers and everything, and we’re all just drinking and I’m singing to the stag… There isn’t enough time in the song!

Well it certainly is a memorable clip. What do you think sets you apart from other Brisbane bands?

Our dance moves. Our in-sync moves*laughs*

I don’t think you really have to go to a specific locality anymore. If you have a song that works for people, then you get a reputation for your live act, and a reputation of, “These guys aren’t bullshit”. I think that’s what we focus on the most – just being authentic and trying to be as original as possible. I’ve got this philosophy at the moment that if you’re going to get anywhere in the music industry, you should probably get there for the right reasons. Aside from hype, and all that bullshit, you should focus your energy on making something that is so fucking good that people have no choice but to want to see you again, and to actually want to give you money for it. I just want to make songs that are really… I think it’s more about the performance for me. I want to play shows that are really intense and tight.

Well from what I’ve seen, you’re getting there! So, what IS next for you guys? Is a tour on the cards?

Um… I think touring is kind of pointless unless you have a fan base in the city that you go into. I think we’re just going to focus on playing shows in Brisbane.

Okay, and build your fan base here?

Yeah, essentially! That’s just it. I think we are also going to keep recording. We’ve got a few more songs up our sleeves…