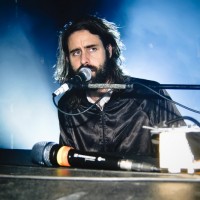 Today the frontman from Miike Snow has announced he’s releasing a solo album named Descender. The set date for release is the 15th of April, with the album featuring a raft of goodies for all. These include a 75 piece Czech Republic Philharmonic Orchestra, cameos from The Libertines guitarist, Anthony Rossomando, former member of Interpol, Brad Traux and John […]