What was meant to be a quiet night in studying, turned out for me to be the resurgence of The Mother! A simple txt from my cousin alerted me to the fact that Wolfmother were doing a surprise gig at X and Y and that he was doing the sound! Why I say ‘Resurgence’ you ask? 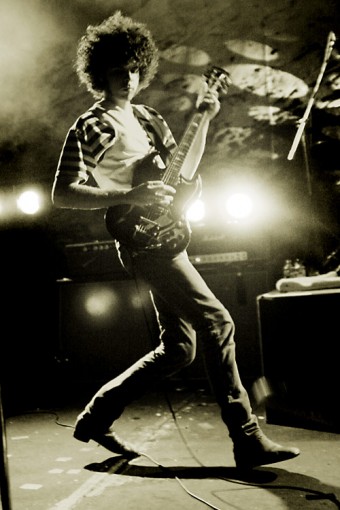 If you had witnessed Wolfmother at SITG 2009 you’d probably have the same outlook as me. A band that had lost motivation, a passion for what they were doing, and for most it was certain that they would never play again in their current formation. It turned out they did break up, but frontman Andrew Stockdale last night gave an indication that the insipid Splendour performance was a thing of the past and the Wolfmother of old are definitely back.

This intimate X and Y gig brought back what Wolfmother was all about, pure rock ‘n’ roll riffs, a mix of ‘Earth Wind and Fire’ and sheer jamming that attracted tens of thousands of fans, from not only Australia but around the world, following their release of their self titled debut album back in 2005.

It didn’t take long for the crowd to get into the swing of things with the band opening with ‘New Moon Rising’, followed by tracks such as, ‘Tales from the Forest of Gnomes’, ‘White Feather’, ‘White Unicorn’, ‘Woman’, ‘Riders on the Storm’ (The Doors Cover) and an encore that featured, ‘Joker and The Thief’. The crowd was amped and so was the band with charismatic Stockdale conversing with the crowd in a laid back approach, ripping on Cloudland across the road for turning them away as they didn’t have any food!

Stockdale with his new band members played this intimate gig on a spur of the moment decision. As Stockdale remarked, ‘I was sitting at home and I was like, let’s play a gig in Brisbane tomorrow night! So, our management rang X and Y and here we are!’ He later stated that the sole purpose of the gig was to introduce their new drummer Will Rockwell-Scott (Har Mar Superstar) to his local Brisbane crowd.

I left X and Y very content. The minute I got home and sat my feet up and I sifted through iTunes and listened to WOLFMOTHER’s debut album from start to finish.

If you enjoy Wolfmother and have a SITG 2010 ticket get across to see them for thoroughly enjoyable Rock ‘n’ Roll show!. WOOOOLLLFFMOTHERRR!!