Everything was coming up Daniel in 2010.

Unearthed by triple J in July for a spot at Gosford’s Coaster Festival in September. Pitched on Home & Hosed’s Next Crop and featured on Rage’s Indie of the Week for the video ‘Lost in the Moment’ in November. A debut EP released in October. Billed at Peat’s Ridge Sustainable Arts & Music Festival (which also featured Angus and Julia Stone, and The Shout Out Louds) to end the year in December. And moving into the New Year, the aforementioned single ‘Lost in the Moment’ is still receiving major airplay and sits on triple J’s hitlist. 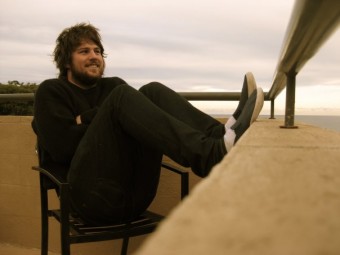 But after chewing the fat with DLK at the conclusion of the last decade it seems clear that the man from the Central Coast is not finished yet. Arriving on the scene with all the buzz of an instant success story- Daniel claims that this is far from the truth. In fact, despite a polished debut release and overwhelming support on national radio; Daniel explains that after years and years of playing shows to an audience of family and friends widespread recognition seems to be nothing more than a question of luck. It was not too long ago that I had dreams of being a rugby league superstar he laughs.

This unassuming charm is spread throughout his debut EP ‘Lost in the Moment’. Each track floats by effortlessly, and it is not until the fifth or sixth listen do you begin to notice the ambitious layering of emotive tones, electronic beats and acoustic arrangements that cover each melody. Thus, in the next breath DLK is able to cite Thom Yorke’s experimental piece The Eraser as a source of inspiration and adds that electronica is a genre that he really wants to explore perhaps even with a backing band.

Ultimately, it would seem that Daniel has his ears in the right place, and his eyes firmly set on the future. Yet it is hard not to think that he gives himself less credit than he is due. Luck you say. It was only a matter of time. Look forward to all things DLK in 2011.