REVIEW: Foxygen – We Are The 21st Century Ambassadors of Peace & Magic

Foxygen’s latest offering is a rollercoaster. And like any rollercoaster worth its salt, We Are The 21st Century Ambassadors of Peace & Magic will leave you with your head spinning, a giddy spring in your step, and, if you can get through it without wetting your trousers, feeling like the coolest motherfucker alive.

We Are twists and turns through a throng of musical influences with the frenetic panache of a go-go dancer on PCP. If it wasn’t for the sincerity oozing from every line, you could be forgiven for thinking that certain parts of standout track “No Destruction” were a Velvet Underground parody, Sam France’s voice carrying all the bored drawl and druggy lyricism of Lou Reed at his finest. Similarly, it’s hard to listen to the gloriously groovy “Oh Yeah” without imagining a set of Mick Jagger lips slinking and swaggering around lyrics like “I’ve got the movies and the discotheque inside my mind/ All the time, all night/ I’m feeling groovy on another one’s dime.”

As a two person ensemble, Foxygen use the modern miracle of overdub to develop a rich and heavily layered sound. The sound is founded on the interaction between driving rock n roll guitar and noodling bluesy keyboards. The interplay between these two instruments turns what could have been a straight out rock record into something more sophisticated. The constant instrumental back and forth keeps the record moving forward, and the added layers of instrumentation allow constant riffing away from the melody without detracting from songs’ coherence. On top of this musical base, strings, horns, and an array of production effects drift in and out, and yet the album never seems overworked or cluttered. There are plenty of innovative musical ideas tucked away through this album that will reward repeated listens. 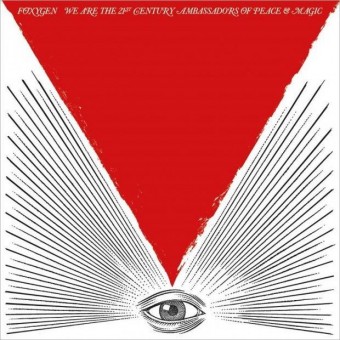 This audio amalgamation finds a strange cohesiveness thanks in large part to the production influence of Richard Swift (long-time singer-songwriter/producer and most recently keyboardist of The Shins). Nowhere does the novelty of the duo’s goofiness wear off; every throwaway lyric and wacky riff hits the mark. Every track on We Are is deeply engaging, heavy with a sense of youthful adventure. It’s also a dickload of fun – If you can get through “On Blue Mountain” without grinning like an idiot you’re doing better than me.

In the end it’s the pure wackiness on We Are that makes it the coolest record of the year so far. In a time when musicians seem afraid to express any genuine enjoyment of their music for fear losing their label as a ‘serious’ band, Foxygen is a breath of fresh air. The moment when “On Blue Mountain” transitions from yearning ballad to breakneck rocker is spine tingling stuff. The moment 2 and a half minutes into “Shuggie” where the song does a complete 180-degree turn to drop into a Bowie-esque funk riff has the same magic. Foxygen seems to take a wicked delight in taking their audience on a journey full of hairpin turns and off-piste slopes, it’s certainly enough to make you sit up and pay attention.