Monday mornings suck. The start of the work week, battling through a lingering hangover. A full five days until the promise of a weekend escape. They’re the worst. But this Monday the 30th of July is very different.

Yes it may come packed with a hangover erasing all forms of motivation to do anything other than lie very, very still and cut Fifa. Yes it may be another five days until the bliss of a weekend sleep-in. But this time it’s all very different; I will have just woken up from the greatest weekend of my life and I sure as hell ain’t going to work.

It’s Thursday morning and Friday can’t come quick enough. Marco made the right call and booked in a week of leave starting today. His pilgrimage from Brisbane began last night after a couple of false start, but no doubt he’s already cracked his first Chancer in the beautiful surrounds of Byron Bay.

Ditching the camping gear in favour of a unit close to the town center is a huge plus. A warm shower will be an absolute blessing come Monday morning. For those of you camping, despite the clear weather forecast, it would be wise to pack your wellies as it’s bound to get muddy. 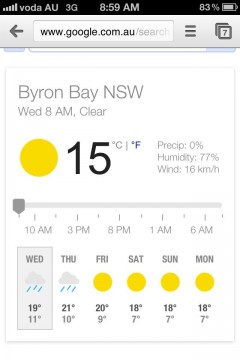 Without the need to worry about smuggling drinks into camp we were able to plan our drinking regiment with precision this year. James Squire Golden Ale is the tipple of choice followed by some B-cards lime & soda/Mojitos and Rekorderlig to ease into the mornings. Solid plan. But given past experience, plans tend to go swiftly out the window and Jager tips the balance in favour of the alcohol gods. Nek minnit, nek level…

Once we’re inside the gates at Belongil, after a free shuttle bus ride to the fields, it’ll be a swift walk to the Wine & Moët Champagne bar to meet with friends and ease into the day.

Friday is obviously highlighted by headliner Jack White but a quick scan of a timetable littered with gems will have your day booked up in no time. We’ll be kicking things off with Chet Faker, followed by Youth Lagoon, DZ Deathrays, Yacht Club DJs, Howler – a trip back to the wine bar – The Shins & Gypsy and the Cat.

Saturday is an absolute mess. This is by far the most epic back-to-back barrage of tunes all weekend. We’re frothing hard over The Cast of Cheers, Last Dinosaurs, Jinja Safari, Band of Skulls, Seekae, Tame Impala, Lana Del Ray, Miike Snow and Bloc Party.

Come Sunday, Rekorderlig will be the drink of choice to kick-start the day. Parachute Youth’s chilled out dance beats will be the best way to shake off a hangover and leave you thinking ‘it can’t get better than this‘. The Medics, Zulu Winter, Django Django,Yuksek, Metric, Wolfmother, The Kooks and The Smashing Pumpkins will wrap up another jam packed day of sonic goodness.

By the way, Mondays still suck.

Who are you excited to see at Splendour? Do you have any pre-Splendour rituals?